Small Business Admin. and Office of Management and Budget created a questionnaire without public input that asks about everything other than the economic uncertainty that Congress intended to drive program 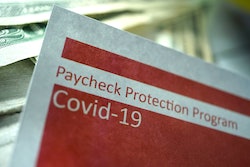 The Associated General Contractors of America filed suit December 8, 2020, to compel the Small Business Administration (SBA) and Office of Management and Budget (OMB) to revise the questionnaire being used to reassess whether companies were eligible for Paycheck Protection Program (PPP) loans. The construction association is also asking the federal courts to restrict use of the information that the questionnaire generates until the SBA makes it available to the public and revises it.

“The administration has every right, and obligation, to ensure businesses were eligible to apply for and receive the relief loans,” said Stephen E. Sandherr, the association’s chief executive officer. “But they do not have the right to use a secretly crafted form to gather unprecedented amounts of proprietary information that has little or nothing to do with the economic uncertainty that led businesses to apply for the loans in the first place.”

The complaint, which the association filed in the United States District Court for the District of Columbia, asserts that the process that produced the form, and the form itself, violate the Paperwork Reduction Act and the Administrative Procedures Act, and that the federal agencies failed to meet the minimum standards for due process. The association is requesting the court to declare that the questionnaire is arbitrary and capricious, and to declare that the SBA cannot lawfully use the information that the form generates to find a company ineligible for a PPP loan or deny a company’s application for forgiveness of its loan.

The association noted that the CARES Act (which established the PPP program) only required loan applicants to make a “good faith certification that the uncertainty of current economic conditions makes necessary the loan request . . . “ Instead of asking borrowers how they concluded they faced such uncertainty when applying for their loans, the form attempts to set a means test, a revenue reduction test and a liquidity test that Congress never contemplated, and it focuses on later events that few companies could have predicted when applying.

The two agencies also disregarded the legally mandated process for developing a questionnaire. OMB authorized the SBA to use the form in complete secrecy, instead of releasing it and providing a 60-day period for public comment. The agencies also violated the Administrative Procedure Act by arbitrarily declaring – to bypass the normal review process – that the new questionnaire required approval on an “emergency” basis and did not constitute a change in the scope of SBA’s prior information collection process.

“Resorting to a secret form that disregards Congressional intent and retroactively changes the criteria for a loan is not due diligence; it is unlawful and needs to stop before employers are irrevocably harmed,” Sandherr added.