Most of the drop owed to an 8.5% plunge in single-family housing spending but nonresidential was also negative, weighed down by falling power, commercial and manufacturing 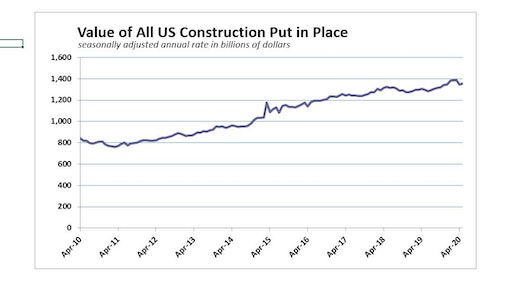 The coronavirus once again crushed the U.S. Commerce Department’s May construction value put-in-place estimates, which fell 2.1%. Construction spending has now fallen for three months in a row, a total of 5.9%, since peaking in February.

“The decline was surprising, as construction came back online relatively quickly following the lockdown,” says Mark Vitner, senior economist with Wells Fargo Economics. “Aggregate measures of construction activity, such as housing starts and construction employment, show more improvement. While many projects were quick to resume, many builders might have become more cautious about starting new projects.”

Some large municipalities were also slower in allowing construction to resume. The sudden halt to building activity in many areas may have created some unanticipated hurdles to restarting.

A survey by the Associated General Contractors of America and data from construction technology firm Procore show May construction activity is returning to pre-coronavirus (February/March) levels in many parts of the country and some firms adding workers. AGC analysis of May Bureau of Labor Statistics data shows construction employment increased in 92% of 358 metro areas. The AGC/Procore construction-activity data also shows some future projects being canceled and many others delayed by supply chain issues and labor shortages.

Much of the May decline in construction spending owed to a 4.0% drop on residential projects. Single-family outlays fell 8.5%, while multifamily rose 2.3%. Home improvement spending edged up 0.1%.

Nonresidential spending dipped 0.9%, but there was a significant divergence in public and private outlays. A 1.2% gain in public expenditures was driven by a 2.8% rebound in highway and street spending and a 1.2% climb in transportation outlays. Public education building expenditures also eked out a 0.1% rise. Despite this strength, the COVID-19 crisis has put the fiscal health of many state and local government under tremendous pressure. Declines in tax revenues will likely lead to large cutbacks in public construction projects this year and next, absent significant federal relief.

“It is likely that the pickup in highway construction and other public spending that occurred in May will fade as soon as current projects are completed,” said Ken Simonson, AGC's association’s chief economist. “Our latest survey of contractors, conducted June 9-17, found only about one-fifth of respondents had won new or expanded work—unchanged from early May. In addition, nearly one-third of respondents reported that an owner had canceled an upcoming project.”

Private nonresidential spending slipped 2.4%. Nearly every major subcategory declined. The 3.1% drop in the largest category, power, was an acceleration of the segment’s April loss. Perhaps more ominous is manufacturing construction’s turnaround. The segment managed a very slight gain in April, and fell 4.1% in May. The others of the largest five nonresidential categories dropped notably: