NAHB considers the fact that new home sales are 1.4% higher through April than the first four months of 2019 evidence that housing will be a leading sector in eventual US economic recovery 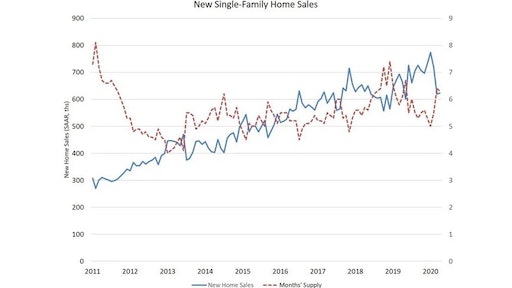 After weakening in March, the volume of new home sales came in much better than expected in April. Due to economic challenges associated with COVID-19, the National Association of Home Builders (NAHB) was forecasting an additional sales decline in April. However, new home sales estimates from the Census Bureau reveal relatively flat conditions compared to March.

The Census estimates reported a 623,000 seasonally adjusted annual rate in April, after a slightly revised 619,000 pace in March. The April rate is down approximately 20% from the peak rate in January. It is reasonable to expect a downward revision for the April data next month given persistent weakness in the labor market. Nonetheless, mortgage application data and anecdotal reporting from builders indicates that housing demand picked up in recent weeks.

Overall, the data lend evidence to the NAHB forecast that housing will be a leading sector in an eventual economic recovery. Consider that despite the recent weakness, new home sales are reported to be 1.4% higher through April than the first four months of 2019. Sales were likely supported by price incentive use in April, with NAHB data indicating that two out of ten builders used such business strategies. Indeed, median new home pricing fell to $309,900 in April, which was 8.6% lower than a year ago.

And months’ supply is at a reasonable level of 6.4 despite the ongoing recession. The count of completed, ready-to-occupy new homes is 78,000 homes nationwide. While March home sales were drawn more from completed, ready to occupy homes (40%), this share actually declined in April to 35%. The share of not started homes sold increased to 30%, which is a positive indicator for future housing starts.

It is likely the April data will be downwardly revised given other economic data. However, given the momentum housing construction held at the start of 2020, the housing industry will help lead the economy in the eventual recovery and the April data is broadly consistent with that conclusion.

Dodge Data & Analytics forecasts construction starts to rebound in 2021 and 2022, with the prospect of far greater gains if even a projected $550 billion “middle of the road” infrastructure spending plan is passed.
Becky Schultz
Jun 7th, 2021

Institutional building rebound lifts Dodge Construction Index in April, panic over the global lumber shortage pushed July futures for 2x4s to $1,481, a crack shut down the Desoto Bridge carrying I-40 across the Mississippi River
May 19th, 2021

AASHTO President says Congress should consider a mix of new short- and long-term funding options to provide more fiscal support for transportation investments nationwide for both the immediate and future needs of our roadways
Jessica Lombardo
May 19th, 2021

US new home construction dropped precipitously and permits were weak in the face of unprecedented demand for new homes, but multifamily construction showed signs of revival
Larry Stewart
May 18th, 2021

The not seasonally adjusted construction unemployment rates rose nationally and in 33 states, fell in 15 states and were unchanged in two states.
Associated Builders and Contractors Inc. (ABC)
Apr 30th, 2021

Forecast expects 2021 construction spending growth but not return to pre-pandemic strength, and inflation that could force the federal reserve to tighten policy more aggressively than planned
Larry Stewart
Apr 28th, 2021

Cliff Fetner, Soil Connect, and Aaron Toppston, The Walsh Group, examine the key trends behind the substantial increase in tech adoption in construction, as well as how to assess the value of technology investments.
Becky Schultz
Mar 24th, 2021

Engineering and construction costs continued to rise in March, with increases shown in all categories of materials and equipment.
IHS Markit
Mar 24th, 2021

The Architecture Billings Index (ABI) -- a 12-month leading indicator of construction work -- is back in positive territory for the first time since February 2020 and the start of the COVID-19 pandemic.
American Institute of Architects
Mar 24th, 2021

Concerns about finding skilled workers, material costs and steel tariffs still linger for construction business owners though according to the latest data released by the U.S. Chamber of Commerce
Mar 18th, 2021

Almost all of the job loss was in nonresidential construction, a segment in which employment declined by 60,800 jobs on net in February.
Associated Builders and Contractors Inc. (ABC)
Mar 5th, 2021