US housing construction fell significantly lower than forecast in the first full month of COVID-19 pandemic response, but the builders are already showing signs of resilience 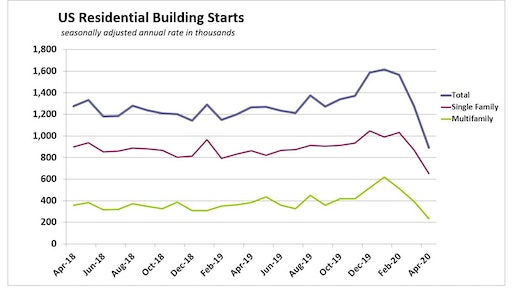 U.S. housing starts plunged 30.2% in April to an 891,000-unit seasonally adjusted annual rate that outstripped economists’ forecasts in a Reuters poll who expected a fall to 927,000 units. The April result was the lowest level of housing construction since early 2015, according to U.S. Department of Commerce numbers released today. 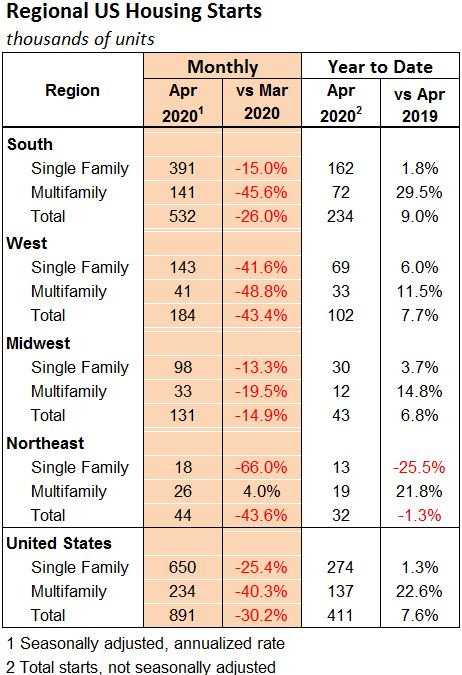 Many states considered homebuilding as essential when they enforced lockdown orders in mid-March to curb the spread of COVID-19, the respiratory illness caused by the coronavirus. But disruptions to building material supply chains have likely weighed on activity since the pandemic response began. An Associated General Contractors survey from the first week of May adds context to the status of construction investment: 37% of contractors say their owners voluntarily halted work out of fears of the pandemic. Thirty-one percent report canceled projects because of a predicted drop in demand. And 21% report projects canceled as a result of lost private funding.

“April’s decline largely reflects plunges in building activity in large states, some of which did not deem home construction an essential business,” says Mark Vitner, senior economist with Wells Fargo Economics. “But activity also pulled back even in states where homebuilding was deemed essential, as builders grew cautious amidst a nearly complete lull in demand as well as growing concerns about apartment tenant demand and the ability to collect rents.”

Permits for new construction fell 20.8%, but remain at a 1.074 million-unit pace that suggests builders are still planning construction.

Housing demand derives from underlying economic growth and the economy turned steeply into recession in April. Initial unemployment claims suggest more than 30 million jobs have been eliminated since early March. Fewer people are going to be interested in committing to a new mortgage when they are concerned about their job and income prospects.

Reuters reports economists expect the housing market downturn, together with a collapse in consumer spending, business investment and manufacturing, will result in gross domestic product (GDP) shrinking at as much as a 40% pace in the second quarter, the deepest since the 1930s. The economy contracted at a 4.8% rate in the January-March quarter.

Vitner's analysis points out that the just over half of job losses so far have been concentrated in the leisure, hospitality and retailing sectors, where part-time employment tends to be more common. Those losses are being felt most heavily by apartment owners. Recent wage gains had been pushing rent increases, but now they’re likely seeing the most delinquent rents and rising vacancies. Luxury and lifestyle communities appear to have dodged a bullet, as many of their tenants are now working from home. The wave of new construction currently underway that will likely be delivered in a weak job market.

“Demand for single-family homes has proven surprisingly resilient,” according Vitner. “While showings of existing homes were largely forbidden during April, buyers apparently returned later in the month. Mortgage applications for the purchase of a home have rebounded solidly and searches for new homes on Google have rebounded back to pre-shutdown level.

“April’s drop in starts also reflects some payback from the strong start to the year. Even with April’s drop, single-family starts through the first four months of this year are running 1.3% ahead of their year-ago level, and are up in every region except the Northeast, where they are down 25.5%."

A signal that the housing market is showing signs of stabilizing in the wake of the COVID-19 pandemic comes from builder confidence for newly-built single-family homes increasing seven points to 37 in May, according to the latest National Association of Home Builders/Wells Fargo Housing Market Index (HMI). The rise in builder sentiment follows April’s largest single monthly decline in the history of the index. 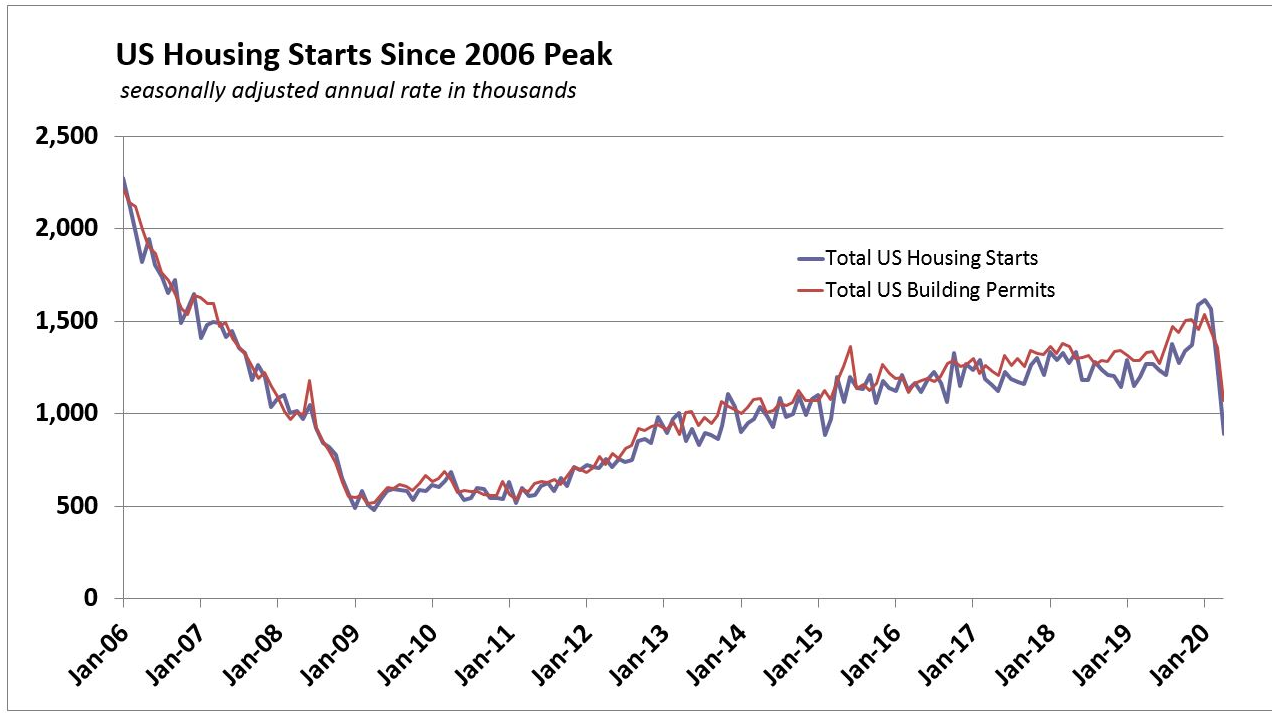 How to Keep Workers Safe and Stay in Compliance with PPE