Fourth month of growth in the value of construction put in place lead again by single-family residential strength, but there was a shakeup in nonresidential construction 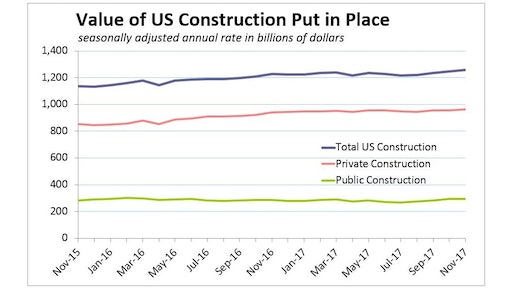 Construction spending was up 0.8% in November on broad-based strength. Both public and private spending increased for the third straight month.

Construction spending was up 0.8% in November on broad-based strength. Both public and private spending increased for the third straight month. Public spending has gained traction in recent months, but remains down 2.8% year to date.

The Wells Fargo Economics Group’s analysis of the U.S. Census Bureau’s monthly estimates of value of construction put in place says revisions to the October numbers brought growth in total outlays to an 8.8% three-month-average annualized growth rate in November. 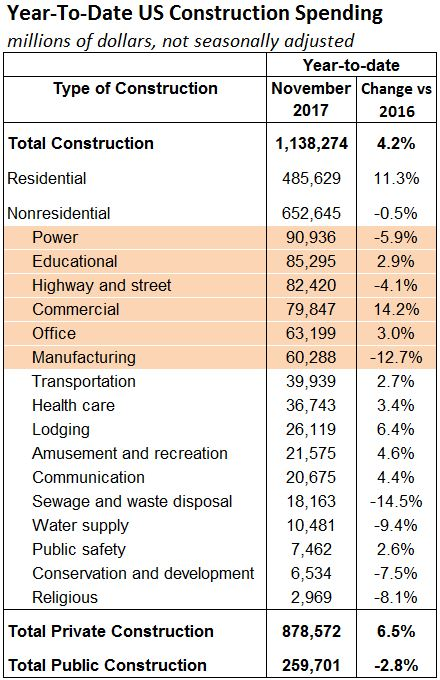 The six largest nonresidential construction segments make up 71% of all nonres. spending. Year-to-date spending has fallen in three of those segments -- power, highway and street, and manufacturing. Only about 78% of those losses have been offset by growth in the other three leading segments -- educational, commercial and office construction.

Gains were largely driven by the residential sector, which rose 1.1%. A 1.0% rise in private residential spending was driven by outlays for single-family homes and repairs. Spending for private multifamily projects was down in November but remained positive year to date.

“There are several possible explanations, including growing concerns about overbuilding in a number of large metropolitan areas in the lodging, office and commercial categories,” said Basu. “Financiers may also be less willing to supply financing to a variety of private projects given such concerns.

“At the same time, the U.S. housing market is the strongest it has been in at least a decade, raising sales prices and expanding assessable residential tax bases. That in turn has supplied additional resources for infrastructure. Over the past year, this has been particularly apparent in the educational and public safety categories.”