Zoning Wouldn’t Have Saved Houston From Harvey; Less Sprawl Would Have Helped

Pro-business dis-regulation magnified Houston flood devastation for a third year in a row, and will again if Harris County won’t match development with flood control 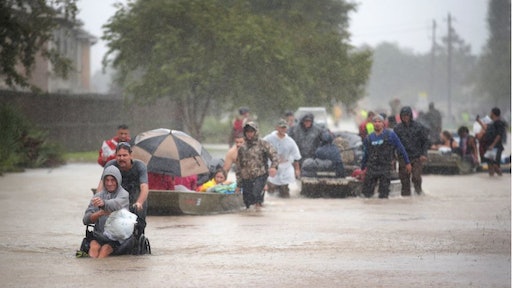 Comprehensive zoning wouldn’t prevent the sort of sprawl that makes Houston more prone to the flooding which low elevation and the proximity of a warming ocean makes likely. Easy access to tax-exempt financing that allows developers to bootstrap their own infrastructure is what’s feeding massive sprawl in the U.S.’s fourth largest city.

Greater Houston is notoriously light on zoning, but the bigger problem is a lack of regional planning. Development has overwhelmed the city’s World War II–era reservoir system of flood control and consumed the wetlands that absorb excess rainwater.

Research by Texas A&M scientist John Jacob shows that almost 30% of freshwater wetlands in Harris County were lost between 1992 and 2010, a figure he calls “unconscionable.”

As wetlands have been lost, the amount of impervious surface in Harris County increased by 25% from 1996 to 2011.

There are 140,000 homes in the 100-year floodplain in Greater Houston. That’s bad, since Houston has had eight once-in-a-century storms since 1989. But Houston has now suffered “500-year floods” – there should only be a 1-in-a-500 chance of occurring in any year – for three straight years now. No city is prepared for that, much less a city with as limited a planning process as Houston’s.

First steps toward saving some of the lives and property lost to U.S. flooding, may be as simple as properly enforcing current regulations.

Federal rules require certain homeowners to carry flood insurance, but those rules are based on outdated flood data. Only about 25% of homes at “high risk” in Harris County have flood insurance. The share is even lower, 15%, in many other areas that will also no doubt suffer water damage from Harvey.

Just ten days before Harvey struck, President Trump signed an executive order that rescinded federal flood protection standards. FEMA and the US Housing and Urban Development Department, the two federal agencies that will handle most of the huge pile of cash expected for rebuilding of Houston, would have been forced to require any rebuilding to conform to new, safer codes. Now they won’t.

President Obama had greatly expanded the number of wetlands protected by the Clean Water Act. This federal law requires developers who destroy wetlands to mitigate the ecological effects, for instance by creating new wetlands elsewhere. In February, the Trump administration said it would reverse Obama’s decision (a process that is still unfolding), meaning a lot more wetlands would lose that protection.

Not that Houston has ever been a stickler for federal rules. To get a permit under the Clean Water Act, developers who build in protected wetland areas must submit paperwork showing they’ve completed mitigation measures. In 2015, Texas A&M and non-profit research group HARC analyzed a sample of permits issued from 1990 to 2012 in greater Houston. They found that in fewer than half of the cases had the developers submitted complete paperwork, and in two thirds of the cases, there was no documentation that any type of mitigation had happened. Another study looked at a dozen projects that had obtained permits, and found that only two of them had successfully offset wetland destruction, seven were partially successful, and three were complete failures.