Trump’s election rejuvenated real-estate-market enthusiasm in late 2016 but mid-year 2017 results suggest decoupling, with confidence in Trump plummeting and the market moderating only slightly 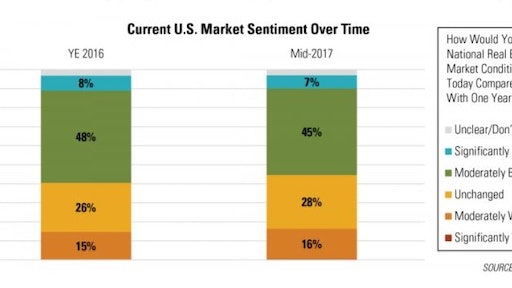 The percentage of survey respondents who say U.S. real estate market conditions are moderately or significantly better today than they were 12 months ago dropped four percentage points since the end of 2016 to 52%.
RCLCO Real Estate Market Sentiment Survey, Mid-Year 2017

Advisor to the real estate industry RCLCO’s last industry sentiment survey at the end of 2016 reported new-found optimism for the real estate market buoyed by promised changes coming to the federal government. Many of the experienced real estate, development and builder respondents indicated that the likelihood of tax reform, deregulation, and other business-friendly policies would extend, and perhaps even lift, the then eight-year economic expansion.

The results from the current, midyear 2017 Real Estate Market Sentiment survey are clear: enthusiasm for the new president and his ability to deliver on policies has faded, but outlooks remain cautiously optimistic. There is widespread agreement that while the current cycle may be sunsetting, fundamental conditions remain strong for the near- to mid-term.

“Current sentiment is somewhat lower today than it was six months ago, and respondents predict sentiment will be lower this time next year,” according to RCLCO’s commentary on the survey results. “In other words, the real estate markets continue to experience the characteristics of the mature phase of the current real estate cycle."

Real estate executives who predict the downturn will begin in 2019 rose 16 points since year-end to 65%, while those who predict a 2018 downturn fell 14 points to 26%.RCLCO Real Estate Market Sentiment Survey, Mid-Year 2017