New Housing Normal: Realities that Will Limit a Strong 2017

The US housing market is shifting to single-family strength and accelerating, but systemic headwinds are unlikely to allow a return to pre-recession norms this year 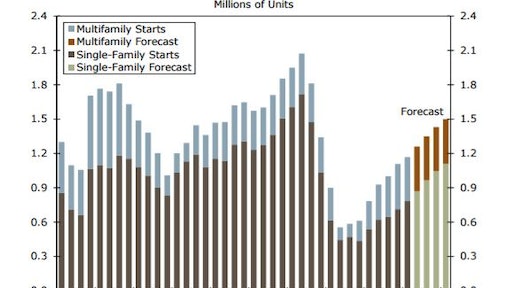 Wells Fargo’s Economics Group identified headwinds its analysts believe will usher in a new normal for U.S. housing starts at about 1.6 million units, 100,000 units below what had been normal for decades before the Great Recession.

Here are the limiters

Wells Fargo expects conditions to improve on nearly all fronts in 2017. Job and income growth are strengthening to the point that consumers are taking notice and a larger proportion of consumers feel confident enough to purchase a home (Figure 4).

Millennials are also reaching the life stage – the leading edge of the generation turns 37 this year – where home ownership tends to rise. Unfortunately, the data show that Millennials have delayed most milestone decisions, such as moving out of their parents’ homes, getting married and having children. “We doubt the (home-buying) light switch will suddenly turn on in 2017,” according to Wells Fargo’s analysis.

Should housing demand surge, the inventory of homes for sale remains exceptionally tight and new construction remains bogged down by high costs, regulations, and shortages of developed lots and construction workers. Supply constraints will not clear easily, or soon, so Wells Fargo expects home prices to continue rising faster than incomes this year, which should dampen demand.

While Wells Fargo expects a relatively strong year for new and existing home sales, “We still believe a return to the conditions that existed in the decades prior to the housing boom remain a long way off,” according to special commentary issued last week. “We expect new home sales to rise 12.3% this year to 630,000 units and look for housing starts to rise 7.3% to 1.26 million units (Figure 2).”

Single-family starts have remained above 800,000 units for the past five months. That strength was accompanied by a pickup in the NAHB/Wells Fargo Housing Market Index report, which jumped 6 points in March to its highest level since June 2005. Housing is one area where the hard data and soft data are truly in sync.

Apartment construction appears to be cooling slightly. Multifamily starts reported a weak start to 2017, with starts fell 7.3% in January and 3.7% in February. But the declines come onthe heels of a massive jump in December.

Apartment effective rent growth has slowed, falling to 3.6% in Q4 compared to Q4 2015. The business is slowing fastest in more-expensive major markets such as New York, Boston, San Francisco, D.C. and San Jose. With rent increases slowing and capital becoming dearer, starts of projects with five units or more are expected to decline modestly this year.

The post-election surge in consumer confidence is also evident in consumer attitudes toward home buying. The Fannie Mae Home Purchase Sentiment Index rose 5.6 points in February to an all-time high (88.3) for the survey.