Single-family February US housing starts were revised up to a post-recession high, but wintry March weather dampened both single- and multifamily starts in March 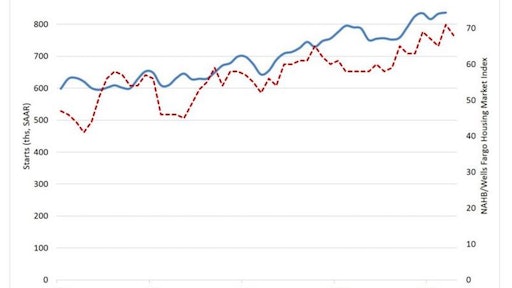 The three-month moving average of single-family starts reached a post-recession high in March, and NAHB is forecasting continued growth for this sector as the year progresses.
National Association of Home Builders

Total U.S. housing starts in March fell 6.8%, below consensus forecasts, to a 1.215-million-unit seasonally adjusted annual rate, according to the U.S. Commerce Departments monthly estimates. The pullback in March comes after February set a strong annual rate at 1.303 million units, which received a boost from mild weather allowing more projects to get underway than in years past.

The early start to the spring building season will likely continue to result in more volatile seasonally adjusted data in spring months. But total housing starts across the first quarter of the year are more than 9% above the first three months of 2016. This strength is reflected in the NAHB/Wells Fargo Housing Market Index, which hit a cycle-high in March before falling back slightly in April.

Underlying fundamentals, including an incredibly lean supply of existing homes for sale in many markets and continued improvement in the labor market, support continued strength in home builders’ confidence in the new home market in 2017. Reports from recent consumer sentiment surveys also suggest more people feel that now is a good time to buy a home. Moreover, higher mortgage rates since the election do not appear to be weighing much on mortgage applications, which hit a cycle high in April.

US Construction Spending Surprised with March Slip after February Record