Analysis suggests construction growth gaining momentum in the second half of 2017, and proposes reasons to expect not just solid, but spectacular 2018 follow through 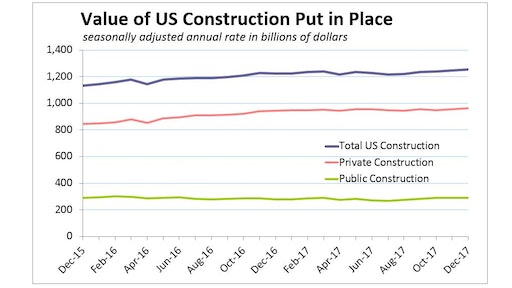 The value of all construction put in place in December managed a 0.7% rise to a seasonally adjusted annual rate of $1.25 trillion on solid growth in both private and public spending.

The value of all construction put in place in December managed a 0.7% rise to a seasonally adjusted annual rate of $1.25 trillion, according to monthly estimates by the U.S. Census Bureau.

Nonresidential construction spending expanded 0.8% in December for a seasonally adjusted annual rate of $720.4 billion. The Associated Builders and Contractors’ (ABC) analysis of the Census data points out that this is the fifth consecutive month during which the pace of nonresidential spending has accelerated.

Total value of construction spending for the year (not seasonally adjusted) came in 3.8% higher than 2016 despite a nearly 11% aggregate drop in the six largest nonresidential spending categories: power, educational, highway and street, commercial, office and manufacturing.

A 13.5% leap in commercial construction spending for the year largely offset a 12.6% plunge in manufacturing construction. But nonresidential spending’s largest sector – power – fell 6.3% to overshadow 2.5% growth in the hefty educational sector and 2.1% growth in office construction.

The energy that lifted U.S. spending came from housing. Residential spending for the year – a segment that’s now slightly larger than the sum of the six biggest nonresidential segments – jumped 10.4% to $522.3 billion. 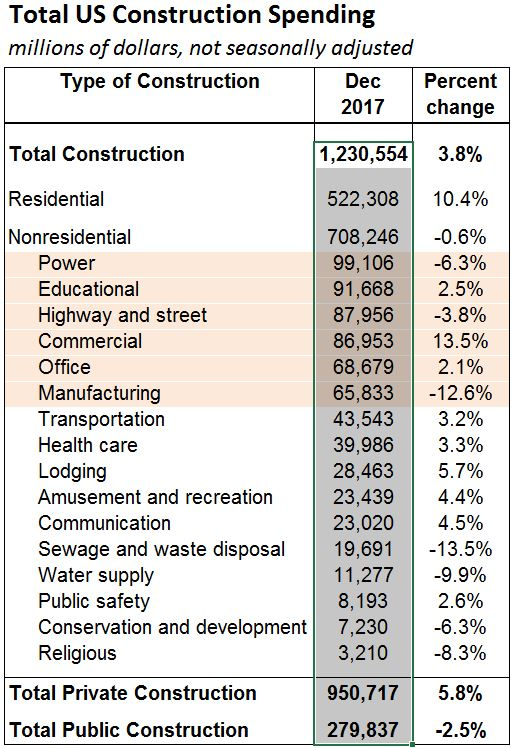 Public construction spending fell 2.5% during 2017 more than doubling its 1.2% decline in 2016. Public spending on in its Public spending’s largest sector – highway and street –declined 3.7% to $87.7 billion.

Wells Fargo Economics Group’s analysis of the monthly figures suggests U.S. construction spending gained momentum in the second half of 2017.

“Total construction outlays increased every month since August on stronger readings for both public and nonresidential outlays,” according to Wells Fargo. “That is a considerable improvement relative to 2017 as a whole. Transportation spending appears to have helped both categories [public and private spending] in the second half of 2017.”

The ABC Chief Economist Anirban Basu says tax reform will add to construction growth, but points out the potential for federal action to turn up construction’s growth dramatically.

“Even before the United States enacted tax reform, global and domestic financial systems were flush with liquidity and capital,” said Basu. “The tax cut will further bolster liquidity and confidence, which will ultimately translate into more construction starts and spending. If long-awaited progress is made on infrastructure spending, the construction recovery will likely transition from solid to spectacular. During much of the past three years, spending growth generally has been concentrated in a number of key private construction segments, while public construction has tended to lag.” 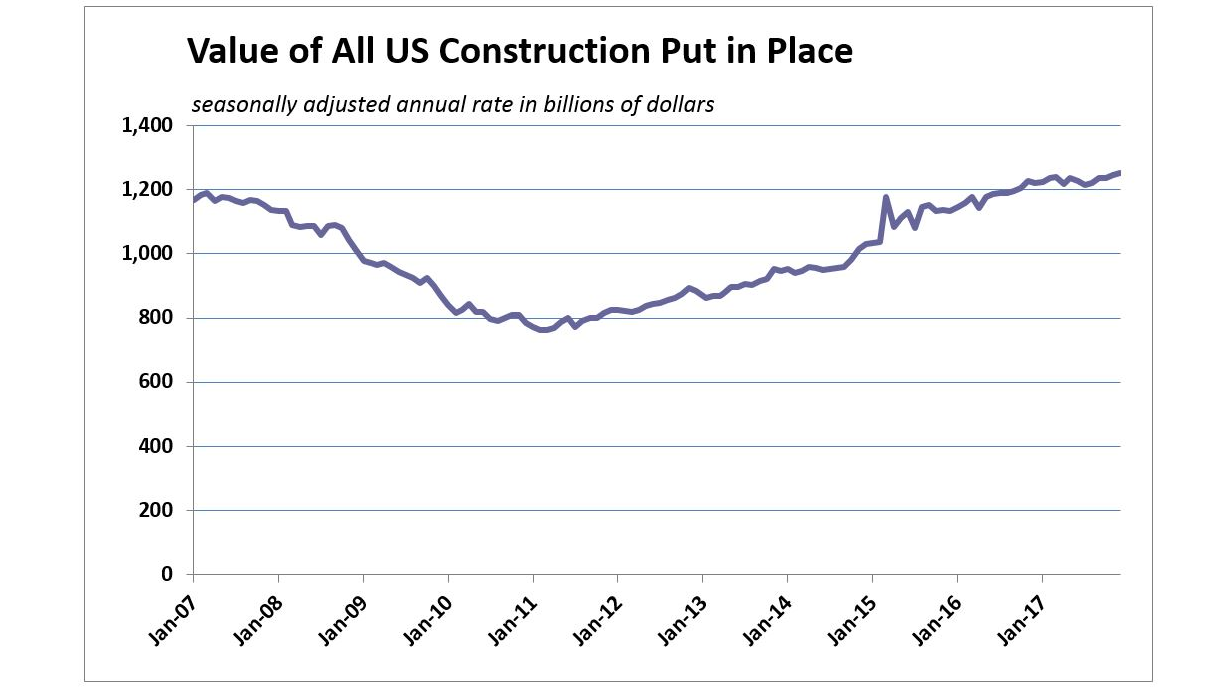 Value of U.S. construction put in place has exceeded the pre-recession peak since mid-2016.