The Detroit ePowertrain will offer an eAxle design operating at 400V and be offered in two variants suitable for a variety of commercial vehicle applications. 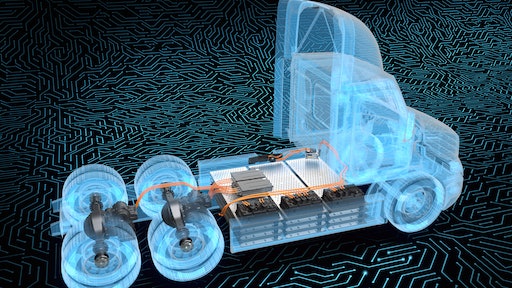 Daimler Trucks North America (DTNA) introduces the proprietary Detroit ePowertrain to power the upcoming Freightliner eCascadia and Freightliner eM2. It is part of Daimler Trucks’ global platform strategy to establish a uniform basic architecture for its broad lineup of battery-electric vehicles around the globe. Its use in North America brings the company unprecedented global synergies and economies of scale for CO2-neutral commercial vehicles.

Also included are plans for a $20 million dollar investment in the Detroit manufacturing facility located in Detroit, Michigan, which will serve as the North American source of Detroit ePowertrain components.

“By utilizing our Detroit ePowertrain to power the Freightliner eCascadia and eM2, we are giving Freightliner buyers the same level of confidence that comes with our conventionally-powered portfolio, known throughout the industry as having the best total cost of ownership – bar none,” says Richard Howard, senior vice president sales and marketing, on-highway segment, DTNA. “Nowhere else can buyers find the level of performance, support, quality, dedication to uptime, and engineering expertise as with our Detroit product portfolio. Our investment in Detroit - and in the city of the same name - harkens a new era for a storied name in the global automotive landscape.”

Initially, the Detroit ePowertrain will offer an eAxle design operating at 400V and be offered in two variants suitable for a variety of commercial vehicle applications. The single motor design is rated at 180 hp, delivering maximum torque of up to 11,500 lb.-ft. of torque, while the dual motor design offers up to 360 hp and 23,000 lb.-ft. of torque. The Detroit ePowertrain will be mated to the choice of three battery offerings for the eCascadia and eM2, including a 210 kilowatt hour (kWh) version, a 315 kWh version, and a 475 kWh version. Battery packs are comprised of arrays of lithium-Ion prismatic cells. In Detroit’s first ePowertrain offerings, the maximum range specifications will exceed 230 miles on a full charge for the medium-duty eM2 and 250 miles for the Class 8 eCascadia tractor.

“The combination of Freightliner and Detroit has been delivering an incredible experience to our valued customers for over four decades,” said Rakesh Aneja, head of eMobility at DTNA. “An integrated ePowertrain from Detroit respects that legacy and moves us into a new era for the industry by improving operational efficiency while simultaneously eliminating tailpipe emissions.”

Initial production of the Detroit ePowertrain is expected to begin in late 2021. The start of production for both Freightliner models begins in 2022.

Perkins to Focus on Future at ARA Show 2020

Mortenson is teaming with Built Robotics to solve issues on remote sites and cope with labor shortages through fully autonomous construction equipment
June 5, 2019

Electric Self-Propelled Scissor Lifts were the only equipment type to see rate increases of over 2%. Crawler-Mounted Hydraulic Excavators had the second largest increase, at 1.51%.
EquipmentWatch
April 24, 2019

Used Equipment Outlook for the First Half of 2019

For those looking for a used machine, the combination of more availability and lower demand makes it a great time to pursue a purchase.
January 14, 2019

“Our 2019 guidance reflects the healthy momentum we see going into year-end and our confidence that positive conditions will prevail in the coming year," says Michael Kneeland, United Rentals CEO.
United Rentals Inc.
December 19, 2018

Do You Need a Crane Operator Certification?

On December 10th, OSHA’s Crane and Derricks in Construction Rule went in to effect and there are two criteria the asphalt pavement industry should be aware of
December 17, 2018
Business

The Silver Lining of the New Lease Accounting Standard

Not only are many of the lease accounting changes relatively neutral, there is actually a silver lining with numerous positive impacts, says ELFA president
December 17, 2018

Video series looks at how technological advancements have changed infrastructure and what to expect going forward
Topcon Positioning Systems
November 28, 2018

Construction workers are at high risk for lung cancer and other lung diseases and should take proper care and precautions to keep healthy
October 26, 2018