CONEXPO-CON/AGG Preview: AT Cranes Get Focused on North America 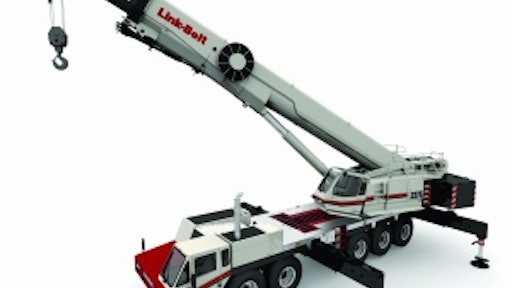 Link-Belt Construction touts its new 275-ton ATC-3275 as "the first all-terrain crane engineered with a focus on the North American market."

A modular counterweight system is specifically targeted to ensure transportability. None of the weights is more than 22,000 lbs., allowing them to be grouped together or with other components on transport trucks to maximize the loads. The entire unit with maximum counterweight, rigging, matting and fly extensions can move with just four truckloads.

Also available is inter-axle and cross-axle differential locking. Military-grade, two-piece aluminum wheels require no special tools to service in the field. Comfort is maintained via a Hydrogas suspension system.

The seven-section boom is fabricated from ultra-high-strength steel in Link-Belt’s own facility. The two-plate design of each section has multiple longitudinal bends for added strength. Teflon inserts keep the boom lubed and are universal for all boom sections. Eight boom modes maximize capacities by varying the extension of the sections.

The upper engine mounts transversely to allow maximum space for the stowable fly. A 12-ft heavy-lift fly has lift procedures for two load lines, making it suited for tilt-up work. An optional three-piece bi-fold fly hydraulically offsets from 2° to 45°. A manual, four-position offset is also available. Managing lifting functions (rated capacity limiter, boom telescope, etc.) will be a newly developed control system that will debut at the show.

Sort through specs and features from 15 major skid steer manufacturers to find just the right skid steer for your construction business.
July 13, 2021