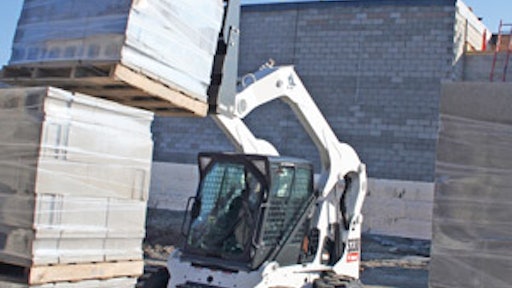 Bobcat Gets Bigger and Better
At a 3,300-lb. rated operating capacity and a 10-ft. 10-in. lift height, the Bobcat S330 skid-steer loader is the company's largest model. The vertical-lift path S330 builds upon the existing product line, while offering more lift capacity, increased horsepower and an improved cooling system.

Operators can quickly and easily switch between attachments via the Bob-Tach attachment mounting system or optional hydraulic Power Bob-Tach system.

The onboard computer senses and evaluates each load and allocates power where it's needed. In addition, four work modes adjust machine output by simply dialing the engine throttle to the specific setting.

Every major component of the X2 series is designed for maximum strength, support and durability. Maintainability has also been improved thanks to extended service intervals, ground-level access to service points and onboard diagnostics.

"The L175 includes many of the same features available on New Holland's other skid-steer models, such as the patented Super Boom vertical lift linkage for better dump height and reach, a long wheelbase for exceptional stability, fast ground speeds and no rear towers to impair visibility," says David Daniels, brand marketing manager.

A full 10-ft. lift height and 29 in. of forward reach are combined with optimal stability to allow the machine to move bigger loads, enhancing productivity. Optional features include a two-speed configuration and deluxe cab with air conditioning.

According to Dave Wolf, Case marketing manager, these full-sized excavators feature measurable increases in fuel efficiency and productivity. "During testing, we were seeing almost a gallon an hour difference in fuel use," he states. "If you multiply that times 2,000 hours of operation per year times $2.50 a gallon for diesel fuel, that's a savings of $5,000 per year that goes straight to the bottom line."

The CX B Series also offers a 17% increase in horsepower, thanks to the use of electronically controlled, common rail Tier III-certified engines. The units are rated from 120 to 207 net hp. Hydraulic horsepower has also been increased 4% to 10% across the line.

The ultra-quiet (68.6 dBA) cabs offer independent seat adjustment from the joystick controls, as well as memorized operator adjustment. An air seat is optional. Other features include left- and right-hand console changes, improved visibility and the ability to store up to 10 auxiliary hydraulic flow patterns.

Maintainability and serviceability have been improved 39%. Service features include a green plug for easier, cleaner engine oil changes; easier access to the engine oil filter; relocation of the hydraulic oil filter in the pump house; and ganging together of grease zerks.

The unit's 26-hp Kubota liquid-cooled diesel engine provides a combination of high torque rise, low noise and vibration and cleaner emissions. Other features include a reinforced, integrated mainframe and four-wheel drive with a differential rear-axle lock.

The B26 incorporates a braceless loader frame that improves forward visibility. Loader lift height is 7 ft. 10 in. with a capacity of 1,300 lbs. A skid-steer-type quick coupler enables use of a variety of front implements. A third-function auxiliary hydraulic valve is an available option.

The Category I three-point hitch can lift 1,676 lbs. at 24 in. behind the lift points, and stores in a convenient onboard space when not in use. The hydraulic independent PTO enables PTO engagement without having to stop the tractor.

The backhoe produces more than 4,000 lbs. of bucket breakout force and a digging depth of 8 ft. 4 in. A quick-mount system is standard. An optional backhoe auxiliary kit allows operation of various hydraulic tools.

Deere Builds Up Its D-Series
Three new models in the John Deere D-Series excavator line include the 160D LC, 200D LC and 225D LC. In addition to retaining many features of their predecessors, the new models offer faster hydraulics, a redesigned cab, undercarriage enhancements and a new cooling

Liebherr Gets Into the Compact Swing
Liebherr introduces the R 924 Compact Swing excavator, its first minimal tailswing model available to the U.S. market. The unit has a swing radius of less than 6 ft., yet delivers 32 ft. 10 in. of reach and 28 ft. 3 in. of dump height. Its 164-hp Liebherr four-cylinder diesel engine and electronic regulating system efficiently convert engine output into hydraulic performance.

The new model has an operating weight range from 52,690 to 58,643 lbs. and bucket capacities from .46 to 1.57 cu. yds. Its rugged undercarriage is designed for stability on a range of terrains.

The operator's cab is designed according to the latest ergonomic principles. The over-size windows provide an unobstructed panoramic view of the entire work area. Automatic climate control is standard; sensors continuously monitor the temperature settings to ensure operator comfort.

Critical service points are all concentrated in one location, which is easily accessed from the ground. The swing drive is completely maintenance free due to the semi-automatic central lubrication system.

Specific to the EC160C and EC210C is a strengthened high-tensile steel undercarriage frame and sealed-for-life greased track link. The EW160C and EW180C feature a strong undercarriage that enables jobsite speeds up to 22 mph. The dozer blade and wide-gauge outriggers allow the units to lift, load or grade as required.

Caterpillar's Largest Backhoe to Date
With a standard backhoe digging depth of 17 ft. 3 in., the 450E is the largest backhoe-loader in the Caterpillar lineup. A new extendible stick pushes digging depth even further to 21 ft. 4 in. A pilot-operated joystick control system allows for ease of backhoe operation.

Loader productivity is also greater than the previous model (446D) due to a larger bucket, increased hydraulic flow and stronger rimpull. The general-purpose loader bucket offers a 1.75-cu.-yd. capacity.

To further enhance the efficiency of its backhoe-loader line, Caterpillar is providing the AccuGrade machine control and guidance system as a factory-installed option. Two systems are available. The site reference entry-level grade and depth check system enables the operator to excavate to pre-determined coordinates. The more advanced laser reference system utilizes an off-board laser transmitter to set a grade reference; it is available factory installed or as an easy upgrade from the site reference system.

Industrial loader addition
Caterpillar broadens its industrial loader line with the addition of the 414E IL, featuring seat-mounted joystick implement controls. With just one joystick, the operator gains full control of all five functions (raise, lower, float, tilt and pitch) of the three-point tool carrier, along with the ability to activate auxiliary hydraulics and work tools.

The Category II three-point hitch is fully integrated into the purpose-built box section frame, and is compatible with a wide range of Caterpillar and existing aftermarket work tools. The front loader is the same used on the 416E backhoe-loader.