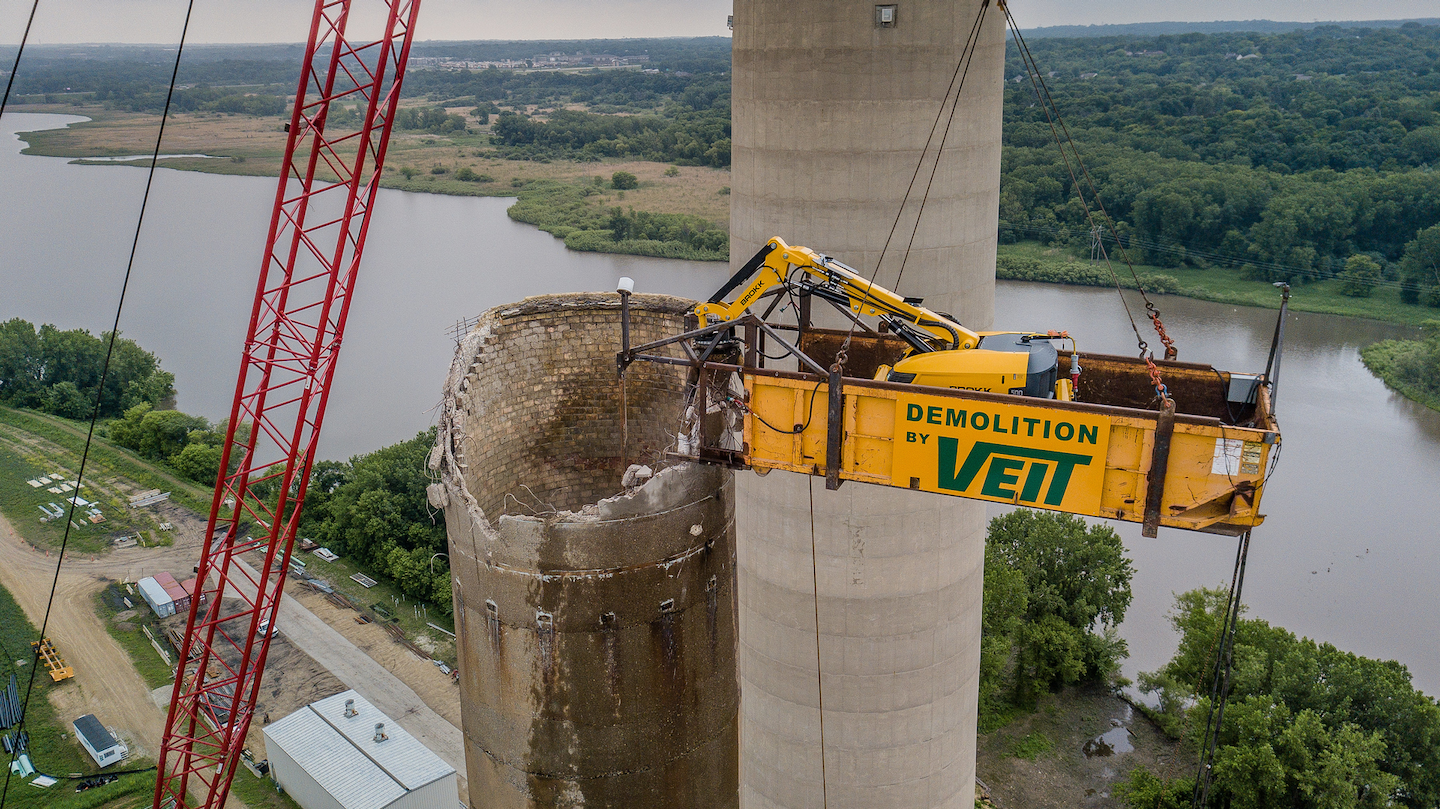 A 450-ton Manitowoc 2250 crane outfitted with a custom box lifts and carries the Brokk 500 during the demolition process.Brokk Inc.They went from being a skyline staple to an obsolete eyesore. Since the 1950s, the Xcel Energy Black Dog power plant smokestacks punctuated the Burnsville, MN, skyline. But the view is changing, as the iconic smokestacks are being demolished, marking the official end of the plant’s coal burning days.

In an effort to reduce carbon dioxide emissions, Black Dog is one of the latest U.S. power plants to convert from coal to natural gas. The process — expected to cost $100 million — began in 1999, when two units were replaced with natural gas. The most visible changes started in July 2018, when Veit & Company, a Minneapolis-based specialty contractor, utilized robotic demolition to begin the next phase of the process.

Black Dog brought in coal from Wyoming’s Powder River Basin for more than 60 years, first on barges coming down the Minnesota River, which surrounds the plant, and then by railcar. Seeking to slash their carbon dioxide output, Xcel set a goal to produce 63% of its electricity from carbon-free sources by 2030. During its last year burning coal — 2014 — only two of the four original units were still operational. That year, the plant was still burning 12,500 tons of coal each week, releasing in 1.9 million tons of carbon dioxide into the air, according to state data.

Black Dog isn’t the only company that has made its mark as a historical establishment. Veit boasts an even longer history of serving the region. Frank Veit founded the company in 1928, and 90 years later, it’s still family owned and operated. Vaughn A. Veit is the third-generation owner, preceded by his father, Arthur. Throughout its storied history, Veit led the way in Minnesota in terms of new, innovative equipment. The company has often been the first in the state to purchase new technology: the first CAT D8H dozer with a hydraulic ripper in 1959; the first CAT 966C articulated loader in 1963; and the first Numa down-the-hole hammer in 2002. In 2005, the company purchased its first demolition robot, a Brokk 330, and then added a Brokk 180 in 2007.

The company’s foray into remote-controlled demolition began because of a project in downtown Minneapolis: a large interior demolition job that required the purchase of a Brokk to remove floor slabs. The structure’s limited space restricted larger equipment but was more than spacious enough for the 2-ton Brokk 180 and its high power-to-weight ratio. The Veit team was able to complete the project 25% faster than they would have with hand tools alone. The versatile machines opened the door to additional demolition projects, including the kind of top-down demolition required to safely take down two of Black Dog’s smokestacks. 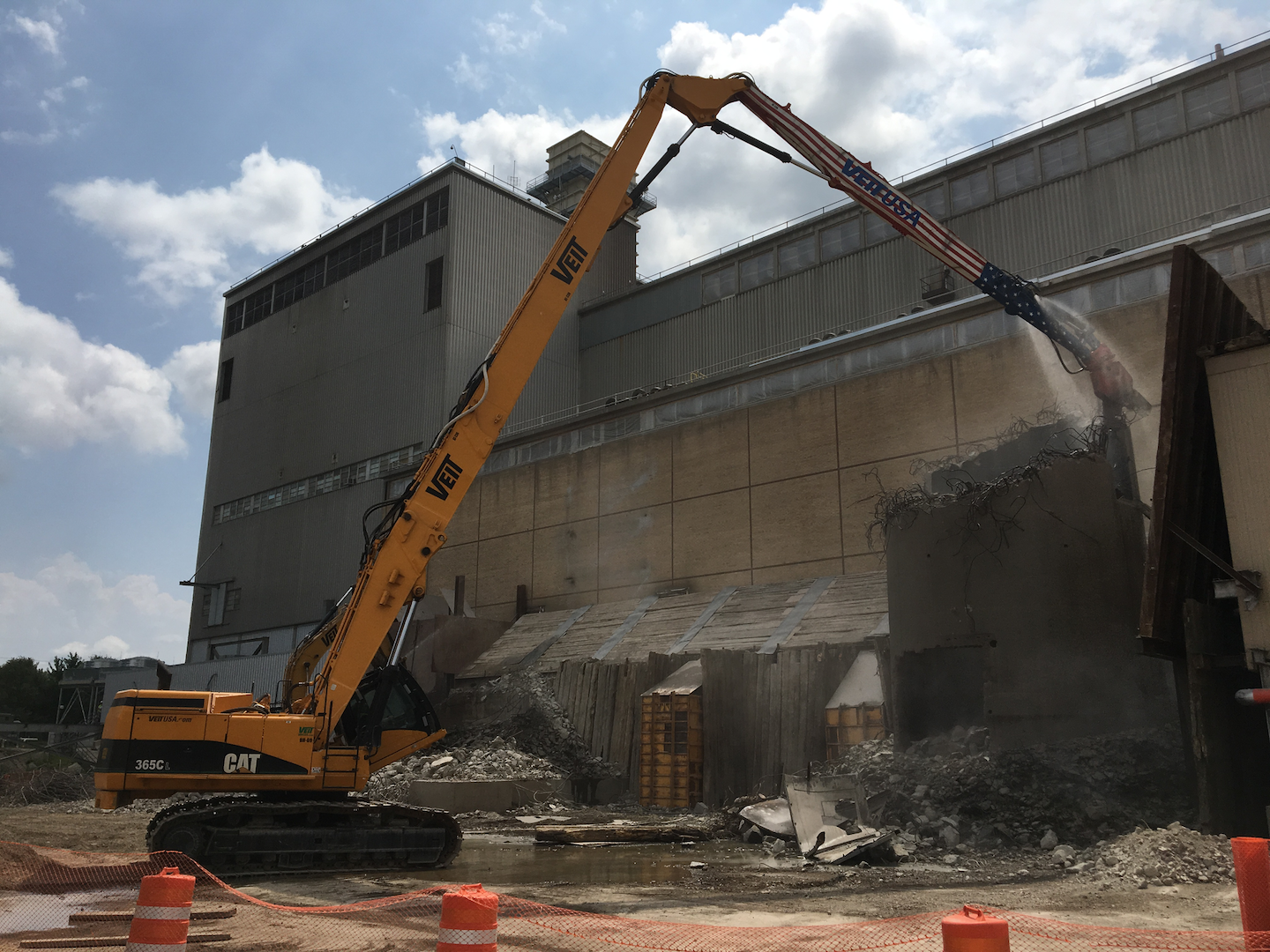 Veit utilized the Brokk 500 to take two of the structures down to 120 feet, bringing them within reach of a CAT 365 Ultra-High-Reach excavator that demolished the remaining portions of the smokestacks.Brokk Inc. “Our method of demolition with the Brokk remote-controlled machines is what’s gotten us these jobs,” said Ryan Olson, Veit general superintendent of demolition. “Without them, it would be an incredibly labor-intensive process, not to mention that it would put workers at risk for potential injuries.”

The right tools for the job

In the case of the Black Dog power plant, Veit’s approach began with a focus on protecting the structures around the smokestacks. Portions of the power plant facility are as close as 30 feet to the stacks, and without protection could easily be damaged by falling debris.

Olson’s team began by fabricating an enclosure over the existing pipe rack on the 300-foot smokestacks, extending the I-beam structure to support the timber protection. Then they moved in the equipment, including a 450-ton Manitowoc 2250 crane outfitted with a custom box for lifting and carrying the demolition robot.

While Veit’s Brokk 330 machines were tried, tested and proven, the contractor chose to do a rent-to-purchase option on a new Brokk 500. The machine features a reinforced design and a vertical reach of 24.3 feet as well as an impressive power-to-weight ratio.

“The Brokk 330 gave us a huge productivity jump over hand labor but upgrading to the larger Brokk 500 was a complete game changer,” Olson said. “We’re getting 30% more productivity from the 500 than from our Brokk 330.”

That productivity doesn’t just come from the larger machine size, but also the type of attachment. Breakers come standard on Brokk machines, but Veit upgraded to a pulverizer attachment a couple of years ago. The Darda 700 concrete pulverizer delivers 600 tons of crushing capacity and has wear-resistant steel alloy crusher tips and cutter blades. It is ideally suited for top-down demolition, making it a perfect fit for this project.

“The pulverizer increases productivity over a hydraulic hammer,” Olson said. “It has been a great addition and has saved us a lot of time on projects.”

Demolition from the top down

Smokestack demolition is no easy task. It requires determination, organization and extreme attention to detail.

Traditional smokestack demolition involves numerous tools and six to eight crew members who are willing to take the risk of working at dangerous heights. In a traditional manual demolition, crew members would install ring scaffolding around the smokestack, and work in 5- or 6-foot increments to hand-remove the material from the top down. Each of the two smaller, 300-foot-tall, 78-foot-circumference smokestacks had a wall thickness of 4 inches at the top and 17 inches at the bottom. The thick concrete requires more man power to demolish with handheld tools. Besides safety, there are other factors that make a remote-controlled demolition machine a much more attractive option for projects like this: lack of experienced laborers in the current workforce, the difficulty of extreme hard labor with heavy hand tools, and weather limitations such as hot, cold or windy conditions.

Opting for remote-controlled demolition allowed crews to stay out of harm’s way, while getting the work done 25% faster than they would have with handheld tools. Plus, Veit only needed a 1/3 of the workers that would typically be used on a demolition project like this. 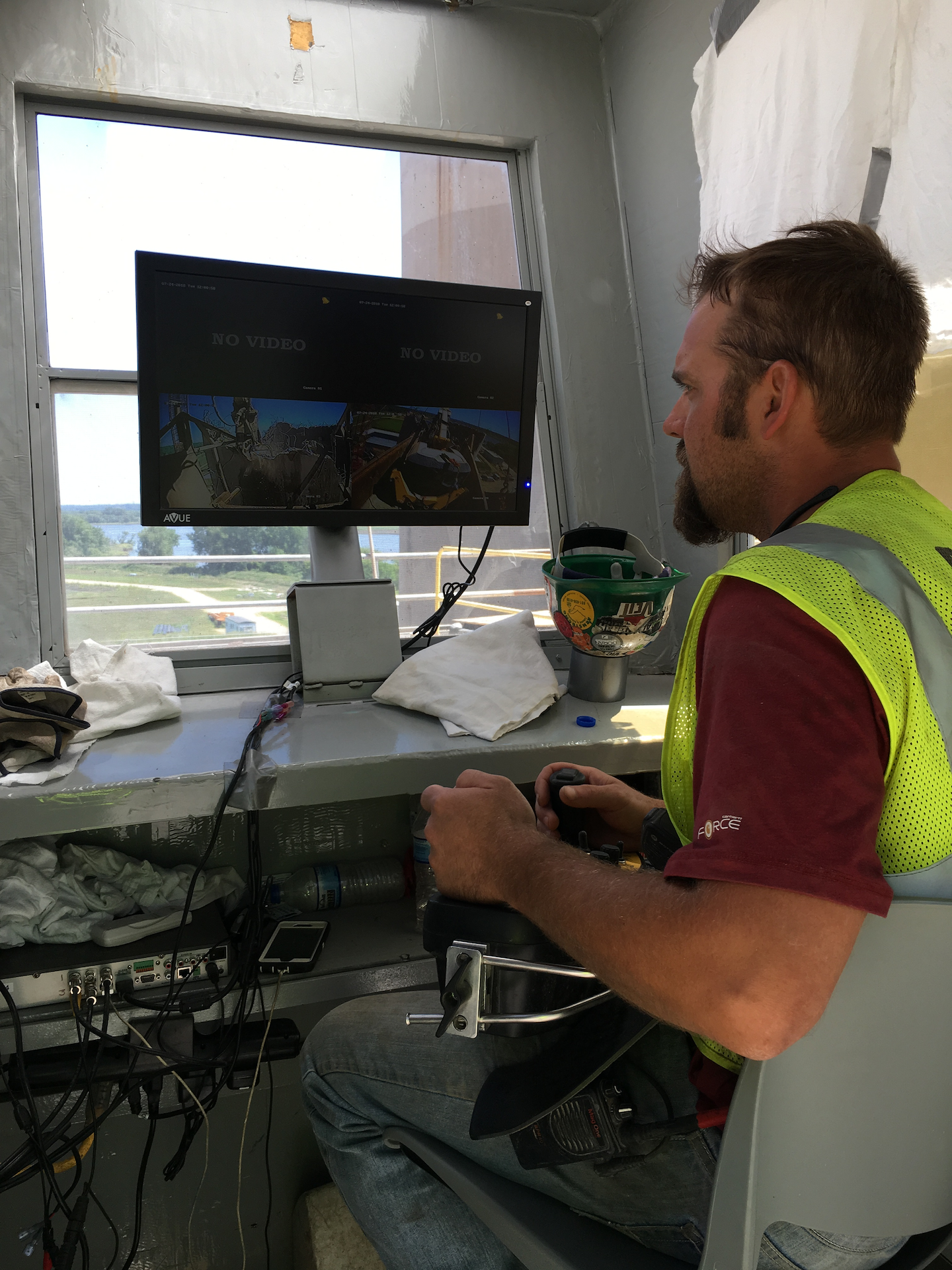 Opting for remote-controlled demolition allowed for crews to stay out of harm’s way, while getting the work done 25% faster than they would have with handheld tools.Brokk Inc.During the demolition, the operator directed the Brokk 500 from a control room, using screens displaying the view from the machine’s three cameras to safely monitor the situation while breaking away at the two 300-foot smokestacks. Crane operators, Brokk operators and ground crew all had radio communication throughout to minimize the risk of errors.

Veit took the two structures down to 120 feet, bringing them within reach of a CAT 365 Ultra-High-Reach excavator that demolished the remaining portions of the smokestacks down to 40 feet. From that point, a CAT 336 excavator equipped with a Genesis LXP 200 Concrete Cracker completed the rest of the demolition.

Crews then started cleanup and maintenance. Veit used excavators to reach inside the smokestack and remove built-up material, such as concrete, rebar and brick. The contractor collected and transported more than 13,000 tons of debris, recycling 100% of the materials. The steel was sent to be melted down to make new products, and the concrete was hauled away to be crushed for use as base material for roads and parking lots.

Looking to the future

The entire renovation process is expected to be complete in 2019, when Veit will tackle the last — and largest — smokestack. The third structure, called the common stack, is 600-feet-tall and had a base circumference of 180 feet. The smokestack will be demolished with handheld tools down to a height of 120 feet, and then will be fully removed with the CAT 365 High-Reach. The contractor won’t use the Brokk 500 for the structure because of costs associated with requiring a much larger crane.

Once all outdated structures are removed, the plant will be fully converted to a natural gas energy provider. In 2014, the last year of coal burning, Black Dog was Minnesota’s fourth-largest carbon polluter among power plants. Once the conversion to natural gas is complete, it will have a total summer production of 496 megawatts from three gas units and 530 megawatts of capacity in the winter.

While it may be more difficult to spot Burnsville on an arrival flight to Minneapolis-St. Paul International Airport, Black Dog power plant is still on the scene in the city, providing energy to tens of thousands of residents.

Cat® Wheel Loaders are purpose-built and technology-equipped for your work. FIND YOUR LOADER
June 11, 2020
Latest

The flange facing machines have gotten bigger and better providing the versatility expected from a Mirage product.
Enerpac
July 6, 2020
Follow Us