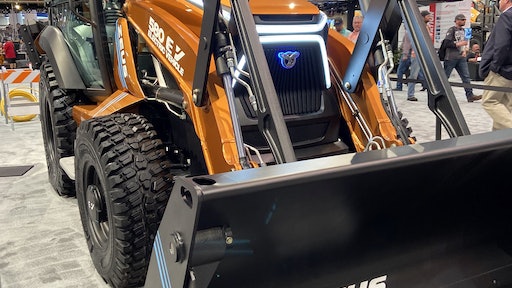 The 580 EV backhoe-loader operates with zero emissions, lowering the total carbon footprint for its owners.

Clearly, Case Construction Equipment has been very busy since CONEXPO-CON/AGG 2017. At that time, its big "tease" was a concept dozer/loader combination. But at this year's show, it proved it wasn't messing around with a simple concept. The company has clearly been very busy since the last big event.

Launched at World of Concrete and showcased at CONEXPO was the B Series next-generation compact track loaders and skid steers. The series includes five CTLs and eight skid steers offering radial and vertical lift configurations, numerous horsepower and size ranges and a choice of standard mechanical, mechanical hand-and-foot and electrohydraulic controls. 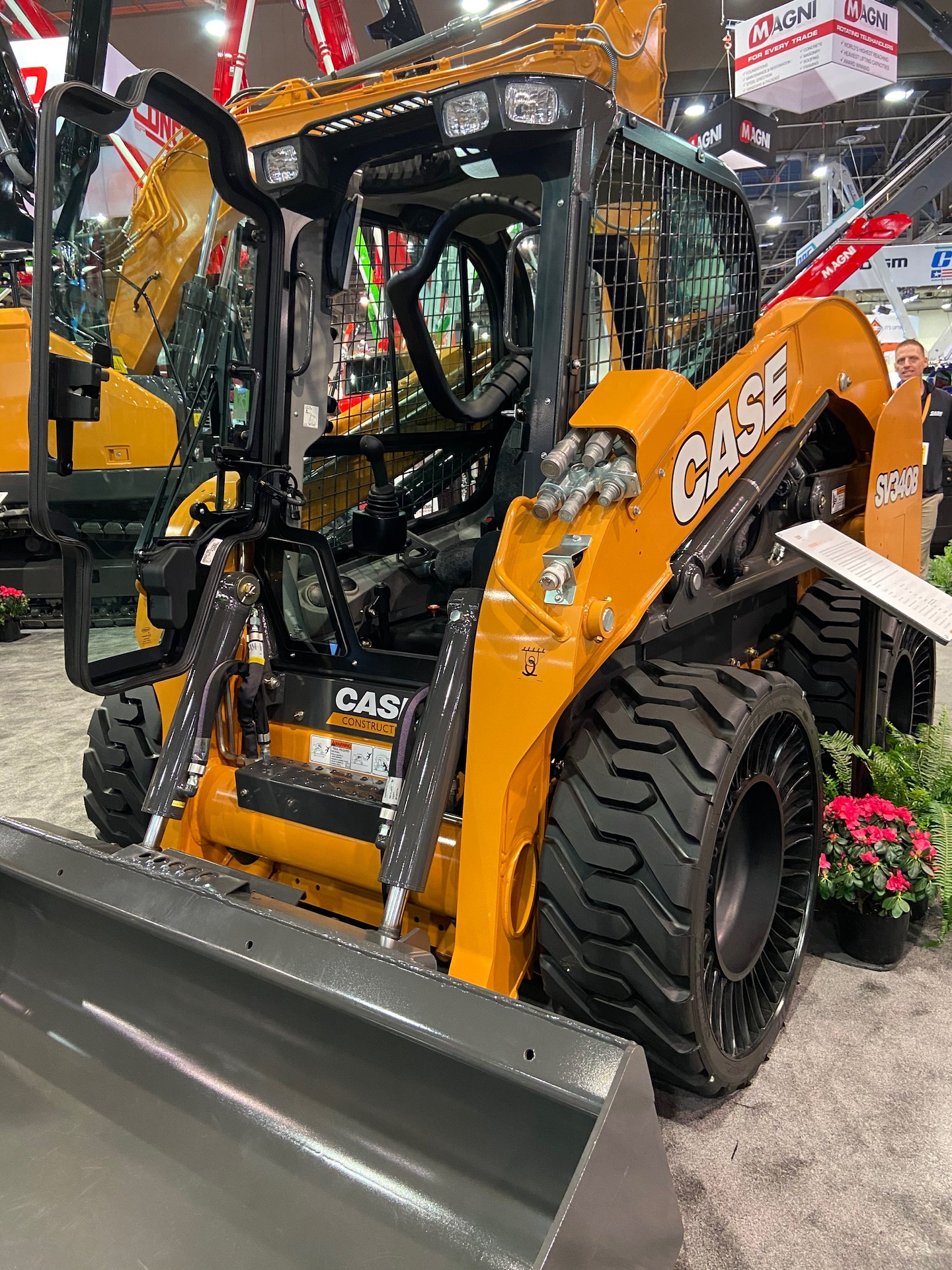 Case B Series skid steer“The B Series retains the styling of previous Case loaders, yet critical operational systems have been re-engineered for greater performance, and fully integrated with new control and operator interfaces to give contractors a powerful match of productivity, efficiency and convenience,” says George MacIntyre, product manager for compact equipment at Case. “The completely redesigned B Series operator interface includes new left- and right-hand posts with simple ignition, push-button operation, easy throttle control and intuitive switches for all core machine functions.”

Given the highly positive response to the Project Minotaur dozer/loader prototype shown at the previous CONEXPO, Case announced early last year that it was in the process of taking this new machine concept to the next level. After months of testing and customer feedback, along with some design tweaks, the DL550B has emerged as the industry’s first fully integrated compact dozer loader.

“Our goal with this ‘concept’ was to see it through all the way,” MacIntyre states. “The DL550B is here today as the result of the passion and drive of our engineering, product validation and manufacturing personnel, the real-world operators who spent hundreds of hours running prototypes around the country, as well as the enthusiasm shown by the construction industry in providing feedback to how this machine should perform in the field.” 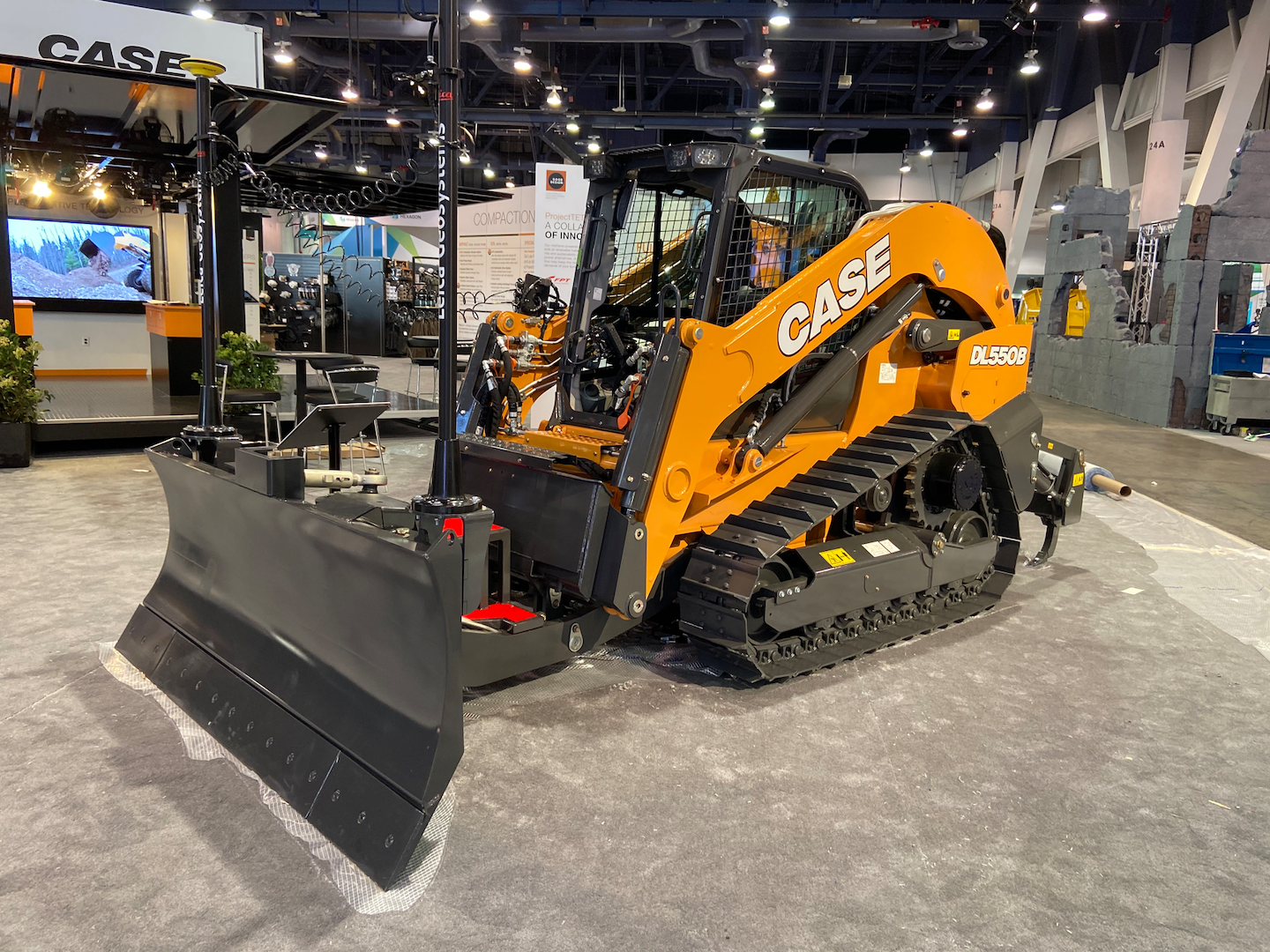 The DL550B is the industry’s first fully integrated compact dozer loader.The DL550B comes with a true dozer-style undercarriage available in steel or rubber track configurations. Case Universal Machine Control will allow it to be outfitted from the dealer with any of the three major suppliers of grade/machine control technologies. The unit will also be compatible with SiteControl CoPilot, which provides a mastless machine control experience with basic control of slope/grade.

Major changes to the DL550B vs. the original concept include a shift from radial to a vertical lift geometry and an increase in rated operating capacity from 4,500 up to 5,500 lbs. (50% tipping load).

“We found that the vertical lift pattern helped us achieve both the dozing performance we were looking for while also expanding its ability to serve as a high-capacity CTL,” says MacIntyre. “The vertical lift pattern allows us to reach deeper into trucks, and additional enhancements in machine structure and performance allowed us to increase the rated operating capacity by 1,000 lbs., making the DL550B one of the most powerful and versatile machines ever built within this footprint.”

The roughly 18,000-lb. machine operates at 114 hp and offers auxiliary hydraulic options of up to 40 gpm at 4,100 psi. It is available with an optional fully integrated ripper and is compatible with a wide range of heavy-duty attachments.

Arguably stealing the show at CONEXPO was the unveiling of Project Zeus, an industry-first fully electric backhoe-loader. Designated the 580 EV (Electric Vehicle), it is powered by a 480-volt, 90-kW-hour lithium ion battery pack that can be charged by any 220-volt/three-phase connection. While applications will vary, each charge will support most common eight-hour workdays.

“The 580 EV is a significant step forward in our commitment to sustainability, the evolution of earthmoving equipment and truly practical innovation that drives real savings and competitive advantages for backhoe owners,” asserts Leandro Lecheta, head of construction equipment - North America, CNH Industrial. 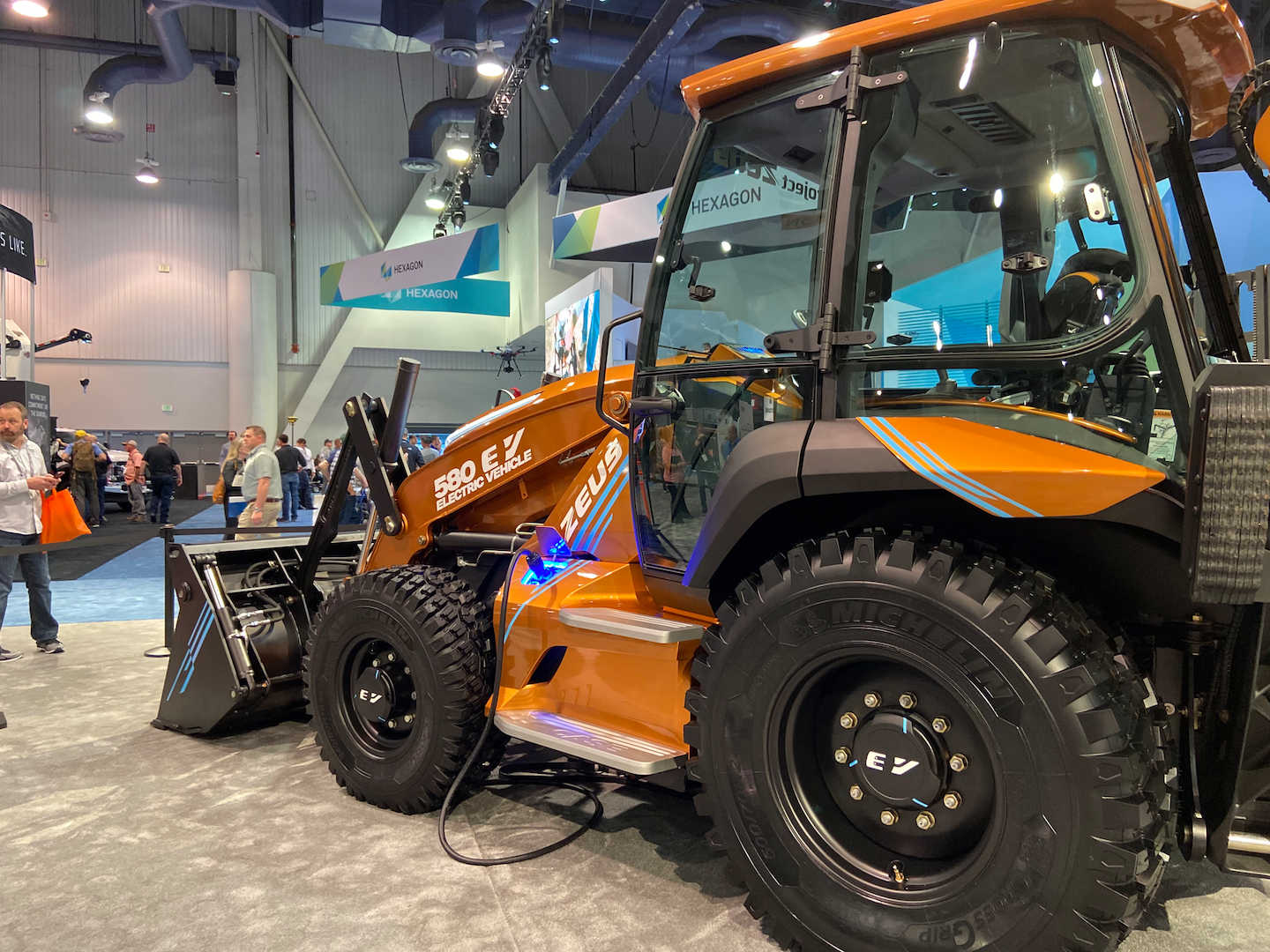 The 580 EV is powered by a 480-volt, 90-kW-hour lithium ion battery pack that can be charged by any 220-volt/three-phase connection.While perhaps not an immediately obvious choice for battery power, Eric Zieser, director - global compact equipment product line, Case, argues otherwise. “The backhoe-loader is perfectly suited for electrification as the varied use cycles, from heavy to light work, provide an excellent opportunity to convert wasted diesel engine hours into zero consumption battery time, yet provide the operator with instantaneous torque response when needed.”

He notes that a diesel engine at low idle has reduced torque and requires time for the engine to ramp up to meet the load demands. “Electric motors, on the other hand, have instantaneous torque and peak torque available at every operating speed,” he adds.

The 580 EV operates with zero emissions, lowering the total carbon footprint for its owners. Economic benefits can include as much as 90% lower annual service and maintenance costs, substantial fuel savings and the ability to bid certain jobs and obtain incentives otherwise unattainable.

Case sees the 580 EV as particularly well suited for utilities, utility contractors and government and public works operations, all of which tend to have initiatives aimed at lowering emissions, reducing noise in public areas and finding new ways to work within tight budgets.

To that end, the company announced that two models have already been sold to U.S. utilities. Case indicated it has the capability to produce more units throughout 2020 before ramping up production to meet greater demand in following years.

The 580 EV is actually the second major alternative-powered machine Case has introduced in the past 12 months. At bauma 2019, Case made a big splash when it pulled the curtain off of Project TETRA, its methane-powered concept wheel loader. This futuristic-looking machine made its debut in North America at CONEXPO. 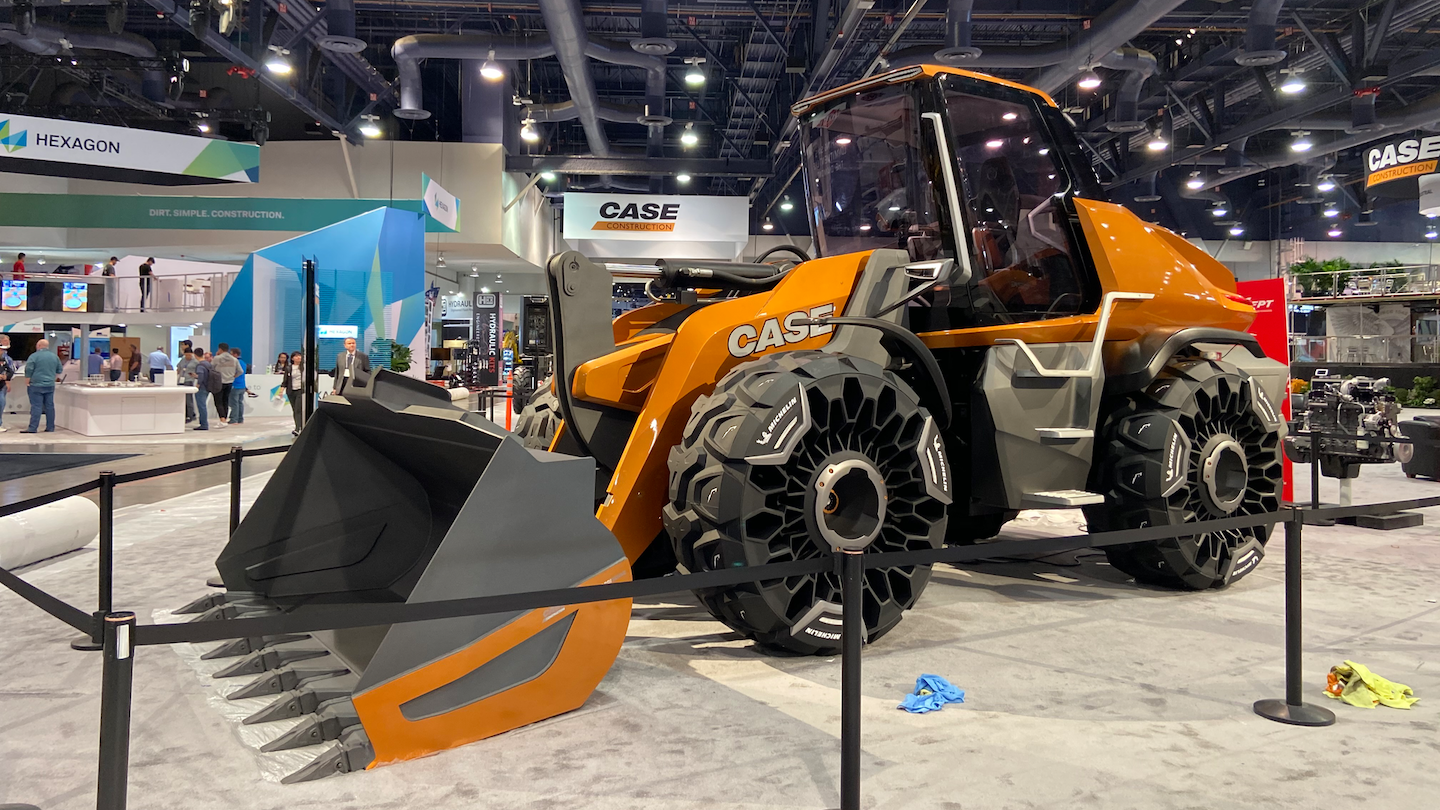 Project TETRA is a futuristic-looking methane-powered concept wheel loade that made its debut in North America at CONEXPO.Project Tetra benefits from the existing research and development program of sister brand New Holland Agriculture in off-road methane usage, with over seven years of experience and an extensive global testing program . t uses an FPT Industrial six-cylinder methane engine that delivers max power of 230 hp — the same as the equivalent diesel engine — and torque up to 1,184 Nm. The engine runs on compressed natural gas (CNG), ensuring 15% less CO2 and 99% less particulate matter than its diesel-based counterpart.

The unit also features a 50% reduction in drive-by noise levels, making it especially suited for municipal applications and for working in noise-sensitive urban and residential areas.