It took about 20,000 man hours for a team of more than a dozen Brandenburg employees to deconstruct a drill rig and its support system in Prudhoe Bay, AK. 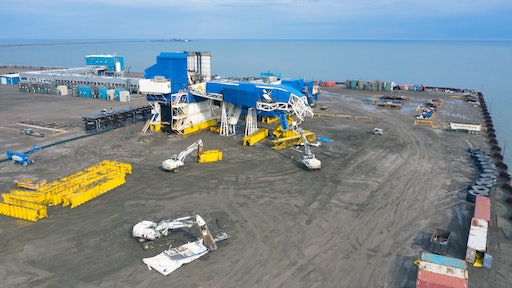 SDI Island in Prudhoe Bay, AK, is located about 600 air miles north of Anchorage, about 1,200 miles south of the North Pole and about 250 miles north of the Arctic Circle. It took about 20,000 man hours to deconstruct a drill rig and its support system there. More than a dozen Brandenburg employees lived in camp-like conditions, adjusting to 20 hours of daily sunlight and building camaraderie over two summer seasons to complete the project for long-term client, BP Exploration Alaska. Headquartered in Anchorage, the BP subsidiary operates Prudhoe Bay Field.

BP’s original plan was to develop the Liberty oil field, which required installation of a special rig for ultra-extended-reach drilling. The rig was constructed in 2010. Over time, plans changed and the equipment proved redundant. In 2018, Brandenburg was brought in to dismantle and remove the land-based rig, including power modules, the drill support module and a pipe barn. The scope of work included structural demolition, fluid removal and environmental remediation.

The greatest challenge for the project team was the management of logistics required in such a remote location. For example, it took six months to plan the project, develop engineering drawings and coordinate project details. Three Liebherr 954 excavators, a Komatsu WA 500-wheel loader, a Bobcat and equipment for an oxygen trailer were shipped from Chicago to the jobsite, 4,500 miles away. Shipping alone required extensive planning and a five-week delivery scheme. To add to the delivery challenge, the only road into the Liberty oil field broke up in the spring of 2018, completely closing the only access source and delaying the planned start date.

Beyond location issues, work was confined to the summer months, cutting the 21-month completion schedule to just eight months over a two-summer time frame.

Phase 1, completed in the summer of 2018, involved the removal of universal wastes, 4,500 gallons of fluids and equipment salvage — all self-performed by the Brandenburg team. Subcontractors assisted in the fluids removal from the site. Phase 2, occurring in the summer of 2019, required the demolition of all structures and the removal of materials to off-site locations. Demolition took place amidst operating wells and adjacent to active oil and gas production facilities.

Setup work for the demolition required two high burners inside the pipe barn working from man lifts, followed by the use of a Liebherr 954 excavator, with shear and brick pick, to bring the structure down to the ground. After removing the pipe barn structure, the Brandenburg team built a drop berm to support the removal of a 240-foot-tall mast assist and mast.

Throughout the effort, the team remained on high alert to assure no harm to the island on which the demolition took place. Spill and leak prevention was an equal priority, considering the proximity to water and the ecological balance of the manmade island. Not only were all environmental considerations successfully addressed, but the difficult and potentially dangerous project was completed without one safety incident.

Dennis McGarel is the vice president of sales and estimating at Brandenburg Industrial Service Company. 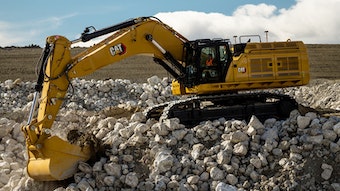