Evaluate the features, then size to the task at hand. 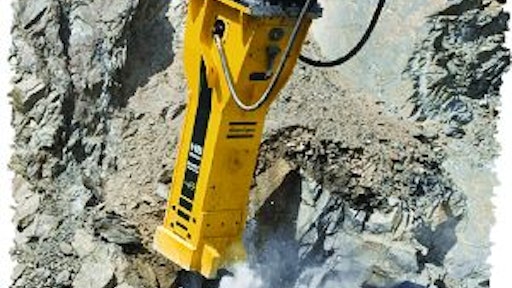 Dust suppression technology can prevent dust and debris from working its way into bushings and tool areas, prolonging the life of these components.

The basics behind most hydraulic breakers haven't changed all that dramatically in recent years. "All in all, a hammer is designed to break," says Shane Meisel, product manager for mounted impacts, Stanley Hydraulics. "The goal is to maximize the efficiency of the hammer, in terms of getting as much impact energy as you can into the tool to get the most energy into what you're trying to break. It's about the laws of physics and transferring energy. Most breakers have gotten to the point where they're about as efficient as they're going to be."

Consequently, advances in design are more about fine-tuning breakers and incorporating features to minimize the effects of operation on the operator, carrier and attachment. Automatic power adjustment, automatic lubrication and noise suppression are some more notable features found on today's models.

Additional changes relate to the growing use of hammers on smaller carriers such as compact excavators and skid-steer loaders.

"The compact carrier segment has significantly changed the hammer attachment market," says Greg Smith, Allied Construction Products, LLC. "Everything from demolition to highway bridge widening is increasing, and this work requires more compact carriers with hydraulic breaker attachments. The introduction of additional models, different sizes and more powerful compact carriers has meant that the hammer manufacturers must develop more hammer models. It is not a 'one size fits all' type of business."

Keeping it quiet
Noise levels are a growing concern for the construction industry. Some communities have actually implemented policies restricting the amount of noise permitted during certain hours of operation.

One such community is Aspen, CO. Its city council declared noise to be a significant source of environmental pollution that represents "a present and increasing threat to the public peace and to the health, safety and welfare of its residents and visitors." Consequently, it developed a policy of permissible noise levels for various areas and times. For example, the maximum permissible noise level in a commercial district is 60 dBA from 9:00 p.m. to 7:00 a.m.

San Diego, CA, has taken a broader approach. Between the hours of 7 p.m. and 7 a.m., it's unlawful to alter or repair any building or structure that creates "disturbing, excessive or offensive noise" unless a permit has been granted. Repeat noise offenders can be fined up to $2,500.

Due to such limitations, many of today's breakers ? including Allied's S-, E- and G-Series models ? incorporate sound suppression material, which reduces the noise produced by the piston as it strikes the tool inside the hammer box, Smith points out. "This allows contractors to work in areas where noise is a problem, such as near urban areas, schools, hospitals, places of worship and homes for the aging," he says.

Vibro Silenced Plus breakers are completely enclosed and sealed inside a steel box with polyurethane pads and dampeners, says Rich Elliott, hydraulic applications manager, Atlas Copco Construction Tools, LLC. "This reduces the amount of noise created by the breaker because it acts like a muffler," he explains. "That enables the breaker to be used in areas that are sensitive to noise pollution."

Reducing noise has the added benefit of reducing the vibrations that are passed on to the carrier and operator. This adds up to increased operator comfort and machine life.

Extending component life
A hydraulic hammer creates dust as it breaks up concrete and rocks. This byproduct can wreak havoc on the attachment if it works its way into the bushings and tool areas. Fortunately, technology is now available to minimize the risk of dust ingress into these areas.

"Dust is certainly something you can control so it doesn't damage the machine," says Meisel. "You want to keep the breaker up and working so that you're able to complete the job quicker. The easier and faster you can get the initial breaking job done, the more you're helping your customer."

Many current breakers feature dust suppression technology that keeps out dust, debris and other foreign objects. "This will prolong the life of the bushing and reduce the amount of chisel paste needed to keep it lubricated," notes Elliott.

Of course, adequate lubrication is still critical to enhancing the life of the attachment, since it reduces wear and can help prevent debris from working its way up through the hammer. Consequently, automatic lubrication systems are becoming much more prevalent as a means to save time over manual greasing.

Devices such as the ContiLube II system on Atlas Copco breakers automatically grease the tool and bushing during operation. "This [in turn] increases production because the operator does not have to stop and grease the tool and bushing on the intervals of at least every two hours," says Elliott. "It is fully adjustable to ensure that the proper amount of chisel paste is being consumed for each application."

Automatic adjustments
Another feature found in many breakers is automatic power adjustment, referred to by some manufacturers as material-sensing technology, automatic variable flow, etc. The concept behind the technology focuses on increasing or decreasing the cycle of the piston based on the resistance of the intended target.

For example, if you're breaking a soft material, you may not need the full impact of the tool. "The attachment automatically changes the speed and impact energy [based on] how much energy is needed to break the material," says Elliott. This improves production, since you're not wasting impact energy on material that doesn't need the full energy the breaker can produce.

Even with the availability of automatic adjustment, Meisel stresses the importance of matching the breaker to the job and the carrier. "We work with customers to get the right size of breaker because that will give them the best efficiency," he states.

"Understand what features are on the machine and if the features of a particular breaker will increase your production and decrease your maintenance costs," adds Elliott.

Size to material and conditions
When sizing a hammer, pay attention to the applications and types of materials the hammer will encounter.

"Usually, you can mount three or four different size breakers on a carrier," Elliott notes. "If you have a 30-metric ton carrier and you're going to be breaking up a bridge deck, you may not need the biggest breaker the carrier can handle. You may be able to use a smaller size breaker to do the job or task. On the other hand, if you're using a 30-metric ton carrier for trench work in an area with extremely hard rock, then it may be necessary to get a larger sized carrier and breaker to complete the job in the time frame required."

Compact carriers with smaller breakers are typically preferred for work performed overhead or horizontally, because there is less force needed from those direct angles. However, if you're working over an embankment, you will likely need a larger breaker.

A larger model is also typically required if you're working in a trench to break apart rock. "There is dirt and other objects around what you're trying to break. They hold the energy in," Meisel explains. "If you hit a rock on top of the ground, it will split wide open. But if that same rock is surrounded by mud, it will take a lot more energy to break it because... the ground surrounding that rock is absorbing the impact energy."

Take into account the material type and condition, as well. Are you working in soft, medium or hard rock? Does the material contain cracks and crevasses, or is it solid? What is the average thickness of the material?

"Small breakers are not efficient for thick concrete, and large breakers might be 'overkill' for softer rock," Smith points out. "Also consider if the concrete has reinforcing steel in it. The thicker the concrete and more steel reinforcement, the bigger the hydraulic breaker will have to be to break it productively."

"You need to know what you're using the hammer for," agrees Meisel. "That way you won't be overpaying for a breaker that is larger than you need, nor will you have to pay to make repairs on a breaker that is too small."

"The hammer will not hit properly, nor will it hit hard and fast enough to break the desired material," he continues. "If there is too much oil flow and pressure, then it will damage the hammer."

Keep in mind the tool diameter and weight of the hammer, as well. "A higher piston weight equates to a larger tool," Smith points out. "That will produce a higher constant blow energy."

"Like every aspect of the hammer, you want to find the median between the largest hammer size for both your carrier and application," Smith comments. "Most manufacturers publish recommended carrier weight ranges for their attachments, so be sure to check the specification."