Dig, Lift and Place With One Machine

Attachments turn your excavator into a trenching tool. 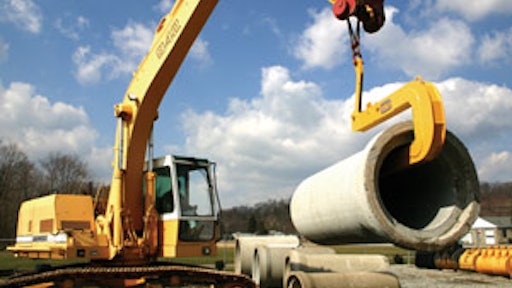 Pipe lifting attachments can provide a safer, less time-consuming alternative for lifting and placing pipe into a trench.

A wide range of available attachments give excavators the versatility to accomplish virtually any task associated with a trenching application, including digging, lifting, placing and more. Following is a look at some of the different tools available to turn your excavators into multipurpose trenching machines. Additional attachments for trenching and other applications can be found starting on page 22.

More than just a bucket
An essential trench digging accessory, buckets are available in a number of different types to help you get the job done most efficiently and productively. General-purpose, heavy-duty and severe-service buckets are manufactured in various materials/abrasion resistance and widths/capacities to accommodate the soil conditions and trench sizing needs. Bucket teeth and other ground-engaging tools come in a variety of styles and spacings to further enhance the selection process.

Many manufacturers offer specialized buckets for trenching operations. For example, trapezoidal buckets can carve slopes as they dig, making them a suitable choice for irrigation ditches, canals and waterways, as well as trenches. Wide and shallow ditch cleaning buckets can remove sediment quickly, and often have drainage holes to allow water to drain through.

"This type of bucket gives you the ability to sort for a particular size of material, such as what might be needed to fill a trench," says Bo Pratt, sales manager, Rockland Mfg. "Or if you're selling rock, you can easily separate the rock into piles based on the size required."

Rockland recently introduced a rather unique bucket system to the U.S. market. The EZ Dig attachment is a series of bolt-on, anti-abrasive buckets (for typical soil conditions), blades (for sticky materials such as clay) or ripper teeth (for severe soil conditions) positioned sequentially behind one another. It can be used to dig trenches as narrow as 4 in. or as wide as 20 in. Because blade width can be easily changed by simply unpinning one size and pinning on another, you don't need to invest in a lot of different sizes of buckets to accommodate varying trench widths.

The EZ Dig can be mounted on compact excavators up to 21,000 lbs. Depending on the machine size and the breakout force required, you can mount anywhere from one to three buckets or blades.

"Because of its design, the EZ Dig allows contractors to dig quickly, even in sticky clay, and the buckets empty easily. The EZ Dig eliminates having to repeatedly shake the bucket or forcefully remove the packed-in clay before discharging the load," notes Pratt. "The EZ Dig can also dig up to 35% faster because it takes more dirt per bite. It [can be] especially beneficial if you are required to dig a very narrow trench. The closer you can dig to the spec width of the trench, the better. You won't have as much to backfill and you will not waste time moving material you didn't need to move in the first place."

Easier pipe placement
Bucket thumbs can simplify material handling in trenching operations. "Thumbs are a great attachment if you have to lower something into or grab something out of a trench," says Ron Peters, product manager, CEAttachments. "Using the bucket and the thumb, you can pick up rocks or whatever you need to get out of the way."

Manufacturers offer a variety of choices, including rigid and hydraulic thumbs that can improve pipe handling, and eliminate the need for extra workers on the ground for hooking/unhooking chains and straps.

Another alternative is to use specialized attachments for pipe-handling operations. For example, Kenco Corp. offers three types of attachments specifically designed to handle virtually any type or size of pipe.

The Pipe Hook is a long tine that inserts inside concrete pipe; elastomer pads prevent the pipe from slipping off as it is moved and placed. This attachment is useful for handling pipe as small as 10-in. inside diameter or up to 60,000 lbs. in 8-ft. joints or smaller. A self-leveling model with a balancing mechanism inside the hook body is available.

The Pipe Lift uses gravity and a scissor action to clamp its tongs onto PVC, iron or concrete pipe. The heavier the pipe, the tighter and stronger the grip. "It's quick and automatic," says Tracy Black, operations manager, Kenco Corp. "And you don't have to be directly in the center of the pipe to lift it. You can set the Pipe Lifter down onto the pipe, lift up and it automatically grabs it."

The SuperLift is a variation of the Pipe Lift, but with bolt-on tines of different sizes for other lifting operations. In addition to pipe, it can move concrete walls, blocks, logs, drums, debris, etc.

Using such lifting attachments is safer and more efficient than more traditional pipe-handling tactics such as nylon straps or chains, Black states. "If you're using a 2-in. nylon strap, you have to somehow get that strap underneath the pipe to wrap it around," he explains. This can be a time-consuming and sometimes dangerous process.

Precision can also be an issue. "With something as narrow as 2 in., you have to be exactly in the center of the pipe to pick it up level. If you're off even a few inches, it will tip down on one end. Then you will have to set the pipe back down and someone will have to physically move the strap," says Black. "When you get the pipe in the trench, you have to pull the strap out from under the pipe. That can cause the pipe to twist, which can disengage the pipe connection.... Now you have to reconnect it. With straps or cable, you have three to four extra steps."

According to Black, an attachment such as the Pipe Lift can reduce both the time and personnel required for this task. "You can just set the lift down near the middle of the pipe and start to lift," he says. "If you're too far off center, you can lower the pipe to the ground, release the pressure a bit, slide the attachment over and pick it up again, all from the operator's seat in the cab. When you get the pipe in the trench, you can also use the attachment to push it together. And since the lifter grabs the sides of the pipe... you don't have problems with removing a strap that is buried in bedding. The lifter simply collapses, locks open and lifts off the pipe."

The result is less time and less cost for pipe placement. "These attachments are safe and can expedite installation of pipe by shaving as much as 30% to 50% off the time it takes to complete a job, depending on the job," Black asserts. "And time is money. If you can get a job done before you had hoped, then you win."

Pay attention to couplers
With the variety of attachments available, quick couplers can be a boon to efficiency. "The big advantage is you can switch between different attachments quickly," says Peters.

However, pay attention to which coupler you're using, since it can change the geometry of the machine. Tip radius is important because its measurement affects the curling force. For example, a bucket with a short tip radius provides more bucket curling force than one with a longer tip radius, which makes it easier to load.

A dedicated coupler that is an integral part of the machine minimizes the effect of using a coupler, maintaining the highest possible machine power. A hydraulic pin grabber coupler could move the bucket further away from the stick, adding to the tip radius. This could reduce the breakout force of the machine, depending on the bucket and machine configuration.

Your attachment manufacturer can help calculate the affect that a particular coupler may have on breakout force, enabling you to determine which coupler provides the optimum versatility without sacrificing too much power from the carrier.

Convert Excavators Into True Trenchers
For extremely narrow trenching applications, Paladin Light actually offers a trencher attachment that can be adapted to mount onto compact excavators. Such an attachment has traditionally been found only on skid steers, compact track loaders and compact utility loaders.

Both a traditional and an offset model are available. "The offset model is unique in its capabilities because it can trench close to footings," says Melani Moorman, Paladin Light. "It can dig up to 36 in. deep and has two motor options for accommodating hydraulic flows up to 16 gpm at 3,000 psi."