Improvements in materials and components led the way to greater effectiveness, efficiency, and job quality. 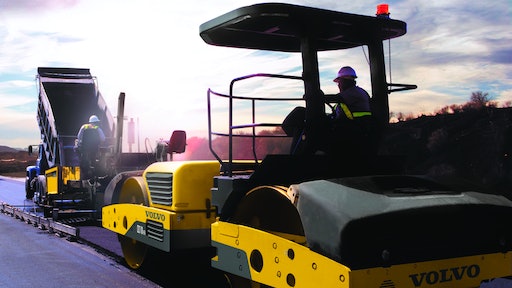 Many developments in compaction equipment have been the result of developments in other fields - materials or electronics, for example - that have enabled manufacturers of rollers and plates to make great strides in improving the compaction operation for contractors.

Frank Wenzel, vice president of engineering for Stone Construction Equipment, says efforts to improve the productivity and reduce the cost of compaction equipment are ongoing, with the main focus being to help contractors do a more effective job. Innovations are usually tested and fine-tuned on larger highway rollers, but as innovations are perfected and accepted on the larger machines it doesn't take long for them to make their way to the parking lot and driveway contractor.

Wenzel says a good example is vibration, noting there has been a shift from static to vibratory rollers among commercial pavers. "Although vibratory rollers have been around for some time it took a while for their popularity to trickle down to the smaller roller market," Wenzel says.

"All technology, with the exception of intelligent compaction, has trickled down to the smaller rollers," says John Hood, Bomag Americas. "Today's rollers provide much smoother operation, the electronics controls and hydraulics system are much improved, and ergonomics are just as important on a small roller as on a big one. As technology moves forward it's being integrated on equipment industry-wide."

Some of the most important developments are in the materials and components that make up compaction equipment because those developments have led manufacturers to a host of innovations that have benefitted contractors.

Electronics & hydraulics. Dave Schulenberg, Wacker Neuson product manager, says developments in the quality, durability, and performance of hydraulic motors and pumps and the rapid development and acceptance of electronics have played a significant role in moving the compaction industry forward.

"The combination of electric and hydraulic components can simplify operation and improve performance in a smaller package," Schulenberg says. "Improved hydraulic efficiency means less fuel is required to do the job, and it means the job can be done faster."

He says new electronics are more sophisticated, more durable, and require less maintenance. "When you bought an engine 25 years ago it had points that you had to adjust. Today that's all solid state electronics."

Bob Marcum, Volvo product specialist for road machinery, says improved electronics have enabled manufacturers to better manage water usage in its rollers. "Operators can manage the water system so we're not pumping at maximum flow the whole time the system is on," he says. "That way we can make the water last longer, increasing productivity."

Schulenberg says advances in electronics have also enabled manufacturers to offer a pressurized water system with multiple spray settings. "The operator can adjust the water flow to keep the asphalt from sticking to the roller and so there's not so much water consumed that he runs out and has to stop to refill."

And improvements in safety are also a result. He says an "operator presence" system that recognizes when the operator isn't sitting in the seat would not be possible without electronics advances. "If the operator is off the seat the system will immobilize the roller," he says.

Wenzel says the increase of vibration frequencies and centrifugal force selections on plate compactors has made them an essential tool for contractors.

"Vibration isolation is a big thing," Wenzel says, adding that with increased forces and frequency variations comes the need for vibration dampening. "Dampening handles isolate the operator from the energy of the machine.," he says. "Contractors know the difference between units with and without improved vibration isolation, but not all contractors insist on these improvements. There's always a segment of the market looking strictly on price."

Wenzel expects that in the near future the improvements in vibration dampening will become a standard part of every plate - not an option.

Schulenberg says that improvements in steel, iron, and casting technology have improved the equipment, which translates into on-the-job improvements. He says Wacker Neuson's WP1550 plate has a ductile iron base plate, replacing the fabricated steel plates the company used to use. Those plates were composed of several steel plates welded together - and welds don't react well to vibration.

"The ability to cast in different shapes has also made an impact on the job and the jobsite," he says. "The design of the shape of the plate is a balance between good compaction performance and maneuverability of the plate.

"If the plate is designed with large rounded edges it's easy to maneuver while maintaining a good finish, but then you only provide compaction over a small area. However, if the edges of the plates are not shaped properly - if they're not rounded and smooth - the plates will leave marks or cuts in the mat."

Plastics. Schulenberg highlights the general acceptance and development of plastics and polymer technologies as playing a broad role in compaction innovation. "There's a lot more plastic on our new machines today than there was 25 years ago," he says. "Not only was it not available 25 years ago but it's much more accepted today."

He says use of plastics and polymers enabled manufacturers to make a number of important innovations, including improving their watering systems. "If you don't have a good watering system you won't have a quality finish to your job. Old water tanks used to be made of steel, and if you let any water sit in them over the winter they would rust. Then the next season the rust would flake off and clog your lines and suddenly there you were in the middle of a job with no water for your roller. New tanks are plastic so they don't have that problem at all.

"Plastic also allows us to design unique shapes and geometries we couldn't effectively do with steel because we can mold plastics into any shape we need. That means water tanks can be larger so you can carry a larger quantity of water on your roller so you don't have to stop and fill as often. It's a productivity issue."

Changes throughout the industry have led to increased compaction production, and manufacturers say that's a result of higher amplitude in the drums and increased vibration frequencies.

"The ability of machines to have higher amplitudes in the drum allows more energy to be put into the material, which means contractors can construct deeper lifts," Marcum says. "Higher amplitudes allow us to more efficiently compact the material with fewer passes of the machine."

He credits improvements in both the bearings in the drums and the lubricants for much of this gain. "If you go back 25 to 30 years the rating of machines in centrifugal force was around 25,000 lbs. Today they're in the 70,000 to 80,000-lb. range. Better material of bearings and better lubrication of bearings have supported that."

Hood adds that higher frequencies add to the impact of greater amplitude. Vibrations per minute (VPM) indicate how many times a minute the drum hits the material, and higher frequency allows faster rolling speeds, which results in more production. "In some cases we are seeing 4,000 VPM on highway class rollers, and that's a very high jump we were able to make because of the increased power that delivers very efficient compaction performance for the contractors," Hood says.

Wenzel says that high frequency vibrations have made an impact on the compaction operation and adds that the ability to change vibration speed - offered primarily on larger highway rollers - is another innovation that results in better compaction. "This allows the user to adjust the unit to the materials and conditions, which will result in a better finish," he says.

Marcum adds that the addition of systems that control the impact spacing have also helped improve job quality by maintaining consistency. "These speed control systems operate like the cruise control on a car," he says. You can operate manually or you can set the machine to operate automatically.  This leads to better job quality because if we can control the spacing at which the drum hits the mat, we'll have a consistent product beneath the machine.

Contractors are now able to match the amplitude and frequency of the roller and adapting it to the material beneath the drum," he says. "The industry has gone from one default setting to up to eight different selections that can be made, so you can compact with a fewer number of passes without overcompaction. Hitting it hard enough to compact without overcompacting leads to efficiency."

Hood adds that where single-drum vibration used to be the norm for years, rollers are now available with vibration in both drums, which increases the effectiveness of the roller and the efficiency of the operation. "Vibrating two drums on highway class rollers typically takes twin pumps, and the more drum horsepower you have the more productive you'll be. "

He says that what has trickled down to the commercial rollers is a shift to more vibratory rollers instead of static rollers.

"Although vibratory rollers have been around for some time it took a while for their popularity to trickle down to the smaller roller market/residential compaction market," Wenzel says.

Bomag America's John Hood says the single biggest innovation in compaction is intelligent compaction systems in the roller. Used currently on rollers 66 inches wide and larger, intelligent compaction monitors the stiffness of the mat as you compact it, the mat surface temperature, and the amplitude of the roller.
"One of the bigger weaknesses is over compaction and if you overcompact you start crushing the stone in the mix and reduce the integrity of the mat," Hood says. "Once you establish a rolling pattern intelligent compaction helps you get the density you need without a risk of overcompaction. Plus, intelligent compaction increases the consistency of the mat, can find weak spots when you're proof rolling, and can reduce the time the roller operator spends on the mat because once it's compacted you can get off."
Frank Wenzel, vice president of engineering for Stone Construction Equipment, says this is the innovation most likely to make the biggest impact on paving operations in the future. "More and more contractors will be using it because it allows the user to get a better road built, which means the lifecycle of the road will lengthen and maintenance costs might come down."