When enough is enough 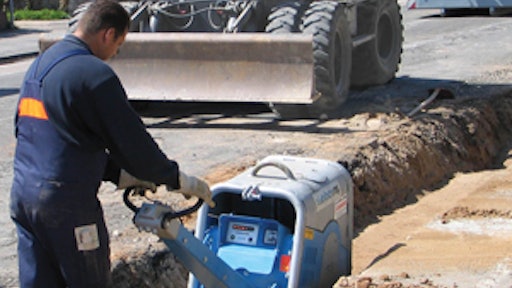 Here's a typical jobsite with an all too common problem: a soil compactor is being used to compact the sub-base of an under-drain project. Four passes have already been completed, but when is the soil sufficiently compacted? When is enough really enough? Weber MT answered that often-asked question in 2004 with the introduction of Compatrol, the first continuous compaction control system designed specifically for hand-guided reversible-plate soil compactors.

Depending on the type of soil being compacted, Compatrol will indicate to the operator the level of compaction achieved at any stage during the compaction process, even up to the point where over-compaction would occur if Compatrol were not monitoring the process. Avoiding the additional expense associated with having to rework and replace soil that was either not compactible or even worse, might have been over compacted, makes Compatrol a valuable job tool. One added benefit is: homogeneous compaction means quality assurance is possible, even in confined work areas.

Compatrol consists of a display panel mounted on the dash of the machine and a sensor attached to the base plate. The display panel contains a series of seven yellow light-emitting diodes, provided to visualize the degree of compaction of the soil. The number of lighted diodes rises as compaction increases and remains constant as maximum compaction is achieved.

The maximum compaction which can be achieved depends on the type and composition of the soil. On sandy mixed soils the maximum compaction will be achieved showing fewer lighted diodes, while a greater number will be illuminated on a gravel-crushed aggregate mix with reasonable water content. In the course of his work the operator will easily become familiar with the functional operation of Compatrol and answer with confidence when asked the question, "How do you know when enough is enough?"