A little attention before and after use adds big dividends in rammer life. 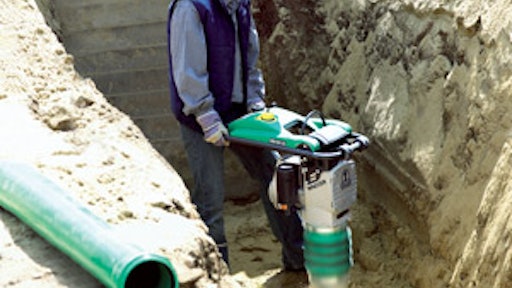 With a cost range of $2,000 to $3,000, rammers might not be the most expensive equipment on a jobsite. But they are a highly effective tool when used in the right soil conditions.

"Rammers deliver a force to compress and squeeze out air and water that have entered soil whenever you've disturbed it," notes Peter Price, manager of product and training, Bomag Americas Inc. "To be most effective, though, use rammers on compactable cohesive soils, which are clays, silts and mixes."

Vibratory plates are designed for sands and granular soils, but rammers are what you need for cohesive dirt or mixes (60% to 70% cohesive).

"Rammers are a superb method for attaining maximum density on most cohesive soil with a moisture content in the 13% range," says Matthew Bennett, product development manager, compaction, Multiquip Inc. "Generally, granular soils require frequency, such as caused by the rotating eccentric weight of a plate compactor."

Using rammers on gravel or asphalt is a bad idea. "They won't work effectively in those environments, and you could damage the machine by breaking the shoe or spring," says Guy Boor, engineering project manager, compaction, Stone Construction Equipment.

"If you use a rammer on granular material, you will not achieve compaction and will just work your way into a hole," points out Fabian Salinas, product manager for concrete and light compacting equipment, Dynapac USA.

Service checks
Rammers are typically designed to give you a long service life. "I've frequently seen them working in the field for five to eight years," Salinas says. "Maintenance is the absolutely most important factor in achieving maximum longevity."

Manufacturers agree that you should read the operator's manual and follow its recommendations closely. Everything you need to know is in this booklet.

As a refresher, however, here are steps to perform before every use, or on a daily basis. These tasks take as little as five minutes, but can help identify most impending problems and avoid costly breakdowns.

"Top off if necessary, but don't overfill," Price advises. "This can cause extra oil pressure, which may eventually collapse the oil ring on the piston. Overfilling can result in oil contamination into the muffler, carburetor or air filter, as well."

"They're available in the marketplace and bring some advantages in terms of maintenance that four-stroke machines do not," he says. "The big advantage is that oil only needs to be added to the oil tank as required, eliminating the need for oil changes. This can be done in the field, without the machine coming into the shop. It also eliminates the need for waste oil handling and disposal. This can be significant for rental centers with large numbers of rammers in their fleets."

Getting back to maintenance tips, make sure you have a trusted source of clean fuel and check the fuel level.

In addition, check the air filter and clean it monthly, or more often if working conditions are quite dusty. "Air flow problems due to a dirty filter directly affect the rammer's performance," says Bennett.

"This is one of the top causes of accelerated wear or premature failure," Salinas adds.

Replace the air filter once a year unless there are tears, holes or large concentrations of dirt, or if you see signs of oil or water contamination. In such cases, change the filter immediately.

All operating manuals state a few other tasks that should be done monthly or yearly, such as checking speed and throttle adjustments, changing the spark plug, etc.

"Some manufacturers, like Multiquip/Mikasa, offer an hour meter/tachometer that allows the operator to monitor when service is needed," Bennett points out.

To avoid accelerated wear during use, warn customers to avoid running the rammer at the wrong engine speed. "A common mistake is to run a rammer at low RPM levels where the clutch is not fully engaged," says Price. "The constantly slipping clutch develops potentially damaging heat and wears itself out."

"With some machines, the operator needs to remember to shut the fuel valve so it doesn't flood the engine," Boor states. "Our machine has an electronic shutoff that not only kills the engine, but also shuts down the fuel flow."

Over compaction can lead to equipment damage, as well. "This practice actually decreases compaction density and can separate the aggregates," Price notes. "It also damages the machine by forcing the energy back into it instead of into the soil. If the rammer begins to jump erratically, it's a clear sign you've overcompacted the soil."

Another practice to avoid is forcing or pushing the machine. "Let the [rammer] do the job itself," says Price. "You shouldn't manhandle it or tie ropes on it to make it move along faster. This can be dangerous for the operator and bad for the machine's shock mounts."

Because rammers are fairly lightweight, users tend to just toss them in the back of a truck when it's time to move to another jobsite. This is not a good idea.

"A rammer should be properly secured for transport so it won't fall or move during travel," Bennett says. "Usually it's best to tie older rammers (with two-cycle engines) in an upright position, if possible, so they won't leak fuel or get damaged. Many of the newer models are designed to lay on their side."

Boor agrees, noting, "In the past, it wasn't a good idea to lay them down during transport because it would flood the engine's carburetor, causing starting problems. Most rammers currently on the market feature four-cycle engines that have been designed specifically for rammers and can be moved in most any position."

Conrardy at Wacker points out, "Most machines today can be transported in any position, regardless of the engine type."

In any case, securing the machine is important so it doesn't move when the truck does. "Treat it like other investments, and don't throw rakes, shovels or wheelbarrows on top," Price adds.

"Mistreatment during transport is one of the three top reasons a rammer can experience premature failure, along with not checking the air filter and running it low on oil," Salinas comments. "Follow the manual and you can prolong rammer life, and reduce operator fatigue."

Produces a percussion rate of 678 bpm with a stroke height at the ramming shoe of 2.9 in.
Wacker Neuson Corporation
February 23, 2016

Atlas Copco rammers in the 50- and 60-kg weight class are powered by Honda engines and designed for compaction work in confined areas.
March 20, 2015

The slimmer design of the LT5005 and LT6005 rammers facilitates handling close to walls, posts or in narrow trenches. Atlas Copco's new rammers are easy to handle in every stage of operation and reliable in all conditions.
Atlas Copco Power Technique
February 11, 2015