Not all HMA mixes are created equal, but they all need compaction. 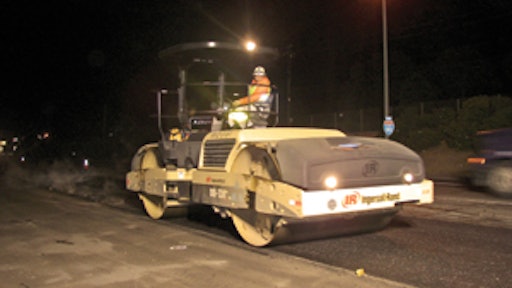 All hot mix asphalt (HMA) mixes need to be compacted to a low air void content (typically less than 7 percent) in order to achieve a long service life under traffic. More and more, the asphalt binder material used in the HMA is polymer modified to improve the resistance of the mix to permanent deformation (rutting) and improve the fatigue life.

In general, the use of a polymer modified binder increases the stiffness of the mix and makes it more difficult to compact. Some HMA mixes, however, even polymer modified ones, are very tender and move under steel wheel rollers when being compacted. This is particularly true for coarse graded Superpave mixes — mixes with aggregate gradation plots below the maximum density line below the No. 8 sieve.

The characteristics of the HMA must be taken into account when a contractor sets up a roller pattern to compact the mix. The type, number and position of the rollers will be different for the densification of a stiff mix than for the compaction of a tender mix. An analysis of the volumetric properties of each mix is needed in order to anticipate, before construction, whether the mix will be stiff or tender.

An example of the compaction techniques used to compact a stiff HMA is the current paving project on Interstate 80 east of Sacramento, CA. This Caltrans job is being constructed by the Teichert Construction Co. The basic paving project calls for the removal of 4 inches of the existing asphalt pavement by milling and the replacement of that layer with 4 inches of HMA base course mix containing aggregate with a maximum size of 1 1/2 inches. This new layer is to be covered with 3 inches of HMA containing a 3/4-inch maximum size aggregate, placed in two layers. The final surface course is to consist of 1 1/4 inches of an open graded mix containing asphalt rubber.

Due to the type of aggregate used in the base course and the gradation of the mix, the mix was stiff. In addition, the polymer modified binder made the mix even stiffer. To overcome this problem, Teichert changed their typical rolling pattern. The mix was placed using a Cedarapids CR 556 paver equipped with a Cedarapids MS-2 pickup machine.

Initial (breakdown) rolling was accomplished using an Ingersoll-Rand PT-240R pneumatic tire roller. This roller made a minimum of three passes over each point in the pavement surface. Because the base course was placed in a confined edge (trench) section, the outside tire of the roller was placed directly over the vertical longitudinal joint on each side of the lane.

Intermediate rolling was completed using an IR double drum vibratory roller, a DD 138 HFA, operated in a high frequency and a medium amplitude setting. This roller made a minimum of three passes over each point on the pavement surface. Initially, an IR DD 110 HF double drum vibratory roller was employed as a static finish roller. It was quickly determined, however, that the finish roller was not needed.

The required density levels were achieved on the stiff mix with only two pieces of compaction equipment instead of three or four.

A completely different type of rolling pattern was needed to compact a very tender base course on a HMA paving job in North Dakota. This project, on the Grand Forks Air Force Base, consisted of placing 9 inches of new HMA material over a rubblized Portland cement concrete base course on Runway 17-34. This reconstruction project was awarded to the Strata Corp. of Grand Forks.

Due to aggregate size considerations and the need for smoothness, the total thickness for the runway mix was divided up into three equal layers of 3 inches. The base course layer contained a maximum aggregate size of 1 inch while the upper two layers used an aggregate with a maximum size of 3/4 inch.

The base course, which was designed using the Marshall method, contained a PG 64-34 polymer modified asphalt binder. Due to the aggregate gradation limits in the specifications, it was impossible to develop a stable mix even though the coarse aggregates were highly crushed and the fine aggregates had a fine aggregate angularity value over 49.

Strata Corp. was required to construct a test section to show that the required level of density could be obtained before paving was permitted to start on the main runway area. It was quickly determined that this mix, even though it contained poly mer modified binder, was extremely tender. The mix had a tendency to move and shove excessively when a double drum vibratory roller was used in the breakdown position, even when this roller was only used to make one or two passes over the mix. The mix checked badly (short, transverse cracks appeared in the surface of the mix) if additional passes with the vibratory roller were made.

When surface temperatures were measured with an infrared thermometer, it was found that the tender zone extended from about 240 degrees F down to less than 140 degrees F. To keep the mix from moving under the double drum steel wheel finish roller, operated in the static mode, it was necessary to roll when the mix surface temperature was under 120 degrees F. The tenderness of the mix made it impossible to obtain the desired level of density using a normal rolling pattern.

The mix was produced at a rate which typically exceeded 400 tons per hour. The mix delivery temperature was increased to enlarge the range of the upper temperature zone. The mix was placed using a Roadtec SB 2500 material transfer vehicle to deliver the HMA material into a Blaw-Knox PF 3172 paver.

A revised compaction train was then used to compact the tender mix. Breakdown rolling was done using two double drum vibratory rollers operated in echelon. A Dynapac CC 501 roller was used on one side of the 12-foot-wide lane and a Cat CB 634 B roller was employed on the other side. The rollers were wide enough to compact the full width of the lane and also overhang the edge of the lane by 6 inches on each side, as well as overlap by 6 inches in the center of the lane. These rollers each made five passes over the mat, all in the upper temperature zone, directly behind the paver screed.

Intermediate rolling was carried out using two pneumatic tire rollers. One of these two rollers was a Cat PS 360B. The other was a vibratory pneumatic-tire roller — a Sakai GW750. Both were operated immediately behind the two vibratory rollers — within 300 feet of the paver. Due to the difference in the size of the two pneumatic tire rollers, they were operated with one directly behind the other.

No finish roller was used for the compaction of the base course mix. Due to the tenderness and temperature of the mix when compacted with the two pneumatic tire rollers, the pneumatic tire rollers were able to remove their own roller marks and produce a smooth pavement surface. With the change in the rolling pattern, the required level of density was then consistently achieved.