Is one compaction approach a better option when it comes to getting the best asphalt compaction? 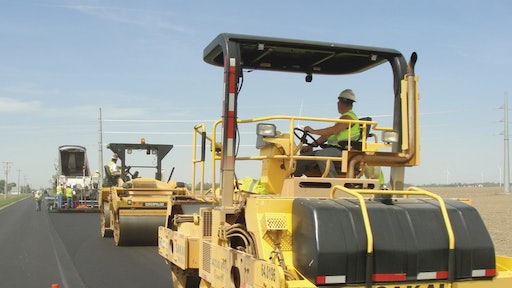 The rolling train is the most common compaction approach, but echelon rolling may be the best option to compact while the asphalt is at higher temperatures.

What compaction approach is better, rolling train or echelon rolling?

The most-common approach to compaction, but not necessarily the best, is a rolling train, which involves a series of rollers operating one after the other close behind the paver. The train starts with a double drum vibratory roller operating close behind the paver to obtain the initial compactive effort while the mix is still hot.

A rule of thumb is this “breakdown” rolling should be completed before the surface temperature of the mix falls below 240°F. The breakdown roller should be operated at the highest possible frequency level available for the particular make and model of roller and at an amplitude setting that is dependent on the thickness of the asphalt mat being placed.

“If the pavement is an inch or less in thickness, do not vibrate,” says Jim Scherocman, P.E. and National Pavement Expo speaker. “The roller will simply bounce. Then all you’re doing is beating the heck out of the pavement and the roller. If you’re 1.25 to 2.25 inches, use a lower amplitude setting. If you’re over 2.5 inches, you can put the roller in a higher amplitude setting.

“A lot of roller operators do think they can take a thin lift and kick it into high amplitude, and they just tear their roller apart and create ripples in the mat,” Scherocman says.

The next part of the train, intermediate rolling, is usually done with a vibratory roller as well and must be accomplished immediately after the initial rolling is completed. When a pneumatic tire roller is used as an intermediate roller, it is necessary to keep the tires at the same temperature as the mat being compacted — otherwise the rubber tires will pick up some of the mix from the mat. So when using a pneumatic roller, don’t allow the roller to sit and wait for long periods of time as the tires will cool.

The final roller in the train is a static steel wheel roller for finish rolling. The primary purpose of finish rolling is to obtain the “last little bit" of density and to remove the marks, if any, left by the first and second rollers. When needed, finish rolling should be accomplished at a mix surface temperature above 175°F. "Only the finish rolling, the last rolling done, should be done in a static mode," Scherocman says.

Given that the best time to achieve the greatest density is when the mat is hottest, it makes sense to get as much compaction at the higher temperatures as possible. Scherocman says the best way to do that is to operate two rollers in echelon —side by side — down the mat. This enables the full width of the mat to be compacted while that mat is hottest. 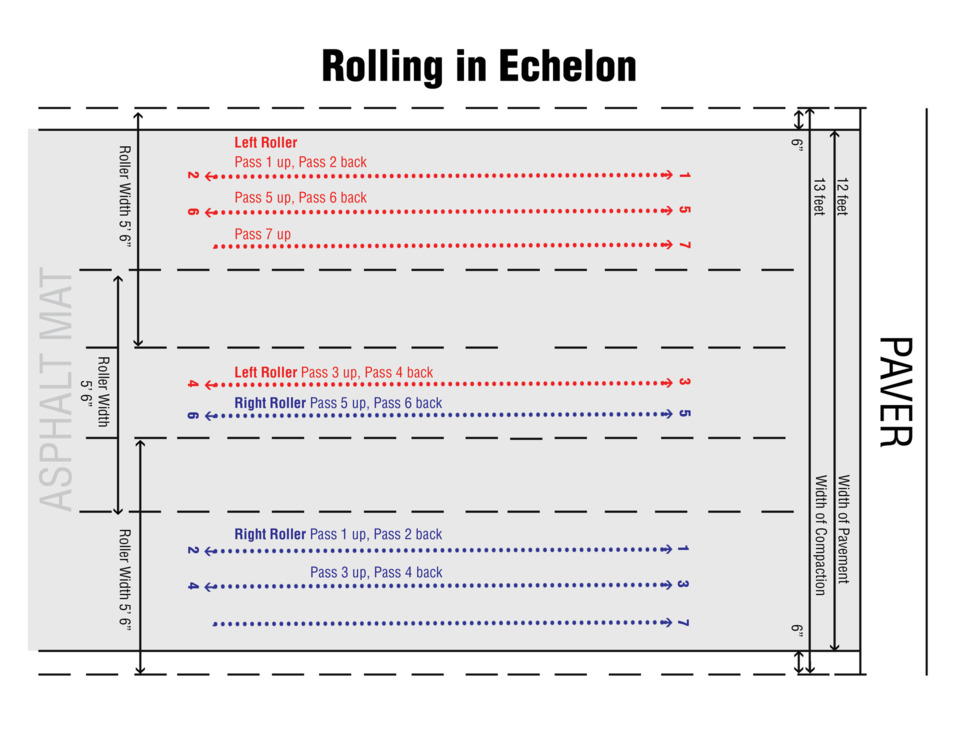 Take a look at the diagram above, which shows how this works on a 12-foot-wide lane with two double drum vibratory rollers that are each either 66- or 78-inch wide. The two rollers, operating in echelon (staggered and offset in adjacent lanes) in the breakdown position directly behind the paver, are operating at maximum frequency and at an amplitude setting that is proper for the layer thickness being placed.

1. The first roller (red, on the left close behind the paver) compacts the left side of the mat with two passes (numbers 1 and 2) up and back in exactly the same position, hanging over the left edge of the lane or joint by 6-inches (A pass is defined as one time over a point in the pavement surface).

2. At the same time, operating at an offset distance of 10-feet behind the red roller in echelon, the second double drum vibratory roller (blue) makes its first two passes (passes 1 and 2) on the right side of the pavement, hanging over the right edge of the lane or joint by 6 inches.

4. The blue roller, still staggered and offset about 10 feet behind the red roller, makes passes 3 and 4 up and back — over the right side of the mat, again hanging over the right edge of the lane or joint by 6 inches.

5. The red roller moves to the left edge and makes its passes 5 and 6 up the left side of the mat (over the first two passes made by that same roller and again hanging over the edge by 6 inches.)

7. At the end of pass 7, the red roller continues up to the back of the paver and then begins the pattern over again.

8. For blue pass number 7 on the right, the blue roller again moves back to the right side of the lane and makes its last pass over the top of its first four (1, 2, 3, 4), again hanging over the edge or joint.

9. At the end of pass 7, the blue roller continues up to the back of the paver and then begins its pattern over again, still staggered and offset behind the red roller.

Scherocman says this rolling pattern will work for any mix, even a tender mix, as long as the pavement has not yet reached a temperature zone below 240°F.

When the mix reaches those lower temperatures, there is no longer enough time to achieve the proper density with this pattern.  “The key is get the compaction done before the mat temperature reaches 240°F,” he says.