Manitowoc cranes were used to drill overburden, bore through steel debris and position temporary falsework frames during the demolition and rebuilding of a Halifax shipyard wharf 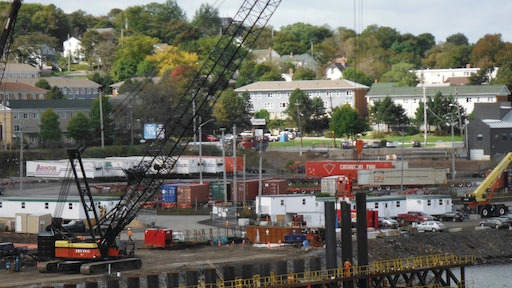 A Manitowoc 2250 operated as a Berminghammer Drill, which is used to drill overburden that consists of marine sediment, small boulders, and rock sockets; to bore through steel debris; and to position temporary falsework frames. Two Manitowoc 12000s operated as support cranes on the site.

As part of the Halifax Shipyard Modernization Program, a wharf at the Halifax, Nova Scotia, shipyard was demolished and rebuilt. Demolition of the buildings and foundations, as well as construction of the wharf, occured within the fully operational port.  The new wharf will measure about 850 feet in length and 65 feet in height.

Operated by Saint John-based Irving Equipment Limited, this trio of cranes was chosen for their long reach and high capacity capabilities.

The Manitowoc 2250 operated a Berminghammer Drill, which was used to drill overburden that consisted of marine sediment, small boulders and rock sockets; to bore through steel debris; and to position temporary falsework frames. The two Manitowoc 12000s were operating as support cranes on the site.