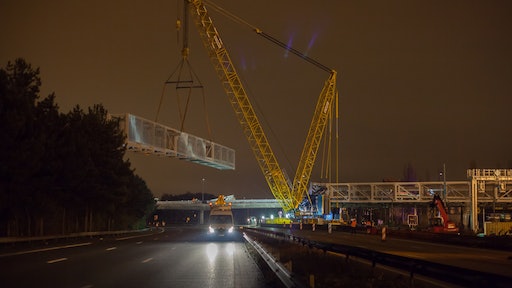 The crane service provided carried out a trial lift prior to the actual project to make sure the crane and the load-securing devices could handle the task.

Crane service provider Sarens used a Terex Superlift 3800 lattice boom crawler crane to lift a pedestrian and bicycle steel bridge over the A4 Autoroute near Schiltigheim, in Alsace, France. The conditions of the project were unique, and the Terex Superlift 3800 was the only crane in the company's fleet that could handle the job.

“We didn’t have a special permit for a heavy-load transport with the required weight. That meant that we first had to figure out how exactly we’d be able to get a crane with the necessary lifting capacity to the site,” reports Sarens project manager Joost Elsen. The Superlift 3800 crane made it possible to overcome this challenge with its special “Quick Connection” feature which makes it possible to disassemble the crane’s basic structure into two parts in order to significantly reduce the weights involved in transporting the machine. It is also what enabled the Sarens team to get the Superlift 3800 crane to the site without problems. A total of 56 transport vehicles were required, and these vehicles faced an adverse situation of their own. Since the access road to the site was extremely narrow, the trucks had to drive on a gravel road for just under one mile, in reverse and one by one, before reaching the spot where the crane would be set up. Despite this time-consuming procedure, the Sarens team was able to get the Superlift 3800 crane ready on time with four assembly technicians and the crane operator. “The crane’s ease of assembly literally paid for itself in this case,” Elsen emphasizes.

The lift was performed on a Saturday night to minimize traffic interference. Since it required for the highway to be completely closed near Strasbourg, the team did not want to risk any delays whatsoever. Because of this, they carried out a trial lift of the 162-tonne bridge section in advance in order to test the crane, as well as the load-securing devices they would be using. Once this trial lift was completed without a hitch, the team was able to relax as they looked forward to the actual job, even despite the fact that it would have to be carried out under tight space conditions. In fact, the operator would only have a 72-foot-wide maneuvering area available to work with, its borders being drawn by the highway and by the train tracks running parallel to it.

For the lift, the Sarens technicians set up the Superlift 3800 crane with an SSL1 configuration, a 177-foot main boom, and 325 tonnes of Superlift counterweight so that the machine would be able to pick up the bridge section at a working radius of 131 feet. In order to prevent the 213-foot-long and 114-foot-wide load from swinging around when lifted, it was slung to a perfectly balanced spreader. This enabled crane operator Michael Bräckle to safely lift the component to a height of 65 feet. After this, the main boom was raised in order to reduce the working radius to 95 feet so as to be able to lower the Superlift counterweight radius from 59 to 36 feet. With this compact configuration, the crane was able to turn 180 degrees within its tight working area and swing the bridge over the highway. “To do this, we used the crane’s Vario Superlift system, which was developed precisely for this kind of scenario – a clever idea from Terex,” says crane operator Bräckle when praising the feature. Once the bridge was swung over the highway, the crane moved forward about twelve meters under load. When the crane had reached its final destination, the main boom was brought down and the Vario system was used to bring the SL counterweight back to a radius of 59 feet. Finally, the bridge section was lowered onto the bridge piers at the original working radius of about 131 feet.

“We would have never been able to do this job without the Superlift 3800. Without the Quick Connection feature, we wouldn’t have been able to get a machine that was powerful enough to the site, and without the Vario Superlift system, there wouldn’t have been enough space for the lift. In fact, these are perfect examples of the technological ingenuity behind the Superlift 3800 that won us over from the start. That’s why we have three of them in our fleet,” Elsen says, happily summarizing his company’s experience with the unit.