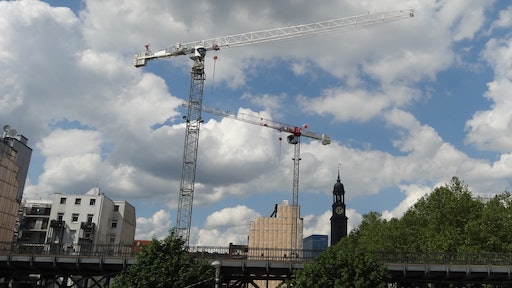 The two Terex tower cranes spent about twelve months in view of the world-famous St. Pauli Landungsbrücken Piers in Hamburg while working under unique conditions.

The two Terex tower cranes spent about 12 months in view of the world-famous St. Pauli Landungsbrücken Piers in Hamburg while working under unique conditions. “Projects in urban downtown settings are always associated with special challenges, and that’s especially the case when it comes to a big, lively city like Hamburg,” explains Proschwitz GmbH General Manager Detlev Proschwitz.

The first challenge was the lack of space around the areas where the two Terex tower cranes would be erected. In fact, just getting the cranes from Proschwitz’s headquarters in Trittau to the worksite with 13 trucks was already a small logistical challenge despite the short distance of 22 miles – after all, cramped downtown areas are hardly the natural habitat of heavy goods vehicles.

Despite this and the limited space conditions at the actual worksites, however, the Proschwitz team was able to erect the two cranes on time, with each one taking only one day and three assembly technicians.

“We didn’t have any more time available anyway, as we had to keep the necessary road closures to a minimum. That’s where the CTT cranes’ ease of erecting really came through for us,” Proschwitz emphasizes.

In addition, the two Terex tower cranes had another feature that made it seem as though the units were simply destined to work on the project at the Hamburg site — their variable frequency drives, which guaranteed low inrush currents, protecting the city grid from unmanageable voltage fluctuations. “If there was one thing we really didn’t want to do, it was to leave the Landungsbrücken Piers without electricity,” as Detlev Proschwitz succinctly puts it.

For the project at the St. Pauli Landungsbrücken Piers, the Proschwitz team erected the CTT 91-5 flat top tower crane free-standing on a C38 cruciform base, and the CTT 161A-8 flat top tower crane on cast-in-place anchors. With a jib length of 131 feet and a hook height of 162 feet, the CTT 161A-8 was perfectly set up to lift construction materials weighing up to 9,149 pounds from the jib tip. Its maximum lifting capacity was 17,637 pounds.

With these configurations, the two Terex tower cranes performed their work smoothly and reliably for a total of 12 months, even when exposed to wind and inclement weather. As a result, Construction Manager Robert Friske from Köster AG, the primary contractor on the project, was also completely satisfied with the Terex machines.

“The high-pressure deadlines normally involved in this type of construction projects mean that we can’t afford any equipment downtimes. This means that dependable machinery, such as these two tower cranes, is crucial to a successful project completed on time,” Friske said.

After the work was completed, the cranes needed to be disassembled quickly, as both the port’s anniversary celebration and the Hamburg Marathon were just around the corner. Due to the extremely constrained space conditions, it was not possible to tear down the CTT 91 crane using a mobile crane. However, the fact that the tower crane can be easily dismantled into smaller components meant that the CTT 161 crane was able to take care of the task and safely disassemble its “smaller sibling.” “The option of being able to disassemble the slewing unit came in really handy,” explains Proschwitz. “There’s no other machine with that available!”

After the CTT 91 was dismantled, the CTT 161 was disassembled in six hours with the help of a mobile crane.