How To Size Compact Track Loaders for Construction Jobs 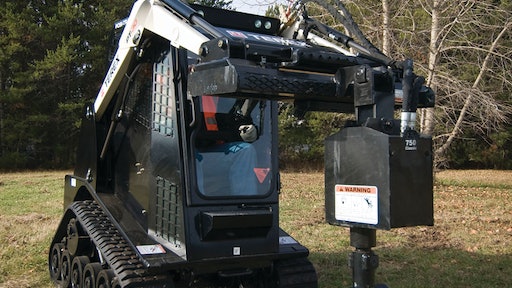 When sizing a compact track loader, take into account the weight and hydraulic capacity requirements of any attachments it will be required to run.

More weight, more traction, and increased versatility have carved an important niche for compact track loaders (CTLs), allowing them to perform handily in a variety of environments. The word "variety" is key here, as application determines just what size and type of CTL is best suited for your operation and is most likely to deliver optimum performance.

"Contractors always need to make sure they're getting the job done on time. With construction, it's all about meeting deadlines," says Ashby Graham, JCB product manager for skid steers and compact track loaders. "Choosing the right CTL for the job can have a definite impact on the amount of time it takes to complete tasks on the work site, so make sure your CTL has the power and capacity you need."

"Specifying a loader for maximum productivity, however, isn't as simple as choosing a loader with the most horsepower," he cautions. "Yes, horsepower and rated operating capacity (ROC) are two important factors, because they directly relate to the amount of dynamic force available for pushing and other production-related activities. But there are other factors to consider, as well."

David Steger, product and training manager, Takeuchi-US, agrees, noting, "Sometimes, depending on the application, you just need larger equipment. But overall, I think most contractors are looking for versatility. Many jobsites require compact, highly mobile equipment that is capable of handling serious workloads. It can be a trade-off. If a contractor needs something powerful, he's going to need a larger track loader.

"Instead of concentrating on factors such as tipping load or ROC," he continues, "contractors should really focus on how they plan to use the machine. If they're grading, landscaping, excavating or performing other tasks where they're moving dirt and material, they may want to focus more on the engine power and measured power of the machine, i.e., specifications such as bucket and lift arm breakout force or tractive force. If they plan to use the machine primarily for lifting very heavy objects throughout the entire lift range, then they may want to concentrate on the machine's tip load and ROC."

Flotation, power and durability tend to epitomize CTL performance and value. "Flotation (or ground pressure) is important because CTLs are at their strongest in soft conditions, determined by environment or time of the year," says Sean Bifani, Mustang track loader product manager.

Joey Gioe, owner/partner of Varuso Group in Madisonville, LA, operates five CTLs in his excavation company, including a recently purchased JCB model. "We use them all year round for a variety of applications," says Gioe, who has been in business for 23 years. "The ground conditions down here make the use of tracks mandatory. Conversely, wheeled machines are very limited where they can operate."

Beyond the ground conditions, Gioe says ROC is next on his list of concerns when buying a CTL. "We move a lot of material at one time, including concrete, and need a machine capable of getting the job done," he says.

When selecting a CTL, it's important it have the capacity to handle the types of material you will be moving. "The weight of the material and how quickly it needs to be moved will influence the bucket size — the bigger the bucket, the bigger the loader," says Wright. "Miles per hour and boom speeds also affect productivity. Boom speed will determine how fast the loader can load and unload material, whereas travel speed will indicate how long it will take to get from point A to point B — both of which impact cycle time."

"Drawbar pull and hydraulic horsepower determine overall machine power," says Bifani. "Drawbar pull is the ability of a track loader to push through loads without stalling or losing traction. Hydraulic horsepower, measured by flow and pressure, determines the overall performance capability. More flow and/or higher pressure integrated into the design of a model increases the amount of work a loader can complete, and how quickly."

In addition to hydraulic pressure and flow, consider the design and capacity of the cooling system. "Larger coolers and high-capacity steel hydraulic tanks have the ability to dissipate heat from the oil much more effectively than a machine with smaller coolers or small hydraulic reservoirs," says Steger. "Cooler oil means cooler components for both the machine and attachments being operated, and that relates to longer lubricating oil life and the life of the machined components they are meant to protect."

Size to the task and jobsite

When sizing a CTL, take into account the heaviest load the machine will have to handle at any point during the job. Then choose a machine that can effectively manage that load based on ROC, Graham advises.

"A machine can always pick up a lighter load than the one for which it is rated," she comments. "But if you try to pick up a load that is too heavy for a particular machine, the CTL can become unstable and unsafe."

Having the right-sized CTL increases productivity, as well. "Upsizing to a larger machine allows operators to carry heavier loads (and more material at once) and run larger attachments. This leads to jobs being completed faster," Graham asserts. "Contractors who can perform jobs in less time can contract for more jobs overall, ultimately leading to great profits.

She prefaces this by adding that bigger is not always better. There are not only towing limitations to take into consideration, but jobsite limitations, as well, especially if contractors are usually working in smaller areas such as residential backyards," she states. "Operating a large machine may make it difficult to maneuver around buildings, fences and other obstacles."

Do you need to push or lift?

CTLs are available with radial or vertical lift arm configurations.

"When comparing the performance of radial-and vertical-lift machines, think geometry," says Bifani. "On radial lift configurations, as a load is lifted or lowered, it will arc slightly outwards at the mid-point of the lift cycle. Compare that to vertical machines, where additional linkages and pivot points provide more vertical movement of loads. As loads move straight up and down, vertical lift geometries tend to have more forward reach at full height."

These differences make each configuration better suited to certain tasks. "Radial lift machines are best suited for doing work such as pushing, prying and digging," says Curtis Goettel, brand marketing manager, New Holland Construction. "Their configuration ties the rear of the arms directly into the chassis and rests the front of the boom against the lower chassis. The downside is that the lift path retreats over the cab as the bucket goes up."

Radial lift machines are also well-suited for applications that require more reach at the mid-point of the lifting path, says Graham, such as loading and unloading a flatbed trailer. In addition, any harsh applications such as waste removal, recycling or demolition typically favor radial-lift machines, as they have fewer pins, bushings and pivot points that are affected by wear and tear.

Vertical lift machines, on the other hand, are designed for 'lift and carry' and loading applications. "Their design has two pivot points, allowing the bucket to stay forward as it goes up," Goettel explains. "Some even extend further out as they rise. This allows much better 'reach' at full height, ideal for tasks such as loading high-side trucks."

Customize for productivity and comfort

CTLs can be equipped with any of several options to increase their productivity and contribution to the bottom line. Among them are multi-function controls, high-flow hydraulics, a two-speed drive system, different tracks and a power quick–attach system.

"Often, track machines operate multi-function attachments such as forestry cutting heads that require multi-function controls," Graham notes. "Instead of being located in old-style junction boxes, the controls are now located conveniently in a joystick. High-flow hydraulics allow machines to work with a wider range of attachments, and two-speed transmissions can speed up travel time around jobsites."

"A very popular option for Mustang CTL operators is a power quick-attach system," Bifani indicates. "New models also include options that deliver selectable control patterns and manage the operation of the hydrostatic drive systems. The former offers ease of operation, whereas drivetrain management fine tunes the machine's power, speed and operation to the exact application requirements."

Fully enclosed cabs continue to be a popular option, allowing operators to work in comfort year round in a clean environment. This has proven an important option for the Varuso Group.

"Having an all-enclosed cab not only keeps the operator out of the weather, but it also keeps the machine clean," Gioe says. "Operating a sweeping attachment without a cab can be a disaster for the operator and machine, not to mention how important it is to have an air conditioned cab during the hot and humid Louisiana summers."

Other options, such as an electronic self-leveling bucket, can further enhance the productivity, and ROI, of the machine. "In the average price range of a compact track loader, most all options are very affordable additions that significantly increase productivity and flexibility of the machine and therefore deliver payback quickly," Goettel asserts.

The important thing is to think long term. "Contractors should first ask themselves, 'What am I going to be doing with the unit, and what might I need to do in the future as my business grows?,'" says Goettel. "Buy a machine that is capable to do those jobs, and maybe a little more. Don't always buy the largest and most powerful machine you can get. Instead, get what you need and use the leftover budget to equip that machine with features that make you even more productive."

Push Past the Basics of CTL Selection