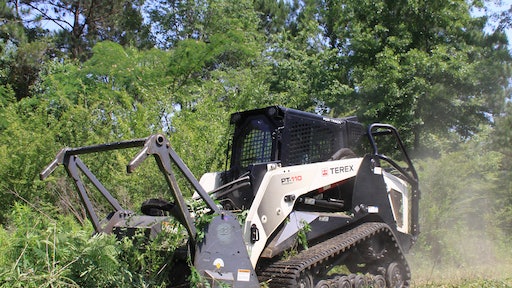 John Moore, a retired general surgeon practitioner, started out clearing on his farm and for his friends. As he gained more experience, he decided to build it into a business.

Few land clearing companies have as interesting a journey as Surgical Land Clearing. Not long ago, John Moore, owner of Surgical Land Clearing in Dothan, AL, retired after more than 25 years as a general surgeon practitioner. "I was 55 and staying up all night started to wear on me," he says. "I was fortunate enough to financially be able to retire."

Retirement meant that he had plenty of time to work on his small farm, and so he did. He began clearing the undergrowth and fence lines on the property. It was at this time he started looking into compact track loaders to help with the effort. He researched different models and put his name on a list to rent a compact track loader from a local distributor.

Unfortunately, the opportunity was never realized. "I waited two months for an opportunity to rent a machine through a local distributor program, and the unit caught on fire just before it was my turn to rent it,” Moore explains. "That is when the distributor stopped the program."

He continued to look at different compact track loader models, and his research took him to AGF Machinery, LLC, a Terex Compact Equipment distributor in Dothan. There, he found an old friend and exactly the machine he was looking for.

"John and I have known each other a long time, and he knew of AGF Machinery's reputation for strong service," says Hugh Swicord, sales manager for AGF Machinery. "He was looking for a forestry machine for his farm, and I also had a business opportunity in mind for John."

Swicord showed Moore the 111-hp PT-110 Forestry compact track loader, which is designed specifically for forestry applications. It offers a high engine peak torque and 45-gpm hydraulic oil flow to meet the special demands of land clearing. This impressed Moore, but his attention was drawn to a specific set of features.

"For me, safety is a high priority, and the safety design really impressed me," says Moore. "I really like the hydraulic reversing fan and that it can be set up to automatically reverse at 5-, 10- and 15-minute intervals. This allows the fan to blow the debris off the engine compartment to free up airflow back into the compartment."

Moore purchased the unit in March 2013 and took it back to the farm for his land clearing projects. He also helped some of his friends with their land clearing needs as his comfort level grew with operating the machine. It wasn't long before Moore saw the business opportunity and he explored starting a land clearing business.

Learning the Business of Land Clearing

"I knew there was a need for a commercial land clearing company in this area," says Swicord, "and Moore was the right person to fill this open niche." However, there was one drawback. Moore had no experience running a land clearing business — just the fun of clearing out his own property and that of his friends.

He started learning from ground zero — how to invoice customers, expenses involved in machinery maintenance and how to profitably bill out his services. "Basically, I had to learn how to run a small business," Moore explains.

He worked with AGF Machinery for guidance on considerations for billing out his services to include machine upkeep. "We took him through some of the maintenance, operating and wear expenses, like the time for cleaning the tracks, sharpening the planer attachment and routine maintenance," recalls Swicord.

Moore was confident that he had the right support partner. "AGF Machinery has an excellent sales and service staff," he says. "Hugh and Jeff Washington (owner) were instrumental in helping me to start the business. Joey Dees (service manager) gave me his cell phone when we first met, and I can call one of the most knowledgeable mechanics I have ever met 24/7 to keep me up and running. Without these two items, we would not be in business."

Moore had the right machine, the right service support partner and he was learning the business side of land clearing. In May 2013, he added a final piece to the puzzle when his son, Pat, decided to join the business. With everything in place, he placed an ad for his services in the paper, and Surgical Land Clearing officially opened for business.

Since opening for business, Surgical Land Clearing has had a backlog of jobs. Over the last year, both John and Pat Moore have provided a variety of clearing services in the Dothan area. They have worked for farmers reclaiming farmland, and have cleared undergrowth from acreages for hunting ranges. Work has also come from property developers, clearing land for new housing developments and building retention ponds.

One of the tricks John and Pat have learned is that the cutting head attachment makes all the difference. They use a Loftness planer (mulching) attachment, designed specifically for the PT-110 Forestry machine.

"The planer’s teeth cut right through the undergrowth and trees up to 8 in. in diameter without allowing the vines to wrap around the rotor," says John Moore.

Pat Moore adds, “It significantly increases our efficiency in cutting the material and allows us to clear more area in a shorter period of time."

The high-flow hydraulic system of the loader also aids in boosting performance and efficiency. Separate hydraulic functions and a 45-gpm flow rate allow this compact track loader to power through difficult cuts. "Even if the cutter head bogs down in the heavy undergrowth, this does not affect the performance of the arm movement or tracks," mentions Pat Moore.

The Moores learned quickly not to tear into clearing a property too fast just to get a job done in a shorter period of time. This created excess wear and damage to the cutter head attachment. "It's trial and error," John Moore notes. "We are cutting today at a 0.6 speed setting (on a scale of 0.1 to 1.0)."

In May 2014, Surgical Land Clearing was hired to clear a 5-acre plot of land that was completely overgrown with native vegetation in preparation for new house construction. "The property was full of invasive Japanese Privets, sweet gums and willow trees, along with native vines and vegetation," says John Moore. Prior to Surgical Land Clearing removing the undergrowth, there was barely a path for walking through the acreage.

Using "surgical" precision, Pat Moore began cutting through the vegetation on the 5-acre plot at 9 a.m. Starting at one end of the property, he left the cutter head slightly raised off the ground. "We do this to avoid striking any unexpected debris, like chunks of concrete, that weren’t picked up upon initial inspection," says John Moore. Fence posts, old logs and a couch were just a few of the unexpected items hiding in this overgrown Alabama plot of land.

The uneven ground traversed by the compact track loader could quickly fatigue an operator by jarring him inside the compartment, but such was not the case. "The PT-110 loader is designed with a dual suspension undercarriage that allows the bogie wheels to flex over irregularities, creating unmatched operator comfort," says Jon Ferguson, regional sales manager, Terex Compact Equipment. "Combined with the exclusive Posi-Track undercarriage and rubber on rubber connection, [it] also offers unmatched traction for working on grades and in marginal ground site conditions."

These features are noticed by the Moores, who both operate the loader. "We have so much fun operating it that we lose track of time when running the machine," says Pat Moore.

John Moore adds, "It’s a smooth and comfortable ride, like driving a car in the country. We only have one argument each day, and that is who gets to run the machine first."

Both father and son tag-teamed the 5-acre project to give each other an occasional break. By 2 p.m., John Moore reported that 90% of the initial clearing was finished, and the two would have another two to three hours to complete the job.

At the start of the project, the two-man land clearing crew anticipated that the job would take between six to eight hours to complete. With other models, John Moore says they would never be able to accomplish clearing the lot in one day.

"The efficiency and performance of the Terex machine is unmatched, and there is a dramatic difference with what we do with this machine vs. what our competition is doing with a lesser machine," he asserts. "We would have to set aside two to three days to complete this project with a competitive machine."

Compact Equipment and Forestry Attachments Get Equipped to Mulch