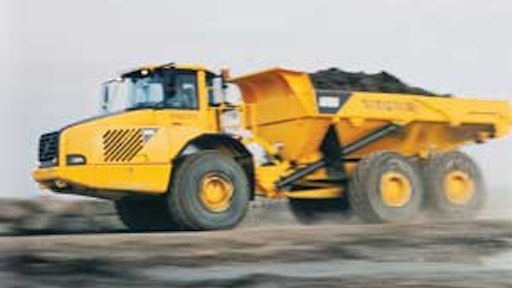 Size excavators to the task

The goal is to maximize the total cycle time. "The fewer passes that are made result in shorter cycle times, which in turn will increase your production," says Brad Van De Veer, field coordinator/senior application consultant, Caterpillar. "If you six pass, you increase cycle times and reduce production. The quicker you can get that truck loaded and on the road, the better — provided you have enough trucks.

"If you're limited on trucks and the excavator is waiting on trucks anyway, you can get away with six passes," says Van De Veer. "It also depends on the haul distance."

There are major downfalls to loading in too few or too many passes. "If loading is under four passes, you have an oversized bucket in proportion to the truck it is loading," says Carl Heggen, product manager, hydraulic excavators, Komatsu America Corp. "Dumping a large amount of material at one time can add more wear and tear to the truck. Under sizing the excavator (in excess of six passes per truck) can result in long-term loss of productivity due to increased total cycle time." This includes the time to load the truck, travel to the dump site, dump the load and return to the loading site.

"If it is taking six passes or more to load a truck, and other trucks are waiting in line, the trucks' total cycle time is unnecessarily increased and productivity will suffer," says Heggen.

The trick is to match the bucket capacity to the truck capacity so you can load in four to six passes. "Expected excavator bucket fill factor and material density must also be taken into account," says Heggen. "If you were running 40-ton trucks and material density is 3,000 lbs./cu. yd., a Komatsu PC800LC-8 with a 6.0-cu.-yd. bucket with 95% bucket fill would load the truck in five passes. If you moved up to a PC1250LC-8 with an 8.5-cu.-yd. bucket at a 95% bucket fill, 40-ton trucks would be loaded in three passes and the excavator would probably be waiting between trucks.

"With material density the same (3,000 lbs./cu. yd.), a PC600LC-8 with a 4.5-cu.-yd. bucket would easily load 30-ton trucks in five passes," says Heggen. "The above is based on excavators equipped with standard boom, short stick and a standard counterweight."

In situations requiring longer reach, a longer boom and arm would need to be installed, with a necessary downsizing of the bucket. "This will increase the number of passes per truck, possibly increasing excavator cycle time, and production will decrease," Heggen says. "Every jobsite has different conditions, so you really want to work closely with your distributor to ensure the best configuration for maximum productivity."

The choice is not always clear cut. "Material density plays a large part in determining the size," says Doucette. "Hard, dense material would require a large excavator, while lighter, less dense material may allow for the use of a smaller excavator.

"In a perfect world, the material density determines the size of the bucket," says Doucette. "A specific excavator can handle a specific load at the end of the attachment (measured in tons). If you require more tons per bucket, you would ideally select a larger machine. In practice, the size of the truck and the desired number of buckets to load it determine the bucket/excavator size."

Caterpillar's 40-ton articulated truck is usually paired with a Caterpillar 345 or 365 excavator, while its 30-ton articulated truck is usually matched to a 330 or 345 excavator. "You need to size the bucket volume to the truck bed," says Van De Veer. Then the density of the material will determine what size excavator it will take to handle the bucket that you have chosen to match the truck bed for the proper four-pass match.

Selecting the best route for a haul road can be a challenge. "Routing of haul roads is a science in itself involving many factors: minimizing haul road length; elimination of severe grades; varying terrain and ground conditions; water table and drainage; overall site safety, etc.," says Heggen. "Generally, the optimum truck route is the one that offers minimal total truck cycle times."

"Theoretically, the best way to lay your haul road is by distance, grade, rolling resistance and ground structure," says Stec.

"One would want to design the closest distance from 'A' to 'B', with 'A' being the loading area and 'B' being the dumping area. If at all possible, keep the grades minimal to help increase cycle times and decrease fuel consumption."

If possible, rolling resistance should be minimized. "If a contractor can help maintain a lower rolling resistance, it will increase his hauler speed and reduce fuel consumption," Stec points out. "Rolling resistance is affected by factors such as type of soil, condition of the ground, moisture content, tire load diameter and width of the wheel."

Rough condition of haul roads, loading sites and dumping sites will slow cycle times. "The operator instinctively adapts the speed to a level that is easier on him/herself or the machine," says Stec.

But haul road maintenance still has its advantages even with articulated trucks. Van De Veer emphasizes the importance of establishing a good hauling pattern with one-way traffic and well-maintained roads. "Well-maintained haul roads will help reduce cycle times and increase production," he states.

He also advises loading the trucks as they are headed toward the dump or fill area. "If you have to turn the truck around, it needs to be when it's empty," he states. "This helps reduce cycle times and wear and tear on the machine and tires."

One of the most efficient methods for positioning the excavator is to build a bench that elevates the machine at a reasonable height above the articulated truck. This will facilitate faster, easier loading.

"The truck pulls parallel to the toe of the slope of the bench and the excavator loads through the tailgate. The truck never has to reverse," Van De Veer explains. "The bench height needs to be about the same height as the bed rail of the truck. But it should never be higher than the length of the excavator stick. The excavator operator needs to reach the ground to clean up debris that has fallen off the truck."

Heggen agrees, adding, "The excavator operator should be able to easily reach the bottom or 'toe' of the bench, with some additional reach available to clean up the debris after the truck pulls away."

He also advises, "Trucks are best presented with the 'drive-by' method where they pull up parallel to the bench face." This will eliminate the need to reverse, allowing for the shortest loading time and fastest exchange of trucks. "This application also gives the excavator operator a more accessible target area to load and excellent downward visibility into the bed of the truck, which further improves cycle time. The operator can also more evenly load the truck, which helps reduce wear on the truck's suspension and tires."

"Let's say each truck's total cycle time is 12 minutes and it takes two minutes to load each truck. You would want six trucks for each excavator to maintain maximum production," says Heggen. "As total truck cycle time increases or decreases, it may be necessary to add or subtract trucks. The main goal is to keep both excavator and trucks moving material with minimum wait time."

The trick is to accurately calculate the average cycle time and the loading time. "An excavator can only load a fixed number of trucks per hour," says Doucette. "Common practice in the construction industry is to use a 50-minute hour, or 83.3% efficiency. The travel time to the dump and empty return time to the loading areas can be calculated or estimated. The time required to dump the material must also be factored in. The sum of these times, in seconds, is the time that the truck is not available to be loaded — meaning this is the time available to load the other trucks.

"With these times, the total number of trucks this excavator can load per 50-minute hour is 35.3 (3,000 seconds per hour/85 seconds loading per truck)," says Doucette. To determine the minimum number of trucks required to keep the operation running continuously, divide the loading time of 85 seconds into the truck turn-around time (900 seconds/85 seconds = 10.6 or 11 trucks).

"However, if we apply the same 50-minute/83.3% efficiency to the trucks, the operation needs 13.2 trucks," says Doucette. "In practice, the operation would probably require 14 or 15 trucks when factors such as machine availability, maintenance, road conditions, personnel, etc., are factored in."

Changes in haul road conditions can also impact the number of trucks required. Consider the case of deteriorating conditions due to weather. "If truck cycle times are becoming longer, [you could] add more trucks to your fleet to keep the excavator running at 100% efficiency and maintain the same hourly production rate," says Heggen.

"But in practice, adding more trucks to compensate for the conditions may not be practical," Doucette cautions. "Parked trucks cost money, and it is unlikely that any operation would simply have trucks sitting waiting to be used in the event that conditions deteriorate. The better solution would be correct maintenance of the road."

Van De Veer agrees, adding, "You need to maintain haul roads rather than add a truck. If you have the haul roads built properly with appropriate drainage, rain won't deteriorate them nearly as much."

[WEBINAR] Major Savings Right At Your Feet: How Small Changes in Your Jobsite Layout and Operations Can Pay Off Big Time