The Pros and Cons of Excavators on Wheels

Weigh the benefits against the potential trade-offs to determine if a wheeled excavator will work on your jobsites. 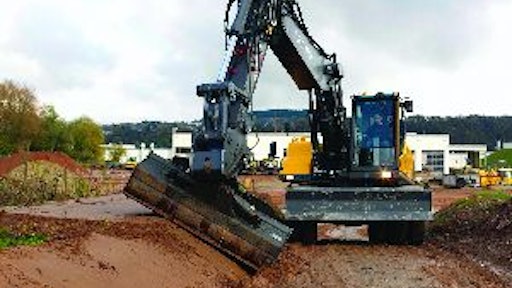 A wheeled excavator can increase productivity in certain applications, such as sloping grades.

While wheeled excavators enjoy a significant market share in Europe, they have yet to break out of niche status in the North American market. Part of the reason is sticker shock.

"Specific advantages relate to being able to perform most of the work of what a crawler excavator will do, but drive from work area to work area," says Matt Hendry, product sales consultant for excavators, John Deere Construction & Forestry.

When comparing tracked vs. wheeled machines, it's important to take into account the applications and terrain in which the excavator will operate. "You lose some digging depth with a wheeled machine because the wheeled undercarriage sits higher than a comparable tracked unit," says Hendry. This also increases the center of gravity. "So an operator will need to use caution as to the degree of slope he works on. Off-road traction will also be less with a wheeled machine."

The large footprint of a tracked machine can be another advantage when digging. "You do have the full path of the track shoes on the ground with a tracked excavator," says Escalante. So of course you have a better footprint on the ground vs. the four stabilizer pads.

Yet, stability is not often an issue with wheeled models. "Operators may have a misconception that the wheeled excavator is unstable when they are digging," Escalante comments. "That is not the case because of how Volvo has designed the machines. And wheeled machine designs have improved tremendously over the past few years."

With the stabilizers down, the digging performance of a typical wheeled excavator will be very similar to a tracked machine. "Regarding the lifting performance, the wheeled machine will lift more because of the stability of the stabilizers," says Hendry. "Also remember that most wheeled machines offer a two-piece hydraulically adjustable boom. By retracting the boom (moving the load center closer to the excavator), you can greatly enhance the lifting capacity of the machine."

"The lifting capacity is definitely there with the stabilizers down," says Chad Ellis, product manager for heavy equipment, Doosan Infracore Construction Equipment. "You gain a little bit of an advantage because of the stabilizer footprint. With the stabilizers down, you don't lose as much lifting capacity over the side as you do on a regular excavator. That is important when you are talking about road work. A tracked machine in most applications can move the tracks around to give you an advantage over the front."

Escalante adds, "If you look at the lifting table, wheeled and tracked excavators are very close. When you put them both side by side, you can do almost the same as far as digging performance." But you gain the versatility and maneuverability with the wheeled machine.

Working on uneven ground can still be a challenge, depending upon the design. "All of our stabilizers are independent so that you can get a good, level footprint," says Ellis. But the size of the stabilizer pads makes it necessary to have solid ground conditions. "It is important to get a solid footing, but the ground being level isn't as important because the stabilizer will move independently to get a level working setup."

Most wheeled excavators come with a choice of a mono-boom or a two-piece boom. "For close-up work, opt for the two-piece boom," says Hendry. "The mono-boom delivers the reach and lift capacity you need for long-distance work."

"The working range with a two-piece boom is superior to that of the mono boom, allowing the machine to navigate around utilities," Escalante asserts. "It also adds more versatility."

For example, a set of forks coupled with a Rototilt attachment can be used to lift pallets to the second story of a building. "If a cleanout bucket is used with a Rototilt, a machine with a two-piece boom will allow the operator to front face the bucket next to the dozer blade and push more dirt in the trench, making for reduced operating time," Escalante points out. "Likewise, a hammer can be operated at all angles without the need to reposition the machine."

Even though the blade is standard, some customers only want the outriggers, says Escalante. But both are recommended.

"[The outriggers and blade] can be used to make work easier on the jobsite and improve the efficiency of the machine," he explains. "You can use the blade as an add-on attachment in addition to any attachment you have on the end of the stick. For example, if you are moving a large-diameter pipe and you have a bucket or a thumb, you can just bring that pipe against the blade and transport it very easily." Simply grab it between the attachment and blade, lift it and transport.

LOOKING TO THE FUTURE

"For those customers just going into business, the wheeled excavator is the most versatile. You can dig like with a tracked excavator and move the wheeled unit around from site to site without having to invest in a truck and trailer," he notes. They are also well suited to urban areas. "For a customer who works in landscaping or a small contractor who is working in subdivisions, the wheeled excavator is the proper machine for use, mainly because you can move it from one place to another without any additional transport unit."

Even so, don't expect wheeled excavators to achieve mainstream status in the near future. "I think [they are] going to maintain their niche market. They are still going to be a staple for municipalities where they can road that machine... They can just travel to where they need to do the utility work or maintenance work without tearing up asphalt," says Ellis. "[Wheeled excavators] may lose a little traction in road construction because of all of the new reduced tailswing machines. With the reduced tailswing machines, you don't have to shut down that extra lane."

But expect wheeled models to become more popular as the population expands. "In very populated areas, like the Eastern U.S., contractors have caught on to wheeled excavators because regulations for transportation of heavy equipment are very strict," says Escalante.