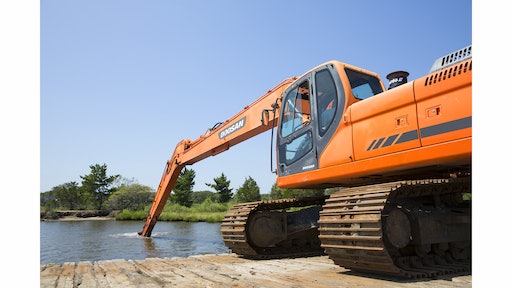 Dredging about 20,000 cu. yds. of material out of Twilight Lake in Ocean County, NJ, was one of the projects that Wickberg Marine Contracting worked on during the summer of 2014. This was a fairly routine job for the multi-generation family business that specializes in dredging waterways throughout New Jersey and adjacent states.

It was routine except that the original plan called for hydraulic dredging and the company switched to the mechanical method, a more cost-effective alternative for the county, says Ted Faxon, Wickberg Marine Contracting general manager. “I contacted the New Jersey Department of Environmental Protection (DEP), explained the job to them and we both agreed it would be impossible to do it hydraulically due to the limited space for the dewatering area,” Faxon says. “We were the only contractor to get permission from the DEP prior to the bid date to mechanically handle the job. We are one of the few firms that are equipped to handle both dredging methodologies. This is an advantage for us.”

Hydraulic dredging typically consists of a cutting head that dislodges the material. Once it’s loose, the sediment is immediately suctioned into a flexible, floating pipe that carries it to a barge or to a dewatering facility on shore.

Mechanical dredging, on the other hand, relies on an excavator — often a long-reach model — mounted on a barge. The excavator uses a bucket to remove the sediment from the water and deposit it on material-handling barges. The barges transport the material to an off-loading site.

Wickberg Marine Contracting used a Doosan super-long-reach excavator situated on a barge to reach through the water and dig down 5 ft., the original bottom of Twilight Lake, to remove excess sediment that had been deposited from a stormwater outfall pipe in the northwest corner of the lake, as well as several thousand cubic yards of sand deposited from Hurricane Sandy in 2012 — the second-costliest hurricane in U.S. history. The goal of the county was to enhance the aquatic use and health of the lake.

Another crawler excavator (a standard reach machine), was positioned on shore to unload the material-handling barges and load trucks to move the sand in order to build a dune system near the community of Mantoloking. Both excavators were purchased from the local Doosan heavy equipment dealer, Hoffman Equipment.

“We usually require a bigger off-loading/dewatering area on shore so we can dump the hydraulically pumped material and let it sit for a while,” Faxon notes. “In this case, we did not have that luxury, so we had to switch to the mechanical method.”

At other times, the excavators are just as valuable as part of the hydraulic dredging process. The assignment to dredge Raritan Bay — located between New York and New Jersey just south of Staten Island — was perfect for Wickberg’s hydraulic equipment.

“While we were pumping the sand onto the beach, we had to build berms to keep the sand from flowing back out into the bay,” Faxon recalls. “One of our excavators, a Doosan DX300LC SLR (super-long reach), dug down into the beach and built retaining berms to create space for the new material. We built a big bowl to keep the sand from flowing back into the bay. As the bowl filled up, our excavator was constantly emptying it to create more room for the sand. The sand coming out of the bowl built up more berms. The long reach was necessary so the excavator and operator were kept out of the spray from the discharge of the pipeline.”

At the conclusion of the project the customer, the Monmouth County Parks Division, not only got a deeper canal but a bigger beach, as well.

Faxon reports that a hydraulic dredging setup can remove about 600 cu. yds. a day from a body of water. The Doosan super-long-reach excavator operated on the Raritan Bay project was more than capable of keeping up with the amount of material the pipeline was depositing on shore.

“The 213-hp excavator, with a reach of 57 ft., is very efficient,” he says. “Dollar for dollar, it’s as good as any similar machine. Our operators like the user-friendly features such as the quiet, comfortable cab with excellent visibility. Fast cycle times, superior fuel efficiency and reliability make the excavator very valuable.”

Wickberg Marine Contracting is headquartered in Belford, NJ, in Monmouth County, and is one of the last family-owned firms in the dredging business. During the past few years, company president Richard Wickberg has overseen a plan that significantly increased business by adding mechanical dredging and jetty construction.

“My background was mechanical dredging, so when I came on board, the company saw a new opportunity and made a big investment in another long-reach excavator, a couple of dozers, an off-road dump truck and additional barges and boats,” Faxon says. “As a result of that commitment by ownership, we are the biggest 'back channel' dredging outfit in the region.”

Working for clients such as the New Jersey DEP, U.S. Army Corps of Engineers, municipalities, townships and marina owners, Wickberg Marine, with 17 employees, has built a multimillion-dollar business that is equally split between mechanical and hydraulic dredging.

“With four dredges, we are the only company in New Jersey that has more than one, and there are only two of those firms,” Faxon points out. “There are not a lot of people who have the experience to get into this business. It’s very expensive — especially buying equipment for the hydraulic process — and when you work on the water, there are many unknowns. That makes people nervous.”

Building rock jetties has also contributed to the growth of Wickberg Marine. While the firm’s long-reach excavators are used at times, when the rocks weigh in the 6- to 8-ton range, the excavator of choice is a Doosan DX340LC crawler excavator. That type of work really increased after Hurricane Sandy, when the company took on several projects where it built rock walls as high as 15 ft. The DX340LC was well-suited for the lifting application with a maximum reach of 34 ft. and a maximum loading height of 22 ft.

“We will do most projects on the water — back channels, not ocean — that our equipment is capable of handling,” Faxon says. “The excavators we have added the past couple of years have helped expand our capabilities and opened the door to more work.”