Company will build a 156,000-sq.-ft. factory in Spartanburg where it will produce standard excavator models for the North American market 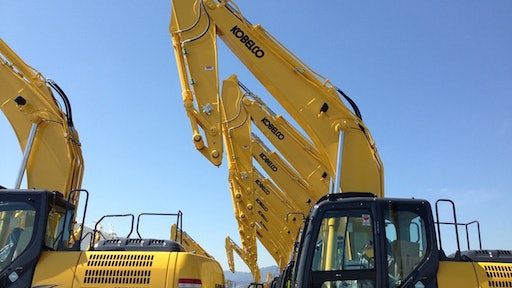 Kobelco Construction Machinery USA announced plan to construct a hydraulic excavator production facility in Spartanburg, SC. The company's market development has been proceeding at a faster rate than expected since its reentry into the US market in 2013. A production factory in North America will allow Kobelco to reduce the production lead-time of machines for its U.S. customers and improve its capabilities for meeting market needs.

Site preparation for the U.S. production facility will begin in April 2015 and is expected to be completed in December 2015. Kobelco’s $41 million investment will involve the development of a 156,000-sq.-ft. production factory, 17,000-sq.-ft. office building, machinery parking and a testing area. The facility will sit on approximately 85 acres of land with space for future production capacity expansion and will have access to major domestic ports, including Charleston, SC, and Savannah, GA.

With an estimated annual capacity of 1,800 units, the U.S. factory will begin mass production in January 2016. Kobelco plans to begin its production with standard machines weighing 20 tons and larger and increase the product line offerings and capacity in accordance with market development. Future production plans at the facility are expected to include most of the company’s excavator models.

“We are very excited to begin a new phase of our growth in North America,” states Pete Morita, President and CEO of Kobelco Construction Machinery USA. “The announcement of our new manufacturing facility follows the move last fall into our much larger and enhanced new North American headquarters and Parts Distribution facility in Katy, TX, as part of our plan for long-term dedication to our dealers and customers.”

By taking full advantage of its U.S. production facility, KOBELCO hopes to further enhance its service functions, reinforce its foundation in the North American market, continue increasing the presence of Kobelco hydraulic excavators and put a group-wide effort into growing its market share in North America. The company has aggressively put forth effort into building its distribution network and has solidified dealer agreements with leading heavy equipment businesses in North and South America.

The development of the North American production factory will reduce the operational burden on the Itsukaichi factory in Hiroshima while also allowing for the reorganization of KOBELCO USA into a company with integrated production and sales, all on US soil. After the production of standard models for the U.S. is transferred to Kobelco USA, the Hiroshima factory is expected to continue maintaining full production in order to accommodate the expansion of newly developed areas, centering on Europe, the Middle East and the Near East.