A Doosan DL380-7 wheel loader will be on display June 8 to 10 in the West Hall at the Las Vegas Convention Center. 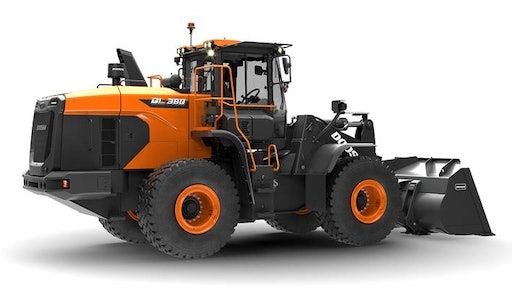 Doosan Infracore North America will showcase a new -7 Series wheel loader at World of Concrete 2021. The DL380-7 wheel loader will be in the company's exhibit (Booth W1302) in the West Hall at the Las Vegas Convention Center, June 8 to 10, 2021.

“The updates in -7 Series wheel loaders are the result of more than a decade of customer feedback,” says Aaron Kleingartner, dealer and product marketing manager. “We are eager to see the excitement the DL380-7 generates at World of Concrete. This is a milestone product launch for Doosan.”

A new look and all-new, redesigned cabs with enhanced comfort features, increased bucket capacities and new fuel-saving technologies are highlights of this next generation of Doosan wheel loaders. Every -5 Series Doosan wheel loader will eventually be replaced by a -7 Series machine — from the DL200-7 to the DL580-7.

The DL380-7 — a replacement for the DL350-5 — features an axle upgrade allowing customers to carry and lift larger load capacities. This increases customers’ capabilities in a variety of traditional earthmoving applications. In addition, a larger standard bucket provides up to 7% larger capacity than the previous model for faster, easier loading to help customers finish their jobs in fewer passes.

The company will also showcase a 14-ton crawler excavator, the 109-hp DX140LC-5. The 14-metric-ton machine is among the most popular excavators in the Doosan lineup, especially for smaller residential site preparation. Its size makes it attractive to contractors who need an excavator larger than a mini-excavator but still want the versatility of a relatively small crawler model.

“The DX140LC-5 and reduced tailswing DX140LCR-5 remain some of our best-selling excavators,” Kleingartner says. “For customers who work in traditional earthmoving applications, the 14-metric-ton machine provides additional dig depth and reach from a slightly larger model than a mini excavator. And the machine’s steel tracks make them appealing for enhanced traction and added stability when used for lifting applications.”

The excavator has a maximum digging depth of 20 ft. 1 in. and a maximum reach of 27 ft. 11 in. A rear view camera comes standard and a side view camera is an option. Operators can see both views with the split-screen mode on the display inside the cab.