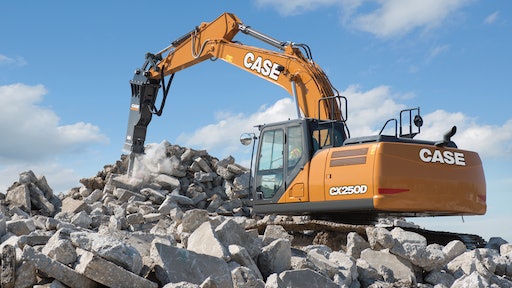 Case claims significant performance and efficiency gains for its new D Series excavators: up to 12% faster cycle times thanks to an electronically controlled hydraulic pump, and up to 14% greater fuel efficiency resulting from the smart hydraulic system combined with selective catalytic reduction to certify the diesel engines to EPA Tier 4 Final emissions limits.

Breakout forces are increased by as much as 6%. Productivity testing during research and development showed that certain models in the D Series could fill more than 9,500 additional trucks per year based on cycle time increases alone.

The Case Intelligent Hydraulic System adds a larger control valve and multiple sensors to the electronically controlled pump. Four integrated control systems make the best use of the machine’s hydraulic power and momentum to improve cycle times and add strength and fuel efficiency.

The four systems that make up the Case Intelligent Hydraulic System are:

Using improvements to the Spool Stroke Control system, D Series excavators re-use hydraulic fluid that would normally be returning to tank whenever possible. This automatically speeds cycle times while reducing engine load, for greater efficiency. The operator works more efficiently even while experiencing a more productive machine without loss of precise control.

The D Series also provides the operator with three working modes – Speed Priority, Heavy and Automatic – that help the machine conserve energy and exert only as much power as needed to complete the job at hand.

An optional LED working light package for the D Series excavators illuminates similar to sunlight – more than three times brighter than halogens. The LED package includes six lights (two front, two rear and one on each side) and a side-view camera. A premium LED light package features the Case Maximum View monitor, which combines feeds from three cameras to provide a comprehensive view to the rear and both sides of the machine.