The new look of soil stabilization 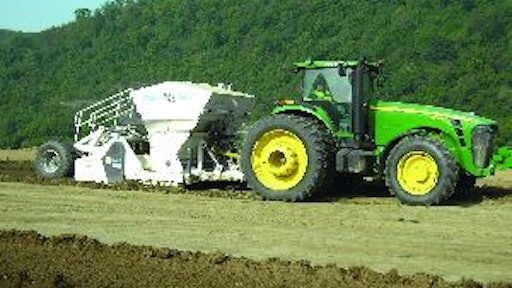 With the SBF 24-6 dust-free stabilizer, Kokosin Construction is able to meet the dust-free specs required for the Marmet Locks and Dam Project.

Soil stabilization is taking on a new look with the availability of Stehr soil stabilization attachments in the United States. With products such as standard and dust-free stabilization grinders and bonding agent spreaders that mount to the front and rear of agricultural tractors, contractors have an economical alternative to self-propelled equipment. As a result, they can readily use native soils in stabilization projects.

These attachments offer a range of additional advantages, including reducing fuel costs; avoiding unwanted compaction caused by driving over processed material; greater maneuverability; and ease of transport. Plus, the tractor is available for other jobs once a soil stabilization project is finished.

Until recently, there have not been any tractors that could move slowly enough to work with the stabilizer attachments. But now, JCB, Fendt, John Deere, Massey Ferguson, Case and Landini all offer tractors with the horsepower and creep speeds needed to handle the task. And with three attachment sizes available, you can stabilize soil at depths down to nearly 2 feet and widths up to 8 feet.

More capacity for less
Several contractors across the country are realizing the advantages these attachments provide.

In March, the company purchased a Stehr SBF 24-6 dust-free stabilizer, which is a combination of an SBF 24 stabilizer and a 9-cubic-yard spreader attached in tandem for spreading the binding agent. Acquired through Mountain Valley Equipment, Grand Junction, CO, the system is mounted onto a John Deere 8530 tractor.

The attachment is currently being used on an Army Corps of Engineers project in Belle, WV, where Kokosing is working in conjunction with Fru-Con, based in St. Louis, MO, to expand the Marmet Locks and Dam on the Kanawha River. Per Corps specs, all excavated material must remain on site, says Tony Raubenault, Kokosing's master mechanic. And per EPA regulations, all stabilization has to be accomplished dust-free.

Initially, the plan called for a subcontractor to handle all of the stabilization work. However, the sub wasn't able to accommodate the dust-free specs, so Kokosing purchased a dedicated stabilizer unit. "But then we saw a need for another stabilizer to meet production needs," says Raubenault. "That's when we purchased the Stehr attachment. Both pieces of equipment are still on the jobsite."

Kokosing opted for a stabilizer attachment rather than a second dedicated unit largely due to the ease of mobility and the considerably lower cost ? less than $200,000 for the attachment (not including tractor costs), compared to about $600,000 for a second dedicated stabilizer. "And when we're finished with this project, we can use the tractor for other applications," says Raubenault. "Using an attachment rather than a dedicated machine lowers our operational costs."

It also allows the contractor to stay on task and save time. "We stabilize the soil on our embankment area," Raubenault explains. "Without the stabilization

equipment, we could only move dirt about two days out of the week, since it takes about a week to dry it naturally. With stabilization, we can mix in hydrated lime, till it in with the attachment and pour our next lift the following day, and still meet the core specs.

"This attachment has been a great addition to our stabilizing operations," he adds.

The SBF 24-6 is set up for approximately 250 hp, which allows for soil stabilization on a variety of projects, including haul roads, building pads, structural fill areas, etc. It includes a 9-cubic-yard spreader attachment that minimizes dust, eliminates a separate spreader truck and places the lime/cement in the desired location in the soil. The attachment also allows the tractor unit to be utilized for other functions while the stabilizer is not in use, which can be an advantage over a dedicated stabilizer machine.

Beaver Excavating is currently using the SBF 24-6 to aid in the installation of recompacted soil liner at Republic Waste's Countywide RDF (Recycling & Disposal Facility) in Bolivar, OH. During construction of the last three cells, Beaver has excavated more than 5 million cubic yards of earth and installed 53 acres of re-compacted soil liner, totaling more than 250,000 cubic yards.

The Stehr stabilizer is being used on this site for soil particle sizing of the recompacted soil liner. The Ohio Environmental Protection Agency regulations require that no particle sizes be greater than 2 inches and no clod sizes be larger than 3 inches for this material. One pass with the stabilizer through the loose lift of material prior to compaction ensures these requirements are met.

Quicker setup
Steve Casano, Stabl-Eze, Grand Junction, CO, just took delivery of two Stehr attachments: an SBF 24L stabilizer that mounts to the rear of a John Deere 7810 tractor, and an SBS 3000 spreader for the front of the tractor. The attachments enable the contractor to enter the soil stabilization arena at a lower cost than purchasing a dedicated machine. Because they provide stabilization down to 15 inches deep, Casano doesn't need a larger, heavier, dedicated unit that is more costly to operate and transport.

In addition to soil stabilization work, Stabl-Eze is the North American distributor for InfraCrete, a binding material that allows for the stabilization of soil for road and motorway construction, runway construction, oil field roads and pads, parking lots, footpaths and cycle paths, among other uses. Adding the binding agent to cement allows the hydration to occur even in high-sulfate soils. This is an alternative to aggregates in the native soils of Colorado, where the composition is mostly clay and rocky.

"The product is also waterproof and frost resistant, and it produces high-tensile strength and is strong in compression and elasticity to withstand the vibrations from heavy truck traffic," Casano says. "In conjunction with the Stehr attachments, with this setup, I can move the equipment myself, with a much quicker set-up time. I simply unload it and go to work. It can cut off one-half to two-thirds of the amount of time it takes to build a road."

Because of the success Casano has experienced with the stabilization attachments, he will be seeking a second larger unit.

Soil stabilization is proving to be the optimum solution whenever the properties of soil have to be altered to make it suitable for further roadworks
January 7, 2019

Wirtgen soil stabilizers and Hamm rollers teamed to create the load-bearing base for the nearly 77-acre site
July 30, 2018

Sort your vehicle tracking with Quartix. || Save on fuel and maintenance , increase productivity, and protect your team. || Speak to our team to find out more.
September 1, 2020