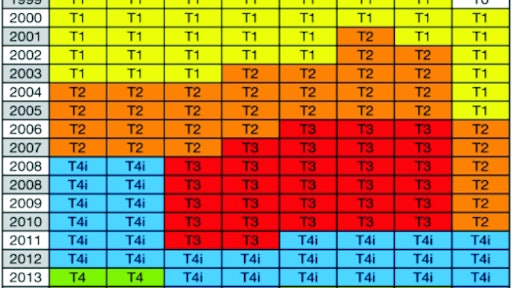 U.S. EPA's off-road diesel emissions limits are phased in using the eight horsepower groups shown across the top line of this table. Under-75-hp engines had to meet Tier 4 final limits as of the first of 2013, and all engines must comply with Tier 4 final by 2015.

The U.S. Environmental Protection Agency is a product of the Clean Air Act, which requires the agency to monitor air quality and eliminate threats to human health.

Two major components of diesel exhaust lead to the EPA's regulating diesel emissions. Oxides of nitrogen (NOx) combine with ground-level ozone and other pollutants to form smog, and particulate matter (PM), or soot, has been found to be a serious lung irritant and potential carcinogen.

EPA chose to regulate diesel engine emissions at the manufacturing, requiring new engines be certified to restricted levels of NOx and PM. But when the regulations were being crafted, there wasn't a clear technology path to achieve the final target level of emissions. So the regulation phased in gradually decreasing allowable levels of NOx and PM called "Tiers" starting in 1996 and completing in 2015.

Considering the broad range of diesel engine sizes, the Tiers were prescribed for specific horsepower ranges to spread out the development workload and cost for regulated manufacturers. The result is a matrix of dates, horsepower ranges, and emissions levels spreading back to 1996.

At the first of 2011, all new diesel engines had to be certified to EPA's Tier 4 Interim exhaust standard except those from 75 to 174 hp. Manufacturers can use any technology to meet the emissions standards. Most will apply cooled exhaust gas recirculation and diesel particulate filters to larger engines, although some have already begun using selective catalytic reduction alone, with its diesel exhaust fluid requirement. To satisfy Tier 4 final, most mid- and large-displacement diesels are expected to have SCR.