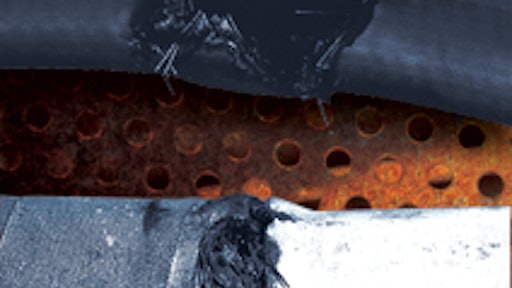 Hydraulic hoses convey liquids under extremely high amounts of pressure. When compromised, they can cause everything from burns, fires and explosions to electrical shock, fluid injections under the skin and even death.

"A lot of people may not understand the danger of hydraulics under pressure," says Scott Kane, regional sales manager for Parker Hannifin. "There is a tremendous amount of energy that is released if a hose bursts or a fitting comes apart. People who work around hydraulics every day can become desensitized to the hazards. But hydraulics can be dangerous and should be respected."

Dave Pooley, national service manager at Hyundai, recalls an incident where a mechanic was checking for an oil leak with his bare hand. "He couldn't see the wet spot, so he was using his hand to feel for it," he says. "He didn't know there was a small hole with oil leaking out at 5,000 psi. The oil penetrated his finger. Today, 12 months later, his finger is the size of a Coke can and he has to make the decision about whether or not to amputate it. In the end, he may lose not only his finger, but his whole hand. Whenever you do anything with hydraulics, you need to put safety first."

What to look for

Safety starts with knowing — and implementing — the proper procedures for inspecting hydraulic hoses. At the very minimum, wear safety glasses and gloves, though Kane indicates even heavy work gloves won't protect you from leaks at extremely high pressures. "Don't put any part of your body where you suspect a hydraulic leak," he emphasizes.

If you want to inspect a hose assembly while the machine is operating, use a clean, thick object or, better yet, sheet metal as a detection device. If you identify a leak, shut down the machine before loosening or removing any hoses or fittings. If you're using an attachment, lower it to the ground to remove any stress on the cylinders. Also shut down the machine if you intend to take apart a valve or inspect a cylinder or pump.

According to a technical report by the International Organization for Standardization, there are several areas to monitor when inspecting hydraulic hoses and assemblies. If any of these conditions exist, the hose assemblies should be evaluated for correction or replacement.

Where abrasion is unavoidable, consider abrasion-resistant hoses and hose guards, says Mike Watts, marketing manager for Goodyear's hydraulic hose program. "We offer severe application hoses that are manufactured with a protective coat to offer abrasion resistance over standard rubber-covered hose," he says. "Or you can utilize a nylon sleeve or plastic wrap to offer added protection against abrasion, heat, slag, weld spatter and other harsh environmental conditions."

"Proper routing is an area where you can make a hose last longer or wear faster," notes Mike McGreevy, application engineer at Parker Hannifin. "If the material is stressed for whatever reason — due to a twist, strain or excessive bend — the inner tube can tear apart, and like anything that bends too far, it will eventually break."

It is important to consider both internal and external temperatures, as well as routing. "The outer cover can be damaged by routing a hose too close to a hot manifold," Watts says. "Cracking of the hose compounds is caused by the plasticizers leaching out when you exceed compound design temperature."

In high-heat applications, use a special hose or a cover. "Most 'vanilla' hoses are rated to about 200° F for fluid temperatures inside the hose, as well as the ambient temperature outside the hose," says Kane. "It's a good idea to keep the hydraulic system operating under 150° F. At temperatures above that, you'll not only have problems with hoses, but also O-rings, seals, etc."

Cracking can also be caused by age. "Rubber has a limited shelf life," says Pooley. He suggests changing hoses every three to four years, regardless of their condition. "During normal work and operation, there is a lot of stress and strain on a hydraulic system. The hose is what takes the brunt of it. It will wear internally and externally from weather, application, movement and, of course, pressurization. There is a point in time when a hose has reached the end of its useful life. By switching out hoses on a timely basis, you can divert a lot of dangerous problems that could occur."

A soft, spongy cover can indicate chemical incompatibility. "Hoses are designed to work with a particular type of fluid," Kane explains. "If you use the wrong one, or if the wrong fluid splashes on the outside of the hose, it will attack the rubber and the hose should be replaced."

Pay particular attention to hoses when working in extreme conditions, such as demolition or brush clearing. "There is a lot of debris falling and flying around in these applications," Pooley says. "It's important to be aware of the environment you're working in."

If damage is detected, it's better to be safe than sorry. "Any time you have concerns about assembly integrity because of potential damage, it should be replaced," Wren states. "Downtime on the jobsite is much more costly than replacing the assembly during your routine inspection."