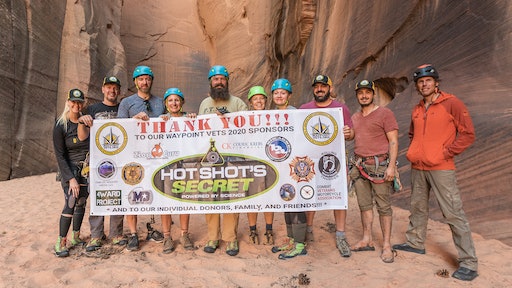 Hot Shot's Secret president Chris Gabrelcik met with Army veteran Sarah Lee, who last year not only bicycled across America meeting with veteran groups along the way to raise awareness for the overwhelmingly high suicide rate of Army veterans but was inspired to form her 501 (c) (3) non-profit Waypoint Vets, an organization designed to unite and empower veterans through activities and adventure. The cost is covered for veterans who participate. Waypoint Vets plans the adventures and takes care of the travel, meals, lodging, and most gear, and organizes a variety of activities to accommodate a wide range of fitness levels.

Gabrelcik was captivated by Lee's passion and the goals of her non-profit and donated $10,000 to cover the cost for the first Canyoneering adventure held in late October that allowed nine vets to participate in this inaugural trip.

During their recent meeting,  Gabrelcik and Lee had an intense discussion of what can be done about veteran and human issues, and what her plans were to curb the suicide rate and the divisiveness among the Veteran Community. Lee said, “At the end of the meeting, he stuck a post-it note on my 501(c)(3) that simply read, "Fix It." with his personal cell phone. Mr. Gabrelcik committed to supporting Waypoint Vets in that moment, and then followed through to make our first adventure possible.”

Lee said of her first outing, "The canyoneering adventure was better than I ever imagined possible. We took veterans from three military branches and six states on a five-day Utah wilderness adventure. Our very first rappel into the canyon was 200 freaking feet! Watching these veterans bond and push each other and themselves was beautiful and powerful. It was exactly what I'd hoped and envisioned for Waypoint Vets, and now the vision has officially become a reality. I cannot thank Hot Shot's Secret enough for their support and allowing my first Waypoint adventure to be even more than I envisioned."

Lee further elaborated on what exactly created the inspiration to form Waypoint Vets by sharing: “Throughout my 4,000-mile cycling journey across the United States, I was gifted three truths. Veterans will never stop being mentally and physically capable of great things, America is not as divided as we may think, and we must Honor the Sacrifice of our Fallen by Living and Giving. The healing and clarity I received while immersed in our nation saved my life, and I am adamant about making a real difference for my fellow Veterans going forward. Facilitating opportunities for peace, camaraderie, and adventure is our focus.”

Lee is extremely grateful to Gabrelcik and Hot Shot's Secret for making her very first Veteran Adventure possible. When looking to the future, she added, “Next year, Waypoint Vets will be going from one National Adventure to five; to include Canyoneering near Zion, UT, Storm Chasing in the Midwest, a Kayaking / Mountaineering Excursion at Lake Powell, AZ, a Women Veteran's Retreat in Destin, FL, and Cycling the Summit of Monarch Pass in the Rocky Mountains. This is only the beginning."

Suicide Prevention in the Workplace

Cat® Wheel Loaders are purpose-built and technology-equipped for your work.
February 1, 2021

The AED Foundation distributes more than 4,800 technical tests, that help dealers ensure they are hiring qualified applicants that fit their dealership’s needs, since 2015.
AED Foundation
January 6, 2021
Follow Us