Staying a Step Ahead with RAS 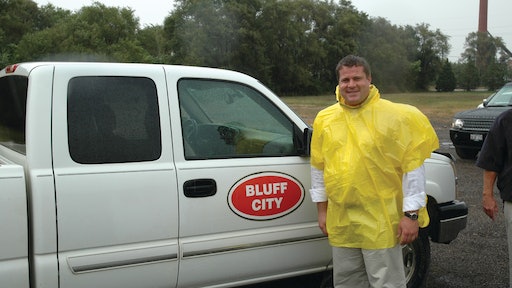 Bluff City Materials, based in Barlett, Illinois, has a long history in the Chicago market. “We started in underground construction, including putting utilities in the ground,” says Matt Vondra, Vice President, Bluff City Materials. “Our company evolved into construction materials recycling and excavation. It then dovetailed into mining and mine reclamation work.

“Today Bluff City Materials is a mining and recycling business,” says Vondra. The company operates recycling and construction materials handling facilities in and around the city of Chicago. “This is how we grew into Recycled Asphalt Shingles [RAS],” he adds. “We have an asphalt plant and were trying to make the most economical hot-mix asphalt. With our experience in recycling, we decided to partake in a joint venture recycling asphalt shingles.” This joint venture resulted in Southwind RAS, LLC.

Besides the economic benefits, there is a tremendous environmental benefit to RAS. “The number of times it reduces the carbon footprint is a quadratic equation,” explains Vondra.

When shingles are added to asphalt, it reduces the cost and saves on oil. Prior to the formation of Southwind RAS, there were virtually no applications of RAS in the state. “Illinois was an underdeveloped market for recycled asphalt shingles,” says Vondra. “So we tried to stay a step ahead of the market.”

The first step was for RAS to be written into the Illinois Department of Transportation (IDOT) spec. After a concerted effort, this was accomplished in October. “By the beginning of paving next year, we will be in all of the specs from Chicago through the central Illinois state districts,” says Vondra.

Early pilot projects helped. “The first was about 18 months ago,” says Vondra. It was the first time the contractor had used RAS mix, and it was the first time the RAS mix had been placed in the city of Elgin. Since this was a first attempt, there was a learning curve, but the final product is holding up. “There is a little reflective cracking, but it was a learning process,” he notes.

Going forward, Illinois developed many incentives that encourage continued growth of the RAS mix, including a recycling law that increases the amount of credit that people receive for recycling shingles. It also advocates IDOT to use warm-mix asphalt, which secures the most economical mix for both contractors and taxpayers.

On another recent project, warm mix was transported about an hour and 20 minutes to a site located 50 miles from the plant. The whole site was paved with RAS warm mix and the base materials were recycled from the Eisenhower Expressway.

In order to produce RAS mix, a steady supply of shingles is necessary. In the early days this came from shingle manufacturers. “RAS started with manufacturer scrap,” explains Vondra, “but because of the limited volume of manufacturer scrap, we decided on the tear-off side of the business, which is more complicated.”

Shingles from reroofing projects are delivered to processing centers. Customers pay a fee to deliver shingles to Southwind RAS. “We charge disposal fees,” explains Vondra. “Essentially customers pay us instead of a landfill. The fees are less than half those at a landfill and customers don’t have to pay environmental assessments.”

The fees help offset the cost of processing the shingles. “It is a capital intensive business,” says Vondra. The company has invested in five facilities around Chicago with five additional facilities in Rockford and Peoria.

Before the shingles can be used, they must be tested for quality and the presence of asbestos. Southwind RAS tests for Asbestos Containing Material (ACM), using an independent National Institute of Standards and Technology (NIST) accredited lab and several third-party, DOT-certified aggregate testing labs.

Asbestos has not yet posed a problem. “An Illinois Department of Public Health certified inspector examines inbound loads and takes representative samples. Those samples are sent to a lab before the shingles are incorporated into our feed material. We have not had one detection of asbestos,” he says.

Shingles also need to be cleaned prior to processing and there is income potential in this process. “The nails are almost more valuable than the oil,” says Vondra. “A special magnet is required to pull them out, and those nails are recycled for several hundred dollars a ton.”

Not all contaminants can be removed as easily. Sorting shingles is a laborious process. “An employee must stand next to a conveyor belt removing plastic, wood and anything that is not roofing,” says Vondra.

There is the expense of grinding the shingles. The company’s RG-I Rotochopper shingle grinders, powered by Caterpillar engines, are custom-made for grinding shingles. This keeps the RAS in spec and ensures a consistent gradation. The abrasive nature of the shingles creates a lot of wear on the grinder, and maintenance is something that must be performed regularly.

In addition, the stockpiles of material must be worked over (Southwind RAS uses Caterpillar loaders) prior to loading in the grinders to prevent clumping of the shingles.

As the state begins to use the new mix spec, the future for RAS mix in Illinois looks bright. One high-profile project already on the board is the “Green Mile” in the city of Chicago. “In addition, the state plans to use RAS on the resurfacing of Michigan Avenue,” says Vondra.

The mix is called Stone Matrix Asphalt (SMA) which is an 80% course and 20% fine mix. This will be mixed with the RAS. “It is a technology used frequently in Europe,” he explains. “It’s quieter, more stable and very durable. It has many good properties to it, including being high friction and high loading.”

The prospects for other paving projects also look promising. “Now that we are a little past the learning curve, people are becoming more interested in using RAS mix as opposed to a pilot project,” he notes. “The day-to-day use has really started to pick up.”

DOING THE MATH ON RAS

There are many inherent advantages to RAS mixes including enhanced stability, increased wear resistance and faster paving with fewer compaction efforts.

Recycling a ton of shingles replaces roughly two barrels of oil. “Simple math on this product is that it has about 25% oil. A ton of liquid asphalt is approximately $400 to $500 so the oil in the shingle is worth more than $100 per ton,” says Vondra.

The customer is buying our product for less than $50 a ton. If their benefit is $50 per ton and it is used at 5% in the hot-mix, it comes to a savings of $2.50 a ton to use RAS. What they would normally be spending on their oil is where they save money.”

But that doesn’t take into account the benefit of the cellulose fibers and the sand in the shingles. “It is surprising how much sand is in a shingle,” he says. “It’s about 40% sand,” says Vondra. “Shingles are made to last 30 years on a roof. High-quality sand is used which adds to the density of the mix and the quality of the pavement.”

Then there are the cellulose fibers. “Adding cellulose fiber is very expensive, but the fibers definitely add to the stability of the mix and reduce drain down.”

The potential savings in oil and landfill space are staggering. Eleven million tons of shingles are sent to landfills annually, where they remain for 300 years. The average home reroofing project generates one to three tons of shingles.

RAS mix can save a lot of money and benefit the environment, but an understanding of the product and its application is necessary to circumvent potential problems.

“To counteract the stiffer oil from the shingles, a softer oil is necessary to prevent reflective cracking. This softer oil may be slightly more expensive.”

Special precautions should also be taken when laying the mix. The mix needs to be quickly worked behind the paver. “The finish roller operator can’t be lazy because the mix will get stiff if not monitored; it can’t cool off. Hand work has to be spot-on but the benefits seem to outweigh any drawbacks.”

In order to collect enough shingles to justify a recycling effort and the associated investment in specialized equipment, you need to be near an urban environment. “It is a population-based statistic,” explains Vondra. “We have not had any issues in Chicago finding the number of shingles required. Peoria has been a little slow, but we also have some pretty high competitive pressures from the landfills. It is a little cheaper [in Peoria vs. Chicago] to dispose of shingles in a landfill, plus the landfills are all closer.”

It also has a lot to do with convenience. “In Chicago, the nearest landfill is probably 120 miles outside the city,” says Vondra. “In Peoria we drive 15 minutes and are at the landfill. So we basically compete with landfills. Everybody is used to going to the landfills so we advertise on the roadways on the way to the landfill.”

However, supply is simply a numbers game. “It’s a pretty stable business because of the way roofing shingles wear,” he notes. “Almost all houses have asphalt roofing shingles. As they are going on, they are coming off. For every 30,000 people, there is a certain number of roofs that will come off every year.

“Last year in Chicago we recycled about 40,000 roofs,” Vondra recalls. “We have recycled about 1,200 roofs in Peoria.” Two shingle grinders currently handle this workload. One is dedicated to Chicago. The other is stationed in Rockford and is moved to Peoria after enough material has been accumulated to grind. (See video.)

The asphalt plant side of the business also requires a critical mass before it makes economic sense to produce the mix. “A high level of RAS business justifies expenditures on the plant side like the installation of additional feed bins,” says Vondra.

“When putting the mix through the plant, other aggregates should always be added,” notes Vondra. “For example, when RAS is put through the plant during a windy day, a lot of it won’t make it into the plant, which can throw off the mix if you’re not careful.”