Don't let your ginder eat away at your profits. 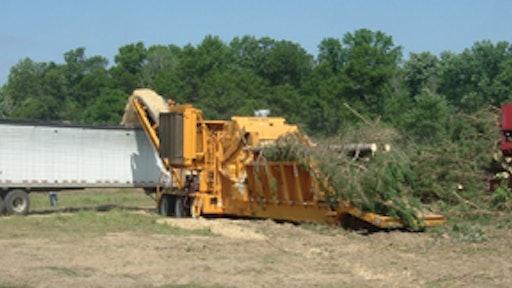 Grinders represent a significant investment, so its tempting to squeeze every last hour you possibly can out of them each day. But maintenance shortcuts can end up costing you dearly in the long run.

T&W Grinding & Compost Services, New Delhi, IA, grinds for general contractors doing land clearing, as well as municipalities, producing compost. It has avoided costly repairs and downtime through a daily maintenance routine. "You can't work them day in and day out, put them to bed and not look at them," says Lee Wilson. "You have to take care of them."

"Many new owners and operators to the grinder industry believe they can just start up the machine in the morning, start throwing materials in it all day long, shut it down at night, go home, come back the next day and start all over again," says Mike Byram, Vermeer Mfg. "Grinders are tough machines but you are beating material apart. That's why they are maintenance-intensive machines.

"Operators should have a regular maintenance schedule where they are shutting down prior to the end of the work day, cleaning the machine, greasing and changing cutters that need to be changed," advises Byram. Even check the torque on cutter bolts at mid-day. "If a cutter is lost, it can damage the machine and shorten hammer life." Service maintenance schedules are included in the operator's and maintenance manuals.

"Pre-screening your feedstock to minimize soil and rocks will have a dramatic impact on reducing wear," says Dave Benton, Peterson Corp.

This requires the operator to pay careful attention. "If your operator is good, he can spot a piece of steel or a big rock and he will pull it out and set it aside," says Dan Brandon, marketing manager, Morbark Inc.

In some cases, a self-propelled track machine can actually help reduce the level of contaminants entering the system. "If you are dragging material through the mud and dirt to a staging area, you are going to pick up a lot of contamination," says Brandon.

"Many of our guys are going to track machines now so they don't have to skid that stuff out. They take the grinder to wherever the pile is and grind it right there."

No matter how carefully you pre-screen material, there is always the possibility that an unintended foreign object will get in the grinder.

T&W Grinding & Compost Services recalls an instance when a large piece of steel inadvertently found its way into the infeed of its trailer-mounted Morbark 4600 horizontal grinder. "It must have been 2 1/2 or 3 in. square and a foot long," says Wilson. "It sheared off one of the hammers and popped the torque limiter.

"That was no fault of the machine," he adds. "It did what it was supposed to do. As far as getting it reset, that was no problem — just a new hammer and we were ready to go again. I don't imagine that we were down 25 minutes."

All grinders have some type of torque-limiting protection to prevent shock loads from damaging the drive system. Some systems require grease, and some need to be checked for proper operation on a regular basis. External friction-style torque limiters tend to freeze up if not used periodically. There are also systems that are integral to the clutch, running in the same oil bath, which minimizes maintenance. "Whenever you can take the requirement that the operator has to maintain it out of the picture, it makes it a lot more reliable long term," says Byram.

Grinders can also experience shock loads during startup. "The manually engaged over-center clutch has been around for many years," says Brandon. "We still have customers that ask for them. We do put them on machines, but we are seeing a trend toward the hydraulic clutch.

"With the old over-center clutch, you really have to be on your toes," he explains. "You can burn up a clutch in a hurry if you have an operator who doesn't pay attention to proper procedures. If you have 1,000 hp and try to jam that hammermill into gear a little quicker than you should, bad things can happen."

The hydraulic clutch takes operator skill out of the startup equation. "You push a button and it engages," says Brandon. In addition, the hydraulic clutch eliminates the regular setting and maintenance required by the over-center clutch.

"If you watch a grinder run, after a couple of hours, depending upon which way the wind is blowing, the radiator screen will start to fill up with stuff," says Brandon.

The physical size of the radiator screens influence how fast they begin to plug. "We utilize a screen that has a ‘waffled' profile, which increases the available air intake surface," says Peterson's Benton.

Reversing fans have become popular on many large grinders. "The cooling fan is powered by a hydraulic motor, which periodically reverses to purge material that has collected on the radiator screen," says Benton.

These fans reduce the need to crawl around the radiator screen and blow it out with an air compressor. In some cases, there is a button that can be pushed to manually reverse the direction of the fan and purge debris. Other systems, such as the one from Peterson, purge debris automatically. "The fan motor is controlled by a system that is monitoring all of the operating parameters," says Benton.

"In general, the most common wear items are going to be your cutter teeth and your screens," says Byram. "Obviously, that is where your work is being done."

T&W Grinding & Compost Services recognizes the importance of frequent inspections. The hammermill is inspected daily. "We just stop a little earlier and take care of it at the end of the day," says Wilson. "We check all of the belts and conveyors. We are inspecting the teeth at noon and in the evening to make sure they are tight. Naturally, you check the oil in your engine, water levels and that sort of thing. We keep a good eye on everything."

As a result, the company has experienced no problems with its grinder in the past two years of service. And by handling maintenance and inspections every evening, the company shows up at the jobsite ready to work. "We don't want to mess around the next day getting started," says Wilson. "We like to pull in and go to work right off the bat."

Brandon says contractors with good maintenance programs will even bring their grinders into the shop on a bi-weekly or monthly basis. "They look for cracks and any signs that bearings are getting hot. A lot of guys even carry heat guns to see if there is any heat coming out of a bearing where it shouldn't be," he points out. "It is just attention to detail all of the time."

If a problem is suspected, never continue to operate the grinder. "If something malfunctions on the machine, the operator should shut it down immediately and make the necessary repairs rather than trying to continue the run," says Morey. "Keeping the waste reduction machine in tip-top condition is essential in minimizing operating costs and extending machine life."

Many machines turn the mills at high speeds. "If you break a hammer off, it will get out of balance," says Brandon. "A good, experienced operator will feel that. Something just doesn't sound or feel the same."

Drum balance is important for proper operation. "On a high-speed, rotating piece of equipment, vibration is always an issue," says Byram. Consequently, on some drums, when you replace a hammer on one side, you need to replace the hammer on the other side, as well. In addition, you must be careful to maintain balance when welding on a drum.

It may be tempting to try to reduce material into a final product in one pass. You may think you are saving time by avoiding a screen change and regrind time. But that is not how it actually works.

"The people who are ‘in the know' try to get their final product in two cuts rather than one," says Wilson. "It makes a better product. You get a more even cut and it works the equipment less. We have also found there is better production out of it that way. If you are trying to pound too much stuff through a small hole, it just doesn't work well."

Based on the company's vast experience with its Beast Recyclers, Jerry Morey at Bandit Industries provides a list of the top five maintenance items:

This all-rounder shreds even difficult materials including concrete, wood, and more with its robust design and powerful engine.
Komplet North America
January 21, 2020

Over 50 students from 32 companies across the U.S. and Canada gathered at Rotochopper’s manufacturing facility in St. Martin, MN for training the last two weeks of February.
Rotochopper Inc.
March 18, 2019

Attendees had the opportunity to see Rotochopper grinders in every stage of manufacturing, from cutting to final inspection and testing
Rotochopper Inc.
September 24, 2018

Morbark's 3400XT Wood Hog horizontal grinder has a standard width of 8 ft. 4 in. making it within the legal transport width no matter what engine is used
Morbark, LLC
March 7, 2017

Recycling Cuts Away at Costs

A recycling plan tailored to your territory and jobsites can save on tipping fees and material costs.
Curt Bennink
April 12, 2013

B-66 with Asphalt Shingle Grinding Package

This safety video from Vermeer will cover site preparation, machine prep and machine operation, which are all keys to safe tub grinder operation.
July 9, 2012

As roads continue to fail and budgets become increasingly tight, cities, counties and states must look for alternatives to maintaining their roads. FMG, located in San Jose, CA, is one contractor utilizing a green and sustainable method to preserving roads. The cold foam in-place recycling method was used by FMG in the Monterey Road project for the City of San Jose.
May 1, 2012