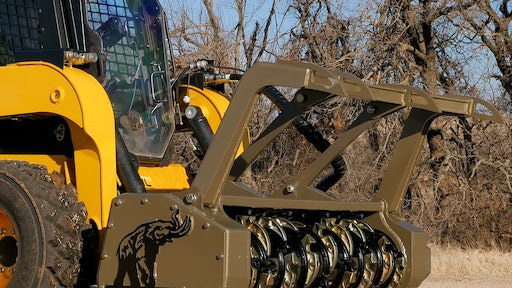 The Mastodon M60-S has a 60-in. cut and utilizes an ECU to shift its 160cc motor for optimum performance.
Dougherty Forestry Mfg.

Hinton, OK-based Dougherty Forestry Mfg. was founded in 2003 to serve the land clearing, forestry and mulching markets. The company is accustomed to dealing with the challenges of custom cutters. One of the company’s competitive advantages was that it offered a mulcher with a direct drive train instead of a belt and pulley.

But a couple of years ago the company recognized a major technology shift was occurring across the equipment industry and decided it was time to set off in different direction with a revolutionary new line of mulching products. “A couple of years ago we stepped back from the industry and took a hard look at where the market was headed and developed these products to get ahead of the curve,” says Patrick Dougherty, CEO of Dougherty Mfg. “We made some major investments in new technologies and the Mastodon line of forestry mulchers have some never-before-seen features like Electronic Control Unit (ECU) controlled shifting, lift assist, hour and temp monitoring and in-field smartphone tuning with Bluetooth. We feel these features future proof our client’s investment and makes certain their operations are competitive now and into the future.”

Two-speed mulchers with variable-displacement motors have traditionally used a hydraulic pilot signal to determine when to shift, or change displacement. “Generally, the way a two-speed mulcher works is you have to have a pilot signal go to the solenoid and mechanically move the displacement of the motor,” says Dougherty. During operation, the flow and pressures change as you feed the mulcher into the material which results in pressure spikes. “It's a pretty intense situation for a hydraulic circuit. So using a pilot signal to shift leads to some very interesting phenomenon. It is not ideal.” 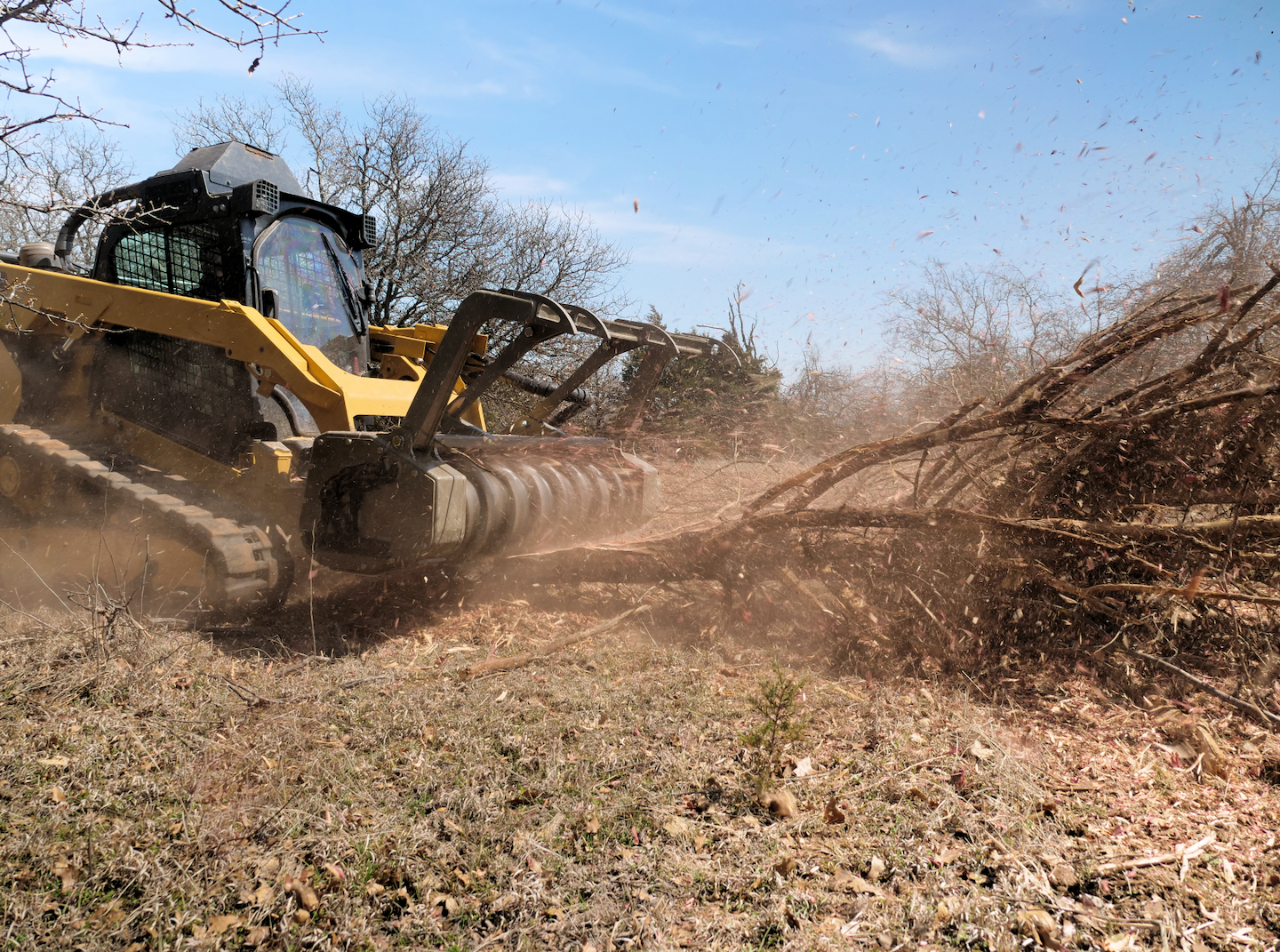 Mastodon mulchers can go from 30cc to 160cc instantly. They offer 700 ft. lbs. of torque down low. On the upper end they operate at 2,500 rpm.Dougherty Forestry Mfg.

Then you must consider the variability of the carriers utilized. Some utilize gear pumps while others utilize piston pumps, and they all have unique flows and pressures. One mulcher attachment must interface with all of these different carriers. “That's why you see a lot of people send a technician out to set the displacement on the motor and set the shift point pressures,” explains Dougherty.

To eliminate the problems caused by feedback from hydraulic pilot signals caused by pressure spikes and address the variability of pressures and flows from the carrier units, Dougherty Forestry Mfg. decided to pursue ECU controls on its Mastodon mulchers. “There are motors that shift electronically. Then you have to connect that to an ECU,” explains Dougherty. But then the real work begins. “You have to write software for it.” This was the most complicated part of the development process. “It took quite a bit of R&D to get the software to do we wanted it to do.”

“Once we did that, now it's driven by the ECU, it is independent of the hydraulic system,” says Dougherty. “You can make it shift ahead of the curve.” The attachment can react proactively. For instance, a skid-steer loader can lose 40 to 50 percent of its hydraulic flow volume as the loader arms are lifted. “Depending on the machine, they pull that volume and they put it to the lift arms.”

Get ahead of the curve

With a traditional mulcher, the speed may drop from 2,000 rpm to 1,000 rpm and then you have to wait until the speed comes back up before you begin mulching. The software in the Mastodon mulcher can predict the change in flow and compensate. “We have the software say this guy's trying to lift the arms and it shifts ahead of the curve, so that when he lifts the arms you don't lose any RPMs,” says Dougherty. 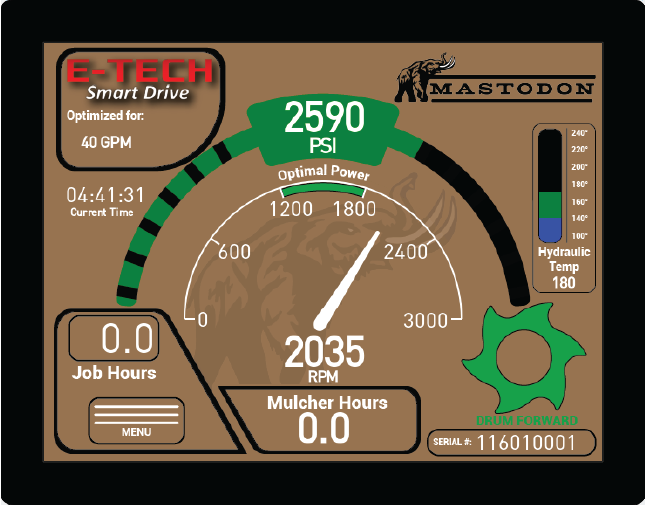 A circular gauge gives the operator a clear indication of where they are working. This is important as many operators try to gauge drum speed based on sound, which can be deceiving and lead to lower productivity.Dougherty Forestry Mfg.

This whole process works without operator intervention. “From the operating standpoint you don't know what it's doing. It just works really good,” notes Dougherty. This technology is also able to detect the flow and pressure output from the carrier and adjust for optimized performance. No more guessing or having technicians come out to make adjustments. Dougherty Mfg. has discovered many manufacturers underestimate the actual flow their machine’s produce. “It’s hard to tune something correctly if none of the numbers are correct.”

A side benefit of being able to view the actual flows and pressures on your smart phone is that you can actually see when your flow starts to drop and your filters need to be changed.

Another benefit of using an ECU to control the shift is an ability to use a larger displacement motor. “A lot of mulchers can’t really shift very far because the limit of that hydraulic pilot signal,” says Dougherty. “They might shift from 110cc down to 80cc. There’s not a big window there. We can go from 30cc to 160cc instantly. It’s got 700 ft. lbs. of torque down low. On the upper end we’re doing 2,500 rpm. We can really dial in that shift point to deliver the torque right when needed.”

“There’s a point where at full rpm you don’t have a lot of torque,” he adds. “At full torque you don’t have any rpms, it is stalled out. There’s a sweet spot right in the middle where you get that maximum power.” Through it’s optional operator’s display, a circular gauge gives the operator a clear indication of where they are working. This is important as many operators try to gauge drum speed based on sound, which can be deceiving and lead to lower productivity.

Typically, the only feedback you get from many mulchers is from the pressure gauge. “The pressure gauge really only tells you when the mulcher is stopped,” says Dougherty. “If your system is 3,000 psi and your gauge goes to 3,000 psi, the drum is stopped. It’s hitting maximum pressure. That’s really not that useful when you are in the woods.” 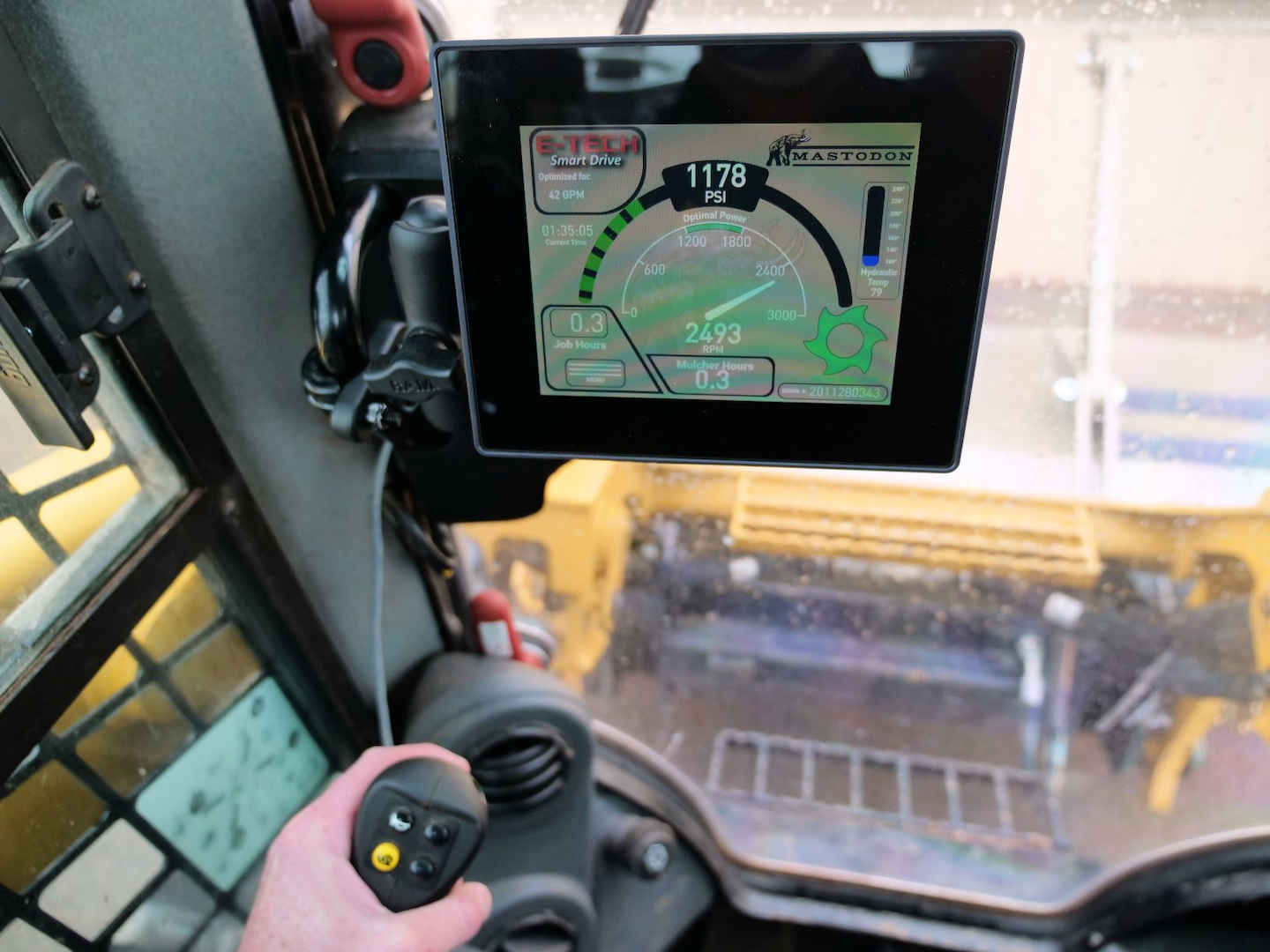 Recovery time is also important to address overheat concerns. When the attachment comes up to speed, it coasts and cools down. “Our recovery time is four seconds from 0 up to 2,500 rpm,” notes Dougherty.

Finally, being able to track hours is not only important from a utilization and maintenance standpoint, it also helps prove billable hours. “The mulchers are now pretty expensive by the hour,” he explains. Custom cutters may charge $150 to $250 an hour. “The landowners are reasonably concerned that all of those hours on the skid-steer loader are actually time spent mulching. Now you can show them your phone and say we started at 88 hours and now it is at 102 hours. There is not really any argument there.”

How to Match Mulching Attachments to Your Skid Steer

Maximize the Return on Mobile Mulchers

June pause came after May produced the highest level for the Momentum Index since March 2009
Dodge Data & Analytics
July 10, 2013

CFO confidence index surges 13% in first quarter of 2013, with concerns about finding skilled workers at the top of the worry list
March 28, 2013

Three-point-hitch attachment will crush 6-in. stones and mulch 10-in. logs
Seppi
September 17, 2012
Attachments

Check out the Profit Matters channel. There is how-to information, articles and more to squeeze the most profit from your projects and improve your bottom line.
May 1, 2021
Follow Us