Travis Landchild, a combat veteran, and his service dog, Nightshade, work together at Lowe's, helping customers with construction equipment and materials. 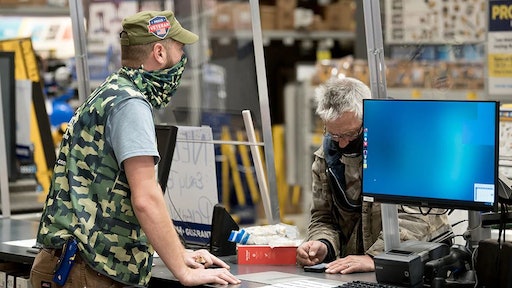 When his assistant managers came to Dave Helmick, a Lowe’s store manager in Willoughby, Ohio, to discuss a prospective hire, and his dog, Helmick took time to consider it.

Travis Landchild, a combat veteran, and his service dog, Nightshade, go everywhere together. An Air Force veteran himself, Helmick has hired vets before. But 'hiring' a service animal was a first.

“My assistant store managers are empowered to hire,” he says. “They don’t need me to say yes or no. But they came to me with Travis because Nightshade was part of the equation. We had some discussions on processes; you know, how does it work with a service animal being around power equipment?”

It didn't take much to figure out the parameters, and Landchild and Nightshade became a part of the Lowe's family.

Landchild, who joined the military the day after 9/11, and Nightshade started at Lowe’s in early October and have become part of the family at the Willoughby store. Nightshade is almost like the store’s mascot, Landchild says.

“She’s getting along with everybody and now taking naps behind the PRO department every day,” he says.

He found Nightshade, a Rottweiler/Australian shepherd mix, at the Humane Society 10 years ago and watched YouTube videos to learn how to train her to care for his specific needs.

Landchild was a mental health specialist, one of only 300 in the entire Army. During peacetime, he was stationed in Schweinfurt, Germany. He also served during war in Baghdad and was one of three mental health resources for 20,000 soldiers. In Baghdad, he counseled 3,000 of them.

Some had just witnessed a member of their squad get wounded or killed.

“The Blackhawk would come in, pick up the wounded and the soldiers would be in formation to salute their brother flying out,” he says. “And right after that, they would be broken into three groups, and we would take the whole platoon and do the ‘critical event debriefing,’ where we’d listen to what happened from everybody's perspective and provide whatever guidance we could.”

“Nightshade is aware of our surroundings and alerts me as anybody approaches from behind,” Landchild says. “She’s older and a bit more chilled out, and so am I, but her primary role is still notifying me when I’ve been triggered. Triggers don’t really go away. It’s been 10 years since I was in the war zone, but for me, it was last night.”

It doesn’t take much, he says.

“Being in a room where a bunch of people are between me and the exit creates a trapped feeling, a common trigger," Landchild says. "‘Trigger’ doesn't mean someone made me mad. It means something happened, and for a second, my brain is in the war zone. Nightshade picks up on that agitated state, even though I might, on the outside, not show any symptoms.”

Soon after Landchild started as a loader in the PRO department, Lowe’s corporate office received a letter from Edward J. Grabowski to congratulate the company for hiring “a legend.”

“Your Willoughby, Ohio store just hired a person and his service dog: Though we have yet to meet, Travis is a legend in the veteran community for his work in assisting troubled veterans. I personally wish to thank Lowe’s and the Willoughby store . . . for hiring an exceptional veteran whose off-the-clock work has saved hundreds of veteran lives.”

Landchild trains other veterans as mentors.

“I used to talk down suicidals, but now I train other people to do the same work,” he says. “In the veteran community, we have a suicide epidemic. Since 9/11, we’ve lost about 8,000 soldiers in Iraq and Afghanistan. And in that same period, we’ve lost more than 220,000 soldiers to suicide in America.”

He’s also known for “Stick Vet,” the comic strip he draws about veteran life in the civilian sector. His StickVet Facebook page has more than 45,000 followers. The book, “Stick Vet Comics: Let’s Get One Thing Straight” is available on Amazon.

Helmick is glad Landchild and Nightshade are part of the team.

“This is good for the store and good for veterans,” he says. 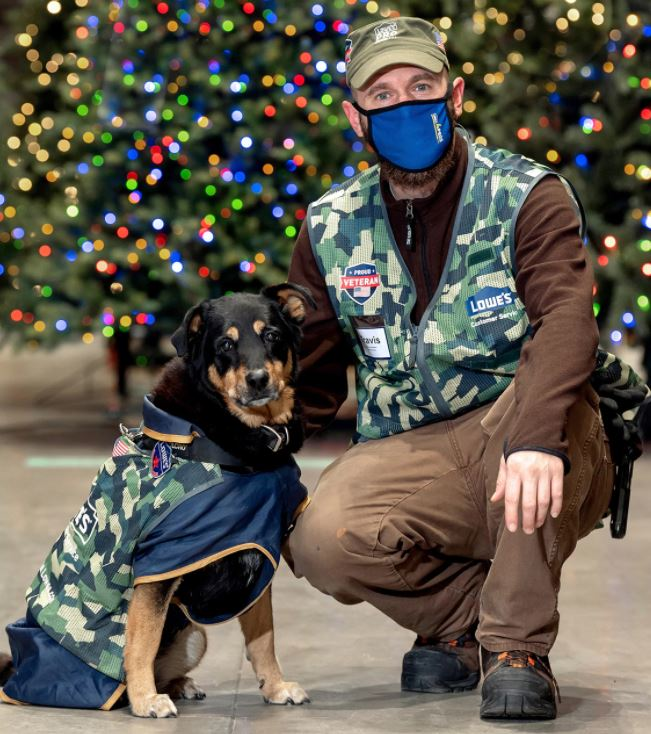 During busy rental periods, it’s important to evaluate the pedestrian trencher models currently in your fleet to determine which ones your customers like the best or whether you need to expand your fleet offering.
Vermeer
May 7, 2021
Follow Us