Profits down 44% due largely to mining freefall; preliminary 2014 outlook flat 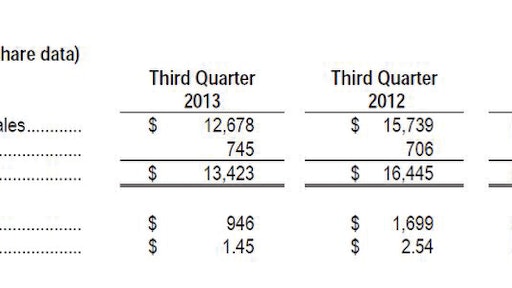 Cat revised its 2013 outlook and now expects sales and revenues to be about $55 billion -- about 14 percent below first-of-the-year forecasts after three quarters of downgrades -- with profit per share of about $5.50.

“This year has proven to be difficult, with expected sales and revenues nearly $11 billion lower than last year," said Caterpillar Chairman and Chief Executive Officer Doug Oberhelman.? "That is a 17 percent decline from 2012, with about 75 percent of the drop from Resource Industries, which is principally mining. We expect Resource Industries to be down close to 40 percent for the full year and Power Systems’ and Construction Industries’ sales to each be down about 5 percent.”

Not only is mining down from 2012, the demand for equipment has been difficult to forecast. Orders for new mining equipment began to drop significantly in mid-2012. As a result of weak orders and feedback from end users, the sales and revenues outlook provided in January of 2013 included a decline in mining sales. At that time, based on strong mine production for many commodities, the company’s outlook expected that order rates would improve later in 2013.

“Unfortunately, order rates have not picked up much despite continuing strong commodity production," Oberhelman said. "That has caused us to ratchet down our sales and revenues outlook as we have moved through 2013,”

The steep 2013 decline in sales brought about substantial actions to reduce production, costs and employment, including many temporary plant shutdowns, a reduction of more than 13,000 of Cat's global workforce, temporary layoffs for thousands of salaried and management? employees, reductions in program spending, substantially lowered incentive pay, lower capital expenditures and implementation of general austerity measures.?

The company expects to limit the decline in 2013 operating profit from 2012 to about 30 percent of the sales and revenues change. This is at the high end of the company’s incremental operating profit pull through target range and is a result of unfavorable product mix as the sales decline is weighted toward higher margin mining products.

2013 has, nevertheless, been a good year for cash flow. In the third quarter, the Machinery and Power Systems (M&PS) operating cash flow was $2.1 billion, and the company is expecting 2013 to be its second best year in history for cash flow and not far from the all-time record. Strong cash flow has enabled the company to improve its balance sheet, repurchase $2 billion in Caterpillar stock this year, raise the quarterly dividend by 15 percent and improve the debt-to-capital ratio. Debt-to-capital was 34 percent at the end of the third quarter -- substantially better than the 58 percent recorded at the end of 2008 -- and is expected to improve by year end.

"With $11 billion coming off the top line, it has been a painful year and has required wide ranging and substantial actions across the company," Oberhelman said. "Year-to-date, excluding the impact of inventory absorption, we've lowered costs about $700 million and reduced capital expenditures by about $400 million. We've continued to improve our operational performance this year, and it's unfortunate that the improvements we've made have been far overshadowed by the sales decline in mining.

"Safety levels in our factories continue to improve, and product quality is better — we see it in our metrics and are hearing it from dealers and customers," Oberhelman added. "While our machine sales are down, in most industries, including mining, we're doing better than our competitors as a whole and that includes those in China. Our year-to-date sales in China are up, including an increase of almost 30 percent in the third quarter of 2013.

"In addition, our Power Systems segment has done a good job this year. It's our largest segment with sales and profit that has been relatively stable in 2013."

Caterpillar expects better world economic growth in 2014 but tempers its preliminary outlook, acknowledging global risks and uncertainties. The direction of U.S. fiscal and monetary policy remains uncertain; Eurozone economies are far from healthy and China continues to transition to a more consumer-demand led economy. In addition, despite higher mine production around the world, new orders for mining equipment remain very low. As a result, the company is holding its outlook for 2014 sales and? revenues flat with 2013 in a plus or minus 5 percent range. The company expects 2014 sales growth in Construction Industries, relatively flat sales in Power Systems and a decline in Resource Industries’ sales.

“There are encouraging signs, but there is also a good deal of uncertainty worldwide as we look ahead to 2014, and our preliminary outlook reflects that uncertainty," Oberhelman said. "Despite prospects for improved economic growth and continued strong mine production around the world, we won't be increasing our expectations for Resource Industries until mining orders improve.

"We can’t change the economy or industry demand, but we've taken many actions to align our costs with the environment we’re in currently. While we’ve done much already, we're not finished and expect to take deeper actions to improve our cost structure and balance sheet. We're not seeing bright spots in mining yet, but the turnaround will happen at some point, and when it does, we'll be ready to respond."