Cherry Companies of Houston, a member of the National Demolition Association (NDA)’s Construction Industry Advisory Council (CIAC), served as host to a group of aspiring demolition and construction industry professionals. 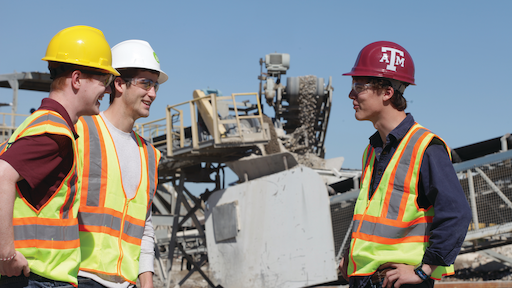 A contingent of construction science majors from Texas A&M University traveled from the classroom to the work site and got a close-up look at one of the nation’s leading demolition and recycling operations. Cherry Companies of Houston, a member of the National Demolition Association (NDA)’s Construction Industry Advisory Council (CIAC), served as host to the aspiring demolition and construction industry professionals.

“We have a great time exposing these students to the role that specialty contractors play in the construction industry,” said Leonard Cherry, president of Cherry Companies and past president of the National Demolition Association. The Texas A&M program works closely with the NDA to pique students’ interest in the many aspects of commercial construction work, including estimating, scheduling, project management and contract law.

“The NDA is most interested in establishing relationships with schools like Texas A&M and our long-time ally, Purdue University, so that our members meet construction science students and vice versa,” said Kim Wieland, Director of Member Services for the NDA.

The idea is to encourage students to consider careers in demolition and for our members to get a chance to recruit some of the nation's finest construction science majors.

The NDA offers internship opportunities to construction management majors interested in the field.

Back at the Cherry Companies operation – while other Aggies might be pursuing weekend activities of a different sort – the 25 students traveled from College Station to Houston to view some of the latest demolition and recycling techniques.

Cherry specializes in removing a variety of structures – from highways and bridges to industrial plants and commercial buildings – and instead of dumping debris in landfills, the companies recycles the vast majority of what it demolishes. Among the most commonly recycled materials are concrete, asphalt, steel, composition shingles and tires.

Cherry’s recycling operation has made the company one of the largest recyclers in Texas and the Gulf Coast area, producing collectively at all of its recycling centers more than two million tons of recycled, stabilized materials annually for use in everything from parking lots and underground utilities to pipeline support and storm sewers.

The tour included a visit to the site of last year’s implosion of Houston’s Macy’s department store. There, a crew of more than 120 workers from various Cherry divisions had worked to coordinate all aspects of the 10-story building implosion. Workers were able to remove and recycle some 50,000 tons of material by the time the job was done.

“I really appreciate getting to learn more about how demolition specialty contractors like Cherry work, because it gives me better insight about bringing these types of companies on future jobs,” said senior Blake Bell, who has already lined up a project manager job with Balfour Beatty, a global infrastructure services business. “And we’re glad to spread the word about how environmental stewardship is core to the mission of the NDA,” added NDA’s Wieland.

When every crew member installs things the same way, your crew will improve their speed and field efficiency, productivity rate, and standardize your cost estimating variances.
George Hedley
July 1, 2020
Follow Us