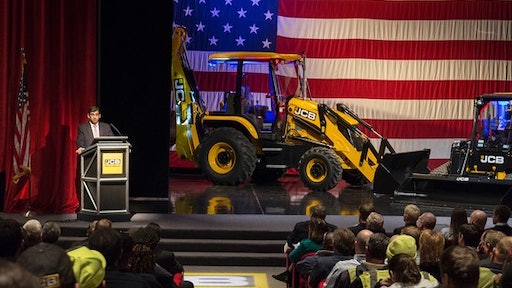 JCB hosted the kick-off I Make America event at its North American Headquarters in January.

The Association of Equipment Manufacturers (AEM) honored JCB North America with its “Pillar of the Industry Award” as part of its annual I Make America initiative. To be eligible for this award, a member company must demonstrate its involvement in their local community to take action on state and national issues effecting manufacturing.

“The manufacturing industry is truly the backbone of the North American economy,” stated Arjun Mirdha, President and CEO of JCB North America. “Manufacturing creates and sustains many jobs in the United States and Canada, employing thousands of workers who continually conceive and build state-of-the-art equipment. As a manufacturing company, we feel it’s both our duty and our privilege to support this hard-working industry, and we’re incredibly honored to receive this prestigious award from AEM.”

JCB was recognized for its role in advocating pro-manufacturing solutions to elected leaders and for its participation in AEM’s “I Make America” grassroots program, a program which JCB kicked off for 2015 at its Savannah, GA-based headquarters last January.

“We were elated to be selected to kick off this year’s I Make America Campaign,”said John Patterson, Chairman of JCB Inc. “Our entire staff participated in support of manufacturing. Every single employee within our organization can help make this campaign a success to keep manufacturing in America strong.”

I Make America will celebrate its fifth anniversary this year. The program was launched to engage AEM member companies and their employees to become champions for the manufacturing industry.

“AEM is proud to bestow its Pillar of the Industry Award to JCB to recognize its efforts to go above and beyond its daily business and become a champion for our entire industry,” said AEM President Dennis Slater. “Because of its commitment to pro-manufacturing solutions, JCB does stand as a 'pillar' that helps support the foundation of our entire manufacturing economy.”