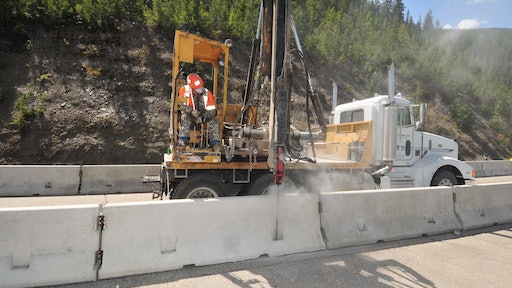 What would you do if you had the opportunity to work on a job that was three times as large as anything you or your company had ever done before? This challenge was presented to Frank Gurney Inc., a subcontractor out of Spokane Valley, WA, after it won a bid to drill seven miles of concrete barrier on I-90 between Mullan, ID, and Lookout Pass, MT. The company took a creative approach to drilling the holes, which would up paying dividends in the long run.

The interstate project, which began on April 22, 2015, required 12,500, 1 1/4" x 18" holes be drilled between Mullan and Lookout Pass on I-90 to mount concrete barriers for traffic channelization. The concrete barriers were the initial phase that would allow ACME Concrete Paving to come in and tear out the old roadbeds, so that it could repave a new concrete roadbed in each direction.

Frank Gurney Inc., which was established in 1959, specializes in highway guardrail, concrete barrier, impact attenuator and signage installation. Working almost exclusively for governmental agencies, the family-owned business had carved out a niche for themselves in Eastern Washington.

When tasked with by far the biggest project in the history of the company, Frank Gurney started to do some online research on what it could do to speed up productivity. A Chicago Pneumatic RDR 48 R hydraulic rock drill caught the eye of Chuck Hines, a superintendent at Frank Gurney. That began a process of designing and developing a plan to connect the rock drill to one of the guardrail installation machines. The highway contractor worked alongside Edge Construction Supply’s vice president of sales, John Cervelli, who provided the hydraulic rock drill to perform initial tests.

The tool turned out to be exactly the right fit to go on Frank Gurney Inc.'s punch machines to drill through the pavement to install the anchor pins. After the initial tests were a success, Frank Gurney purchased four additional hydraulic rock drills from Edge Construction Supply for the I-90 application.

“The amount of drilling we had to do for this job would have really brought anybody to their knees. We probably would have done more harm to humanity than good if we tried to do the I-90 job all by hand with a handheld drill,” said Tom Stewart, president of Frank Gurney, Inc.

Using previous methods, Frank Gurney could drill anywhere from 500 to 600 holes on average per day. Utilizing the guardrail installation machine, the contractor doubled the productivity to 1,200 holes per day, which led to completing the I-90 job a month ahead of time. This made Frank Gurney Inc. completely rethink the way it operates moving forward.

“We’re a contractor and a contractor is only as good as their last job,” said Stewart. “Anchoring concrete barriers are a big part of what we do and is the initial part of many projects. Our rig sped up productivity immensely and we will be changing our method of installation moving forward, especially to this process if the job requires going through concrete.”

HIPPO Multipower's Concrete Cutting Power Unit (CCPU) features a hydraulic pump that can run either single or dual tool circuits at a variable combine output of up to 30 gpm
HIPPO Multipower
July 17, 2018

H.E.C.'s hose end chamber line provides operators with hassle-free recoupling of hydraulic attachments by coupling to the end of your hydraulic hose after it is uncoupled from the power source
Hose End Chamber (H.E.C.)
July 7, 2017

Hydraulic Handheld Tools Give Contractors a Break from Tier Changes

With the development of Tier 4 Final equipment and the subsequent rise in costs, contractors are reevaluating their applications and taking a look at more economical options, such as hydraulically powered tools and equipment.
Gus Armbruster
October 5, 2015