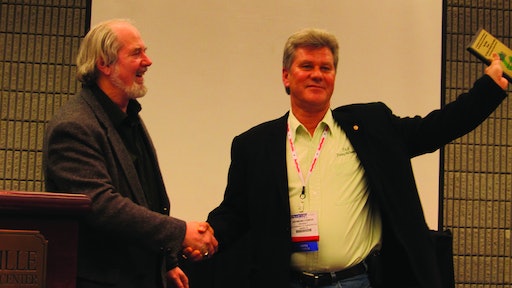 Ray Confer (right), president of C&J Parking Lot Sweeping, Warren, MI, accepts the 2011 WorldSweeper.com Award of Excellence in Power Sweeping from Ranger Kidwell-Ross, editor of WorldSweeper.com. Confer, who received the award at the National Pavement Exposition in February in Nashville, has 33 years of experience in the sweeping industry and runs a 50-person company with more than 40 sweepers servicing almost 1500 accounts.

The first licensed SealMaster manufacturing and distribution location in Canada will be opened by Canadian Shield Pavement Preservation Products, Ltd. in Brantford, Ontario, according to Don Galliers, managing director of the international division of ThorWorks Industries, parent company of SealMaster. Galliers said the facility should be operational by late spring, joining 25 manufacturing locations and 70 sales and distribution centers in the U.S. as well as manufacturing locations in China, Australia, and Mexico.

Meredith Ware is the director of sustainability for Bonsal American, Charlotte, NC, where she works to marshal and expand the company's sustainability initiatives. She works with the design and manufacture of sustainability principles of Sakrete, ProSpec, Amerimix, and GemSeal branded products.

Arizona topped the rankings for the first time this year based on the state’s promotion of free enterprise and investment in tomorrow’s construction workforce
Associated Builders and Contractors Inc. (ABC)
December 30, 2020

The Future of Data and Privacy in Construction's Digital Age

As the construction industry wades further into a digitized future, it is imperative that companies exercise caution in regards to data.
Association of Equipment Manufacturers (AEM)
December 28, 2020
COVID-19

The construction industry's never had to deal with so many unknowns, and StructionSite recommends a method contractors can use to evaluate, prioritize and act to reduce their risks without being overwhelmed
December 22, 2020
Follow Us