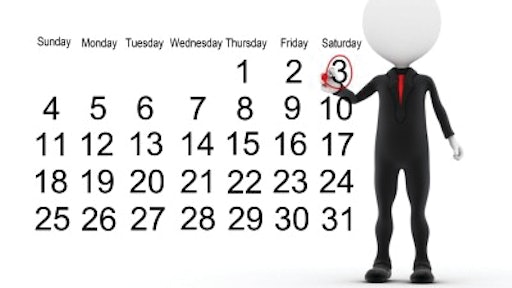 Review all updated general contractor schedules to prevent any possible penalties for missing a scheduled deadline.

Inside the bag of tricks all general contractors have there is one that is their stealth weapon for ensuring you do exactly what they want you to on their project. That weapon is the official project schedule.

When you sign a contract with a GC, buried somewhere in that contract will be a clause requiring you to complete your work in accordance with the project schedule. That clause is a ticking time bomb. At some point in time it is very likely to blow up in your face.  The crazy part is that most subcontractors are unaware that they can use the official project schedule to their advantage in the never-ending give and take with the project manager and superintendent.

GCs tend to provide very sketchy schedules to bidders. Typically, the GCs are rushing every bit as fast as you are to pull together pricing for a bid. To build a detailed project schedule for every project they bid would potentially waste a huge amount of time.

For that reason, rarely do subcontractors see a detailed project schedule prior to bid award.  Without having a schedule to analyze, subcontractors are forced to assume that a reasonable schedule will be used - specifically one that allows their crews to work at their usual speed.

You should master the ability to figure out whether the sketchy time line the design team and project owner have laid out for the project is reasonable for a project of that size and complexity; and if not, how much crew productivity is likely to slip due to a compressed work schedule that results in the stacking of crews. Naturally, highly experienced contractors have an advantage over newer contractors in performing this task as they have a much larger library of projects from which to draw comparisons.

Taking this first step will lead you to better qualify the opportunity and avoid the ones that are likely to turn into nightmares. Knowing which projects to bid on and which to avoid is very important in the construction industry. Often, a contractor can improve his bottom line greatly just by avoiding a handful of bad jobs each year.

Around the time you are presented with a contract to sign you should receive a detailed schedule. Review it closely! You still have time to walk away from the job if the schedule is unreasonable.

As a side note: always write a condition into your proposal during bid that your price is contingent on a project schedule that allows your crews to perform at their historic speed. The GC will not even look at that statement until it's time to award the work and is likely to overlook it until you mention that either: your must raise your proposal price or you must withdraw your offer.

If your team determines that the schedule is reasonable, file one copy in the project folder, one in the project manager's office and give one copy to your site foreman or superintendent. This is the mistake that most subcontractors make. They throw or lose the original schedule. Never throw away the schedule that goes with your contract.

The trick GCs often get away with is accelerating the project schedule without bringing it to the subcontractors' attention. They often deploy the new schedule with statements along the lines of "We've had to update the schedule as the project is behind. Here is your new schedule."

As the GC has compacted the schedule, odds are your crews are not going to be able to work as fast (productively) as you expected and priced. Don't you deserve to get a change order that makes up for the additional cost you suffer due to lost productivity? Of course you do.

How are you going to justify the change order without having the original contract schedule in hand to demonstrate the compression the new schedule is requiring? You can't. Without the original schedule to baseline the new project schedule against you have no legitimate case for your claim for additional monies.

Furthermore, you still are subjected to that cute little clause in the contract that states you are required to finish the project in accordance with the schedule or you may be held liable for liquidated damages or other back-charges.

Every time a GC hands an updated schedule to your foreman, superintendent or project manager they MUST review it against the most recently agreed to schedule (possibly the original contract schedule) to see whether your time frame is being squeezed and a change order is justified. If so, you need to write a letter to the GC informing him that you do not accept the accelerated schedule without additional compensation and/or the removal of the penalties associated with running late.

And here is the real bummer associated with the way GCs play the schedule game.

When they accelerate the project schedule and you respond with "ok," you're not only going to run over on labor cost but you've greatly increased the odds that you'll be hit with a back-charge. Furthermore, you've increased the likelihood that the GC or owner will withhold payment on your last two pay applications as motivation to get you to throw unlimited numbers of workers at the project to finish faster. Once you're off the job you'll probably get your second to last pay application paid but will not receive your last pay application payment nor your retention until you agree to a back-charge for missing the project schedule's deadlines.

The only way to avoid the financial problems just described is to:

GCs can't stand having paper trails that will work against them in arbitration or court. They will complain like mad, throw tantrums and all else when you push back on the schedule, but deep down inside they will know you are right and that sooner or later they will have to bend if they want to finish the job on time.

What Every Sub Should Know