The total value of US construction put in place rose 1.4% in August on the strength of a substantial jump in spending on single-family housing, while big nonresidential sectors such as power, commercial, office and transportation sank 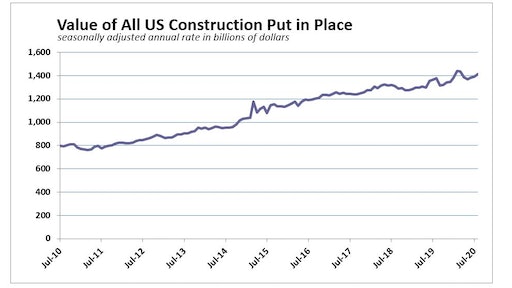 Even with a 0.1% slip in spending on multifamily housing construction, August delivered the third consecutive monthly gain in residential outlays, and residential construction spending has risen at a 6.0% annual rate over the past three months.

“The recent rise of single-family activity is owed to a confluence of factors, including near record-low mortgage rates, a ready-and-waiting wave of first-time home buyers and a shift in preferences for more livable space in order to adapt to spending more time at home,” says Mark Vitner, senior economist with the Wells Fargo Economics Group.

The effects of the COVID-19 crisis have been readily apparent on the nonresidential side for some time. Nonresidential construction spending slid 0.1% in August. Office spending fell 1.0%, as uncertainty about the long-term space needs of office tenants remains top of mind for developers and lenders.

Lodging slipped 0.4% on a monthly basis and is down 9.4% year to date. Hotel occupancy rates have improved since the spring, but remain severely depressed. Nationally, the occupancy rate sat at 46.8% for the week ending September 26, much lower than the 71.0% of the same week last year, according to Wells Fargo.

"The e-commerce boom should bolster warehousing and distribution center construction for years to come,” says Vitner. “Similarly, more time spent in virtual settings has led businesses to improve digital access and quickly expand IT infrastructures, which has driven-up demand for data centers.”Consumers’ social-distancing-accelerated transition to online shopping has weighed heavily on what was already a weak trend in retail development. Wells Fargo Economics reports construction outlays for retail projects are now down 17.8% on a year-over-year basis. The massive shopping shift continues to support new warehouse construction, which is up almost 16% year-over-year.

Facebook recently started work on a $1 billion data center in Tennessee, which was one of the largest nonresidential building projects started in August according to Dodge Data & Analytics.

“The good news is that nonresidential construction spending momentum remains apparent in a number of public segments,” says Associated Builders and Contractors’ Chief Economist Anirban Basu. “On a monthly basis, construction spending was up in the water supply (+1.8%), highway/street (+1.9%) and educational (0.6%) categories. Spending in the public safety segment is up nearly 40% compared to the same time last year.

“Absent an infrastructure-oriented stimulus package, the likely trajectory of nonresidential construction spending does not appear especially bright,” Basu adds. “Commercial real estate fundamentals are poor, with elevated vacancy rates and tighter lending conditions, rendering it probable that private nonresidential construction spending will continue to dip. State and local finances have been pummeled by the pandemic, resulting in less support for the next generation of public projects. Many contractors report declining backlog, according to ABC’s Construction Backlog Indicator, and fewer opportunities to bid on new projects. With winter coming and infection rates poised to rise, the quarters to come are shaping up to be challenging ones.”

“The August spending report shows a stark divide between housing and nonresidential markets that appears likely to widen over the coming months,” said Ken Simonson, the Associated General Contractors' chief economist. “With steadily rising business closures and worker layoffs, and growing budget gaps for state and local governments, project cancellations are likely to mount and new starts will dwindle.” 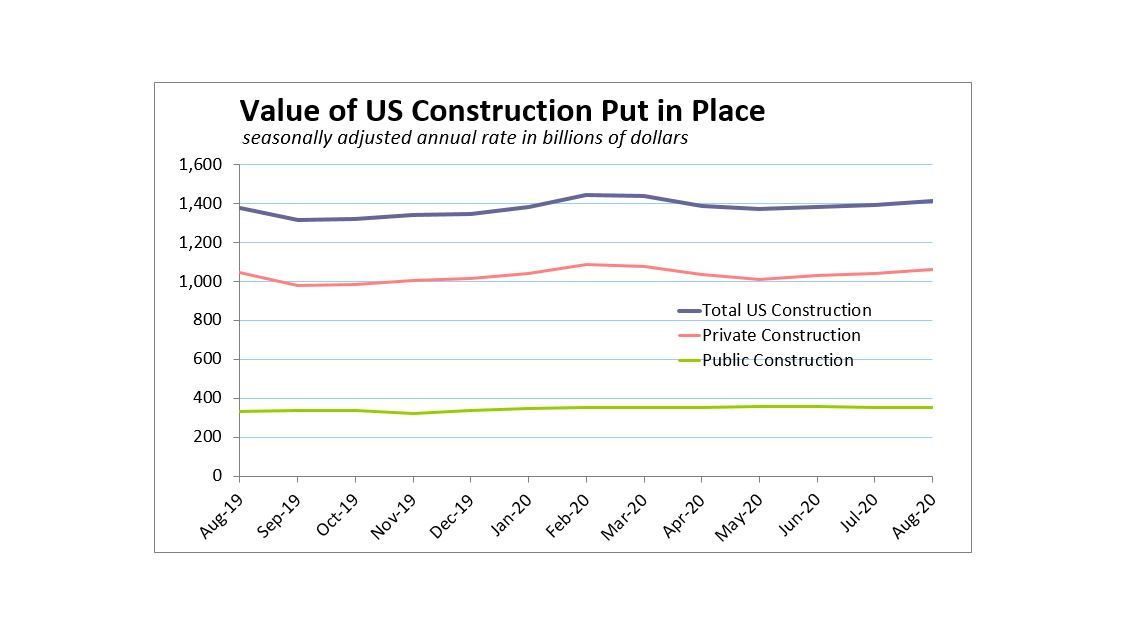 McKinsey & Company offers strategy and insights on how to protect your business from the next crisis and the uncertainty that surrounds it.
Gigi Wood
January 4, 2021
Follow Us