Since its introduction in 1996, Flex-Mat technology has revolutionized the screening industry, providing solutions to common screening challenges and a way to increase product value and return on investment. 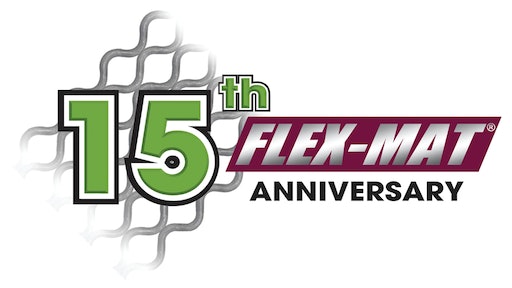 Since its introduction in 1996, Flex-Mat technology has revolutionized the screening industry, providing solutions to common screening challenges and a way to increase product value and return on investment.

Previously, self-cleaning screen media was mostly available through European manufacturers, resulting in long lead times and high costs for North American screening operations. Jean Leblond, president and CEO of Major Wire, solved this problem when he began locally manufacturing tensioned self-cleaning screen media produced without cross wires that lasts up to three times longer than traditional woven wire. Since then, Major Wire has been able to manufacture the product cost effectively with competitive lead times for screening operations throughout the world.

For tensioned screen decks, Flex-Mat 3's signature lime-green polyurethane strips align to the screen box's crown bars and hold individual wires in place as they run from hook to hook. It is available in the industry's broadest range of opening sizes — 30 mesh to 4 inches — and with the widest range of application-specific wire diameters.

On modular screen decks, Flex-Mat 3 is available in 1-foot x 1-foot and 1-foot x 2-foot panels to replace existing polyurethane and rubber panels on each deck wherever throughput is compromised or the entire deck for maximum production. Flex-Mat 3 Modular is available in a variety of attachment systems to fit virtually any flat-surface deck.